'Tis the season for indulgence and celebratory meals, so here we bring you a curated selection of what many Americans consider to be their prime choice of celebratory venues: steakhouses. San Francisco's long been a big meat-eating town, despite some of the Bay Area's more hippy associations, and we have quite a few high-end steak joints wherein one can blow thousands of dollars on Wagyu and wine. Also, we're home to some of the oldest of old-school steakhouses where everything is a la carte and waiters are all just a few steps away from assisted living. These are our favorites of the bunch.  Jay Barmann

5A5 Steakhouse
Built out for a different restaurant (Frisson) in the middle of the last decade, 5A5 has a mod, space-age dining room with a round, domed, coffered ceiling that already feels a bit dated in this age of reclaimed wood and Edison bulbs. Still, this place remains a draw for ballers and business tourists, and the service and wine are top notch. The star of the show, though, is fancy, expensive, Japanese Wagyu beef  along with US Certified Angus Beef and Australian ‘Kobe’  and the name of the restaurant takes its name from the five senses you experience when feasting upon grade A5 Wagyu. There are Japanese starters like Hokkaido scallops and tempura lobster, but particularly if you're being taken out for a business dinner you should have your eyes on the prize, which is steak. A bone-in ribeye (not Wagyu) comes topped with a brandy-peppercorn sauce, and will run you $64. They don't even give prices for the Wagyu (they also have 50-50 Wagyu-Holstein steaks) because they're AQ, but you can expect to be paying something in the neighborhood of $300 for an eight-ouncer, or $140 for a petite four-ouncer. Is wickedly tender steak worth that much? Ask your boss.  Jay Barmann
244 Jackson Street between Front and Battery 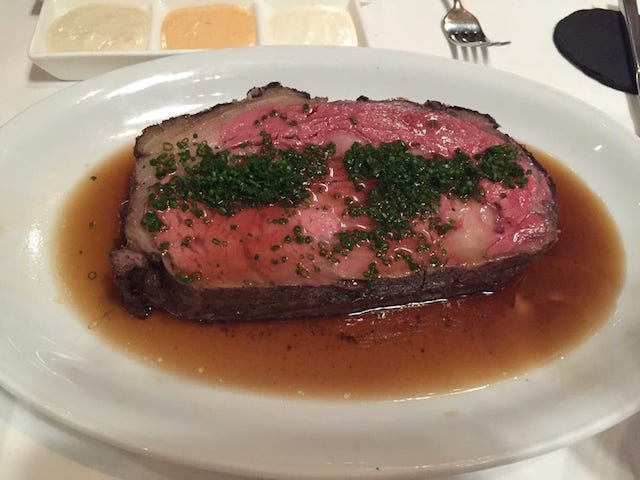 Alexander’s Steakhouse
A Cupertino favorite for years with, at one point, a Michelin star to its name, Alexander's opened up shop in a massive three-level space in San Francisco in 2010. Known for its Greater Omaha Prime beef, dry aged for 28 days, Alexander's also promotes imported and domestic wagyu beef, with the menu currently showing 15 different varieties, plus authentic Kobe beef. And just to emphasize how very much this is not a salad restaurant, Alexander's serves an "anti-salad," which is veal sweetbreads, foie gras, and animal vinaigrette." —Caleb Pershan
448 Brannan Street between Ritch and 4th Streets

Alfred’s Steakhouse
Opened in 1928, this white tablecloth and burgundy curtained restaurant tucked in a Financial District alley recently got a somewhat surprising refresh when the Daniel Patterson Group took over the reigns. Patterson, known for his modernist cuisine, provided a new-school update to the beef, going grass-fed to the minor chagrin of Chronicle critic Michael Bauer, while retaining the old-school, Mad Men-era fine dining vibes. That means your Martinis and Manhattans come with a refill in the shaker and your bananas foster get flambéed tableside. —Caleb Pershan
659 Merchant Street between Kearny and Montgomery Streets 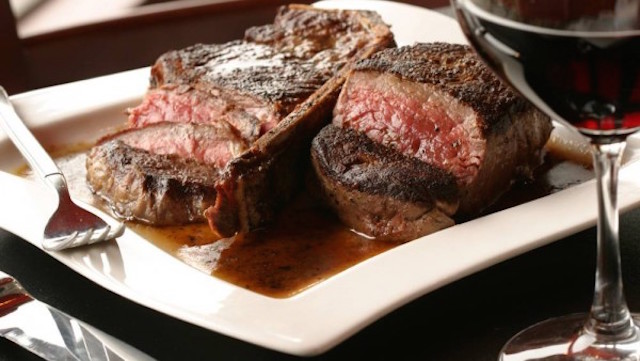 Bobo's
A classic steakhouse has a very particular feel to it: A sense of meaty decadence paired with white table cloths, and plenty of red wine to wash it all down. Bobo's, which focuses on dry-aged beef, prides itself not just on the atmosphere but on the way its meat is "dry-aged four to six weeks in a large, specialized facility that provides a sanitized and closely monitored environment." Basically, these guys aren't playing around. They pan sear their steaks, and insist that at Bobo's you'll get "the best steak you’ve ever tasted!" If you're more of a crab eater, then this steak house also has you covered. Chefs roast the whole crab and drizzle the resulting chitinous-encased chunks in crab butter sauce. Add in some baked potato and Brussels spouts and you're set. — Jack Morse
1450 Lombard Street, Between Van Ness Avenue and Franklin Street 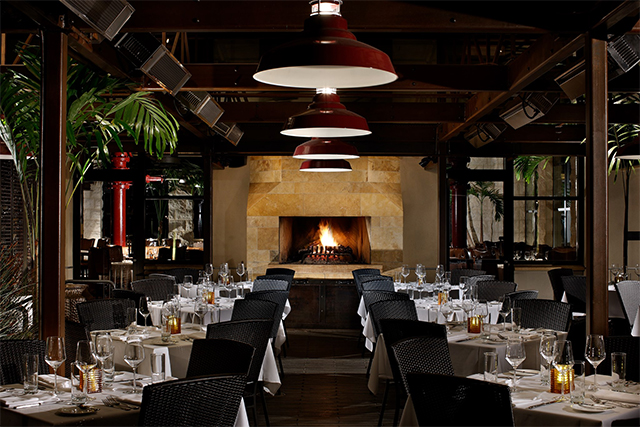 Epic Steak
This waterfront spot with incomparable views of the Bay Bridge and Bay Lights recently rejiggered things and changed the name from Epic Roasthouse, focusing on naturally raised, environmentally responsible meat and produce, grilled over wood. Executive chef and partner Parke Ulrich has been with the place since its opening over a decade ago, and accompanying the steaks you'll find raw bar items, and a number of seafood options. Prices top out with a $94 Tuscan-style Porterhouse and a $106 28-oz. prime côte de boeuf  so, again, expense accounts preferred unless you're super wealthy or celebrating something big. And, it should be noted, they have Japanese Wagyu here priced well under some competitors, with a four-ouncer for $98 and an eight-ouncer for $180.  Jay Barmann
369 Embarcadero 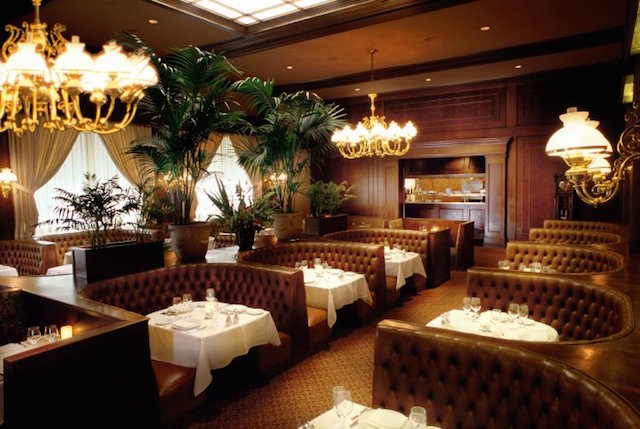 Harris’ Restaurant
The meat display that greets diners at Harris' should tell you right away that you've entered old school steakhouse opulence, an impression reinforced by rich leather booths, high ceilings and chandeliers, and oil paintings throughout. Diners can expect to be treated to highly professional service and precise cooking, while a trip to the bar where live jazz is a staple feels like a woozying step back in time. That could also be the stiff drinks, though. —Caleb Pershan
2100 Van Ness Avenue at Pacific Avenue 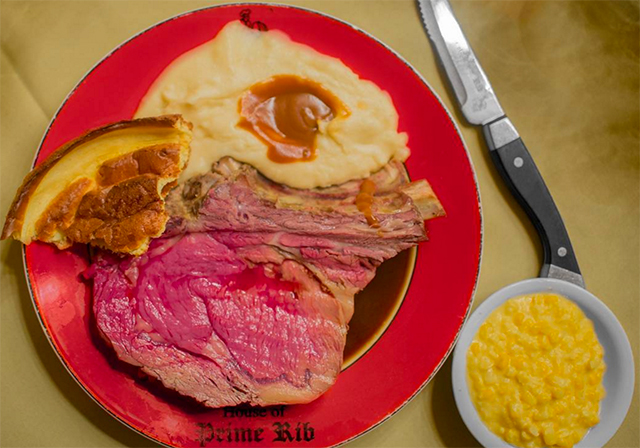 House of Prime Rib
If you're looking to time-travel to 1947 without messing with the space-time continuum, this Van Ness Avenue institution is a great substitute. The place is such a throwback that the setting almost upstages the food, with its red leather booths, free-flowing Martinis, salty waiters, and a giant stainless steel zeppelin on wheels that ferries the beef around the dining room. There's virtually nothing to order here besides prime rib, in a few optional cuts, and it's damn delicious if maybe salty for some palates. And it comes with Yorkshire pudding, mashed potatoes, creamed spinach, and creamed corn, just as it should. (Also, if you want something more like a ribeye steak, they'll actually sear a piece for you. Just ask.) — Jay Barmann
1906 Van Ness Avenue between Washington and Jackson 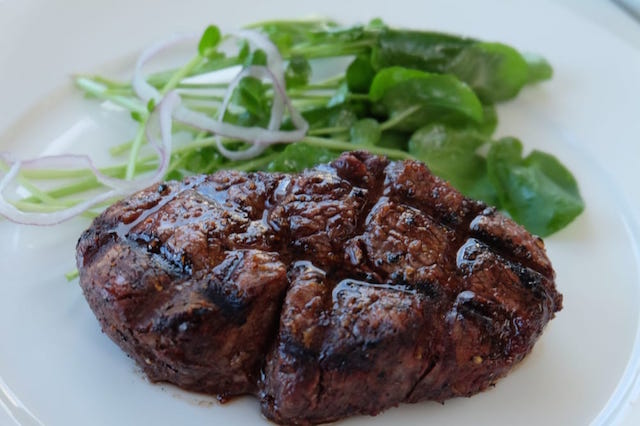 Leatherneck Steakhouse
The killer view offered from the top floor of the Marines' Memorial Club is enough of a reason to visit Leatherneck Steakhouse, but thankfully it's not the only one. Live piano will accompany you as you decide between prime rib, filet mignon, New York strip, rib eye, or one of the many other cuts served up. Although complimentary bread is provided, the appetizer of Dungeness crab cakes is recommended to properly start things off right. The steaks are certified Angus beef, and while there are plenty of fish options on the menu, just stick with the beef. This is a great date spot, and fancy threads are a must as there is a dress code. — Jack Morse
609 Sutter Street, Between Mason and Taylor Streets 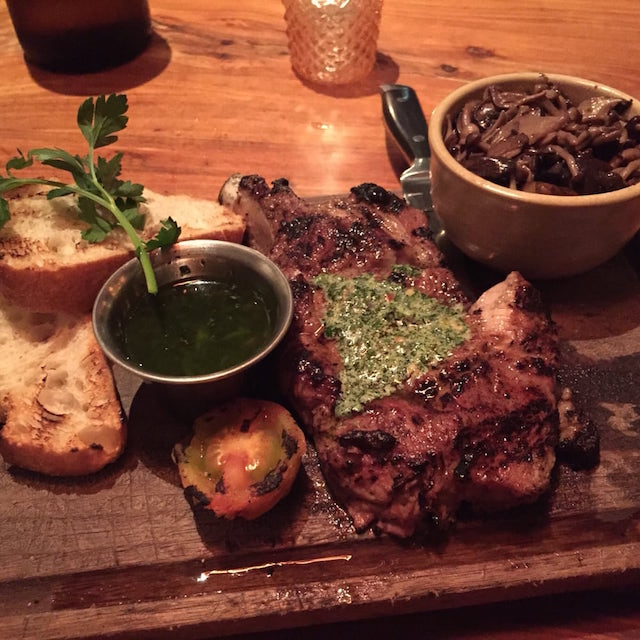 Lolinda
With Argentinian wood-fired meats and tapas in a large, two-story space, Lolinda opened in the Mission in 2012. It's perfect for meat lovers who might be tired of traditional American steakhouse sensibilities as well as for fans of Argentinean specialties — empanadas here are a must. Maybe you've enjoyed the view from this establishment's upstairs bar and restaurant, El Techo de Lolinda, but you should step inside for a more luxuriant experience. — Caleb Pershan
2518 Mission Street between 21st and 22nd Streets 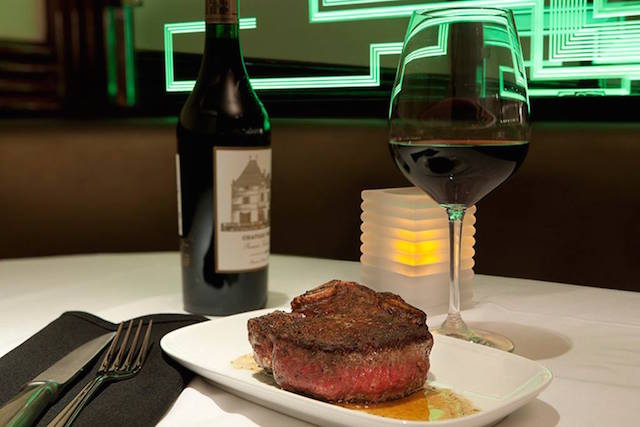 Osso Steakhouse
Retro dining on Nob Hill — surf and turf, caviar, et al. in a deco setting — awaits at Osso. Consistently praised for superior cuts of beef, this steakhouse is also a business-casual affair that usually ends in belt loosening and cheesecake. Crab lovers should take note that, Angus beef aside, Osso is, like brother restaurant Bobo's, known for its Dungeness too. —Caleb Pershan
1177 California Street between Jones and Taylor Streets

With the Bay Area arts scene gutted and shaken to the core by the tragic loss of life resulting from the Ghost Ship fire, numerous relief efforts have sprung up to benefit the

As we are constantly reminded, San Francisco is an expensive place. So much so that even stereotypically wealthy tech workers can have trouble affording it. With that being said, the news that rich