Pre-sale tickets to see the hit musical Hamilton as it tours San Francisco were selling like legit Broadway tickets today: Entering a queue at 10 a.m., American Express cardholders vied online to score seats at $100 to $190 for regular seats and even $524 for premium spots at the show as it pulls into town from March 14 through August 5. But according to SFGate, many thousands were left in the online queue helpless and ticketless.

#HamiltonSF ticket sales are over for AmEx cardholders - still over 60k queued when it closed pic.twitter.com/ICwe6YYmDX 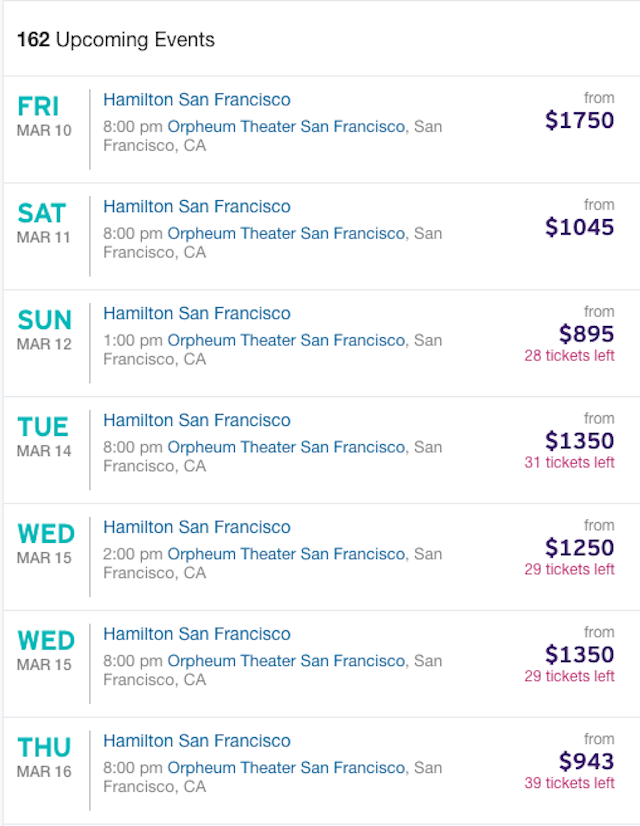 For those planning to play the de facto Hamilton lottery next Monday when general ticket sales start at 10 a.m., bear this in mind:

Please note: There is no advantage to being in the @HamiltonMusical queue prior to 10am. #Hamilton queue is randomized at 10am.

The brisk sales are further indication that San Franciscans couldn't give a shit about a proposed boycott of the the musical after a dustup following Vice President-Elect Mike Pence and his chilly reception at the show on Broadway. Anyway, see you on the other side!

Me waiting for Hamilton tickets in San Francisco ... pic.twitter.com/u0vGVt701r

With the June death of 41-year-old Heather Miller likely on the minds of some, community members gathered Saturday at Golden Gate Park’s County Fair Building to propose different approaches the city of

In some not so surprising news, ever since Uber and Lyft have been given free rein to pick up and drop off passengers at SFO, ridership on BART's SFO line has been steadily