"Whatever happened to predictability?" Back in the late '80s the Full House theme song longed for a simpler time, but at least we can rest assured now that the touchstone location of the well loved series, the house that represented the exterior of the Tanners' world, is in good hands. The Full House house at 1709 Broderick Street in San Francisco went on the market earlier this year and sold in August for $4 million, and now the Hollywood Reporter tells us that the buyer was none other than the show's creator, Jeff Franklin.

Franklin tells THR, "The house came on the market and really, I just thought, I have to buy this house. I'm so sentimental about the house. It's great to have the house in our Full House family and be able to preserve it for the fans.  Seriously, I love owning this house."

Franklin immediately painted the front door red again and returned the house to a light beige, as it was back in the '80s/'90s for that exterior shot, and he plans to remodel the interior  which, as we saw from the MLS shots, looks pretty nice these days  to resemble the way it looked on the sitcom. That could be difficult, given that the soundstage living room of the show looks nothing like the interior of the existing house, but Franklin also says that he'll be doing major construction for the next six months, retrofitting it with an earthquake-safe foundation, after which he hopes to use it for location shots for a presumed third season of the Netflix reboot.

It turns out they must have had to use CGI to create this exterior shot with those familiar paint colors for the Fuller House season one trailer, because the most recent owners had painted the house a dark blue, with a sea foam green door, as shown below. 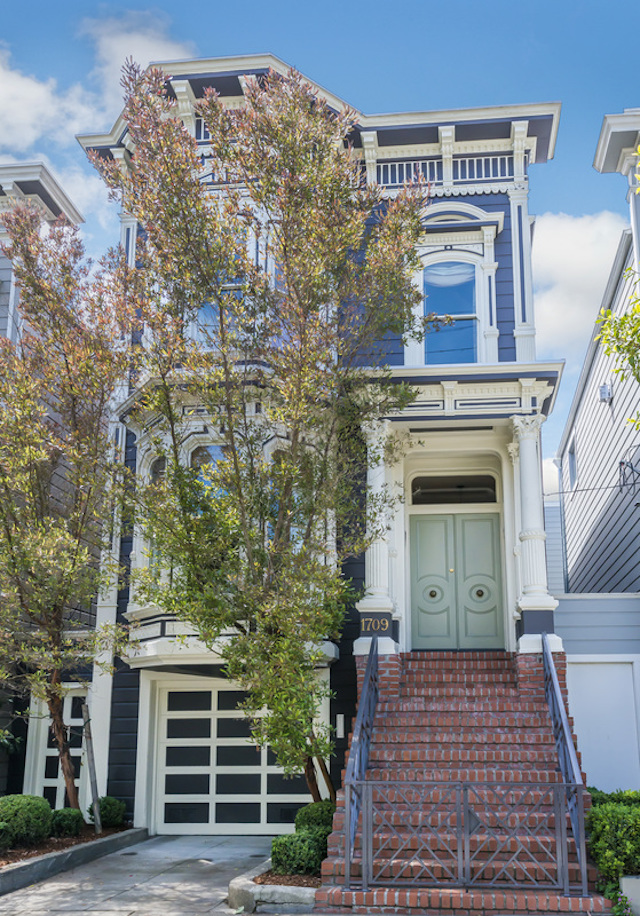 Tourists and fans of the show have sought out the otherwise cookie-cutter Victorian house for the purpose of selfies for years, and they flocked to it in even greater numbers earlier this year following the release of Fuller House on Netflix. (And, in one of the first episodes of the reboot, Uncle Jesse jokes about SF's real estate market saying, "Do you know how much this house is worth now?", even though all that was shot on a Southern California soundstage.)

Franklin claims about 250 people show up per day to shoot photos outside, and he tells THR he's glad to put the house back in Full House form, for the sake of the fans.

The house was being rented out this fall as a short-term rental for wealthy fans, for $14,000/month. And ultimately, post-renovation, Franklin says he plans to rent it out in some way, shape, or form, perhaps following the 30th anniversary of the show's premiere, which happens in September 2017.

At the very least, on Fuller House, we'll get to see non-CGI shots of the house with modern-day cars outside, because recent owners haven't wanted any more attention. Franklin tells THR, "No one has allowed us to shoot [at] that house since we did our very first stock shoot back in April of '87. Our audience has watched the same cars drive by that house now for 29 years. It's going to be really nice to see some new cars drive by the house."

"We are committed to providing a safe space for learning for each and every one of our students including recent immigrants regardless of immigration status," sounded a voicemail message intended to reassure parents