As the holidays are upon us, you're probably saying eff it to your healthy-ish lifestyle and eating and drinking whatever's put in front of you. For those of you who are exercising self-care these days through food, and actually seeking out some decadent indulgences, consider this your checklist. Otherwise, everyone else, you can just look at the pictures and go "Ew. Calories."  Jay Barmann

The Ringmaster at Straw
Straw's famed doughnut burger, which is an actual cheeseburger (both cheddar and Jack) sandwiched between two glazed doughnuts, is pretty tasty if a bit weird and guilt-inducing upon the first or second bite. "Am I really eating this?" you ask yourself. "It's kind of good but should I really finish this?" As you finish, you say, "I'm awful and I should get a trainer." And then a month or two later, you're back at Straw hungover at brunch, and you order it again.  Jay Barmann
203 Octavia Boulevard 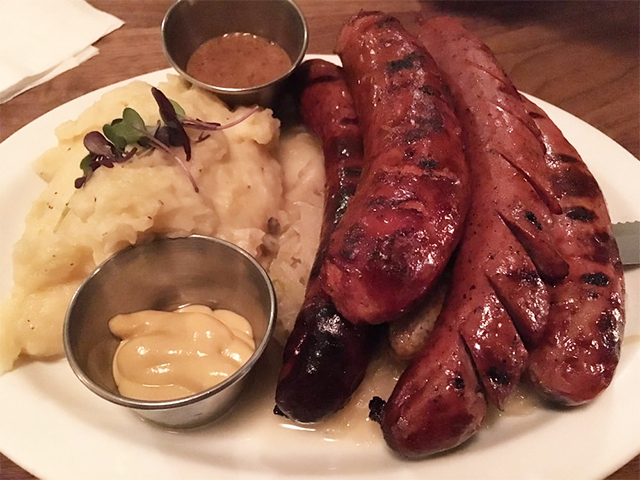 The five-sausage plate at Schmidt's
This wiener selection at Mission German spot Schmidt's includes a kielbasa, a wild boar bratwurst, a nurnberger, a chicken apple, and a duck bratwurst. Let's say the average chicken sausage is around 200 calories and the average pork sausage is closer to 300 calories, average it at 250, add in the mashed potatoes, and this is about 1500 calories right here, give or take, with a whole lot of saturated fat  and it'll likely get washed down by a couple of 400 calorie beers, so there's that too. Not recommended unless you're on Lipitor.  Jay Barmann
2400 Folsom Street at 20th 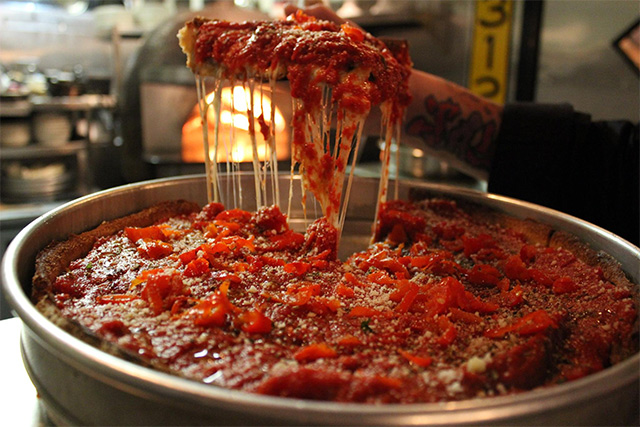 Any deep-dish pizza at Capo's
You know why they say the cast-iron, standard deep-dish, and stuffed pizzas at Capo's aren't vegetarian? Because there's lard in that crust. That's partly why it tastes so rich and good, and why you can probably only eat two pieces before giving up. Don't get me wrong, this is some damn delicious pizza, especially the super-caloric "Big Jim" Colosimo Triple Double, which comes filled with two kinds of sausage, pepperoni, meatballs, bacon, three cheeses, and a few vegetables just to mix it up. Just don't tell your doctor.  Jay Barmann
641 Vallejo Street

Banana Split at ShakeDown Ice Cream
What I admire most about the banana split is that someone took what's a relatively healthy food, a fruit, and added some nuts, which are also mostly good for you, and then mixed it up with some very good but very bad for you ice cream and then some fudge and whipped cream etc. etc. That's real ingenuity, and ShakeDown, the Tenderloin ice cream parlor that opened last year, has dared to improve upon it. ShakeDown's flavors include concoctions like Pennsyl-tucky: Pieces of walnut chocolate chip pie swirled into bourbon ice cream. That's the base for the banana split pictured above, and on top hot fudge, strawberry sauce, whipped cream, peanuts, and brandied cherries. The banana? That's bruléed, obviously. — Caleb Pershan
835 Geary Boulevard between Larkin and Hyde Streets 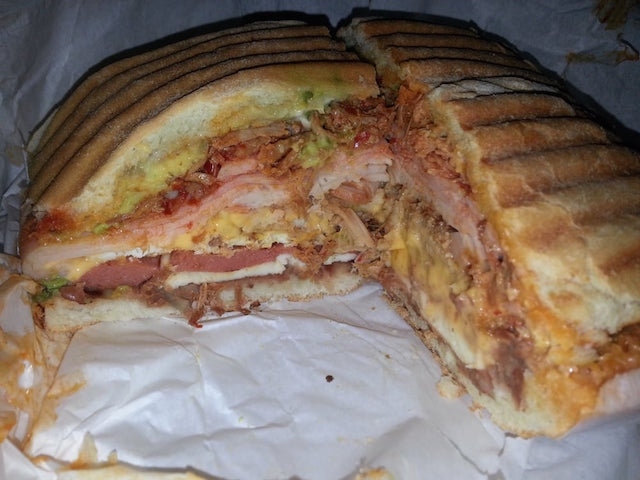 Mega Cubana At La Torta Gorda
When you want a greasy sandwich, but can't exactly decide between your various meats, the Mega Cubana has you covered. Milanesa, sausage, pierna, ham, chorizo, eggs, turkey, queso fresco, and American cheese team up in what can only be described as the torta to end all tortas. And god help you if you get the Regular instead of the Junior, as contrary to what the name might suggest, the latter is still a lot to handle and the former is a serious commitment. So if you ever feel like going into a week-long food coma, La Torta Gorda has you covered. — Jack Morse
2833 24th Street, Between York and Bryant Streets 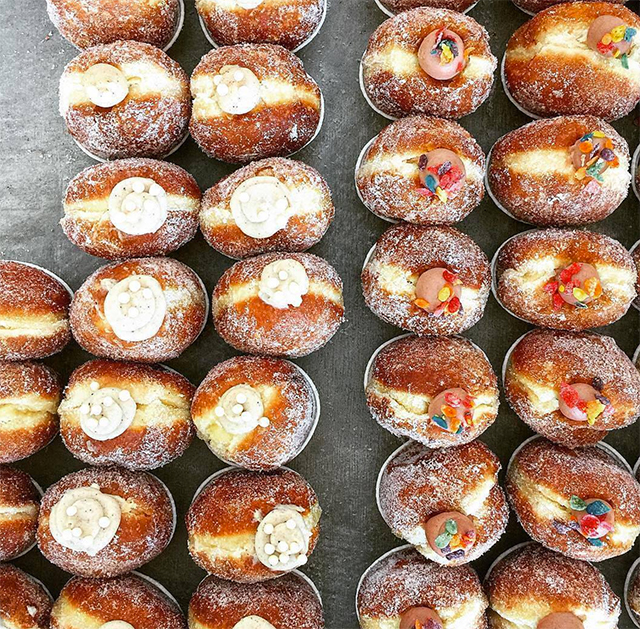 Everything at Mr. Holmes Bakehouse
What's that you say? Stop knocking doughnuts? Sure, doughnuts aren't that healthy, but when you start talking about cream-filled cruffins the size of a small puppy or whatever the fuck this thing is, you are taking us to a whole new level of Instagrammable indulgence that is so popular precisely because it is over the top. Nobody's counting calories here, clear, and there's still a line every day.  Jay Barmann
1042 Lark Street 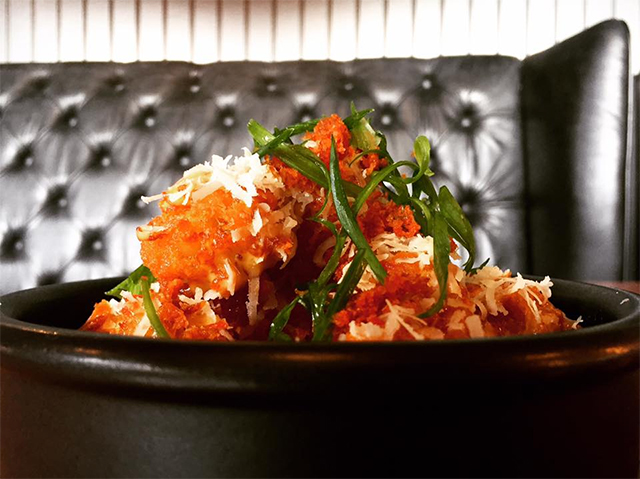 'Toga tots at The Saratoga
Tater tots are everywhere on menus these days, but the version at the brand new Tenderloin tavern The Saratoga, part of their menu of "upscale comfort food," are especially envelope-pushing, if delicious. These darkly fried cubes of potato are dusted with chorizo bits and cheddar, and after about two of them you're going to be like "please get these away from me because I can feel my heart slowing down."  Jay Barmann
1008 Larkin Street at Post 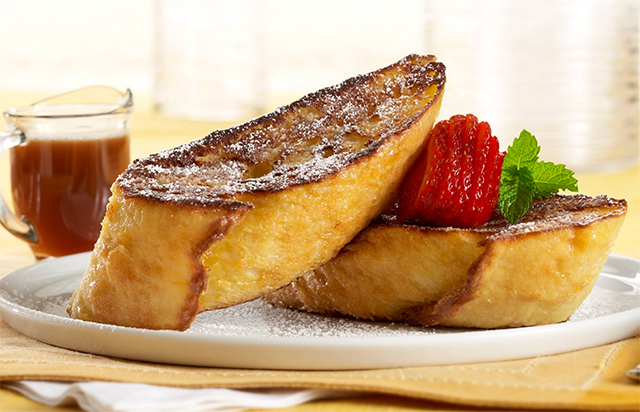 Photo courtesy of The Cheesecake Factory

The bruléed French toast at the Cheesecake Factory
Sitting atop Macy's in Union Square is an evil empire that has tricked millions of innocent Americans into eating things that are really, really bad for them, all in the guise of being a family-friendly hangout with a specialty in cheesecake. A 2014 report from the Center of Science in the Public Interest found that the Cheesecake Factory won out with several of the nation's most caloric chain-restaurant dishes, including but not limited to a 2,400-calorie pasta, and a 1,500-calorie slice of cheesecake. But the big winner was their custard-soaked bruléed French toast, which clocked in at 2,780 calories, with 93 grams of saturated fat, 2,230 milligrams of sodium, and 24 teaspoons of sugar  an indulgence great enough that it would take seven hours of lap swimming to burn it off. Reports like that prompted the chain to launch its "Skinnylicious" menu a few years ago, but who really orders off of that?  Jay Barmann
251 Geary Street, 8th Floor 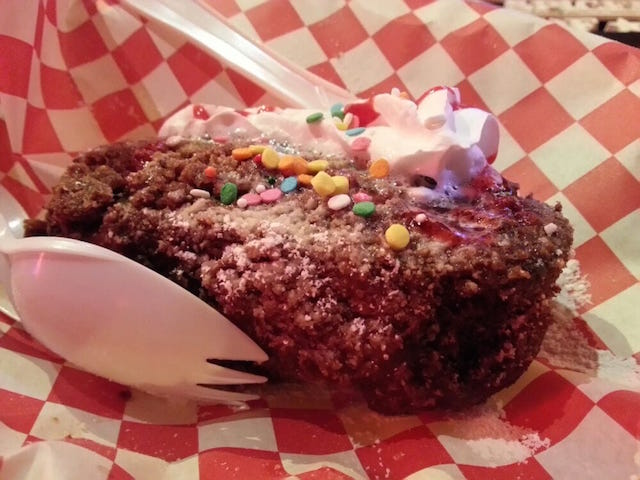 Deep-Fried Twinkie At Butter
A Twinkie is already an unhealthy indulgence, but when you deep-fry that bad boy and roll it in crushed Graham crackers a clogged artery is practically guaranteed. Butter, a "white-trash" themed dive bar, serves up the dish in question alongside jello shots — meaning you can make questionable drinking and eating decisions at the same time. At $5 the fat and sugar missile may seem a little steep, but hey, nothing this decadent should be too cheap lest it encourage over consumption. We're sure you agree. — Jack Morse
354 11th Street, Between Folsom and Harrison Streets 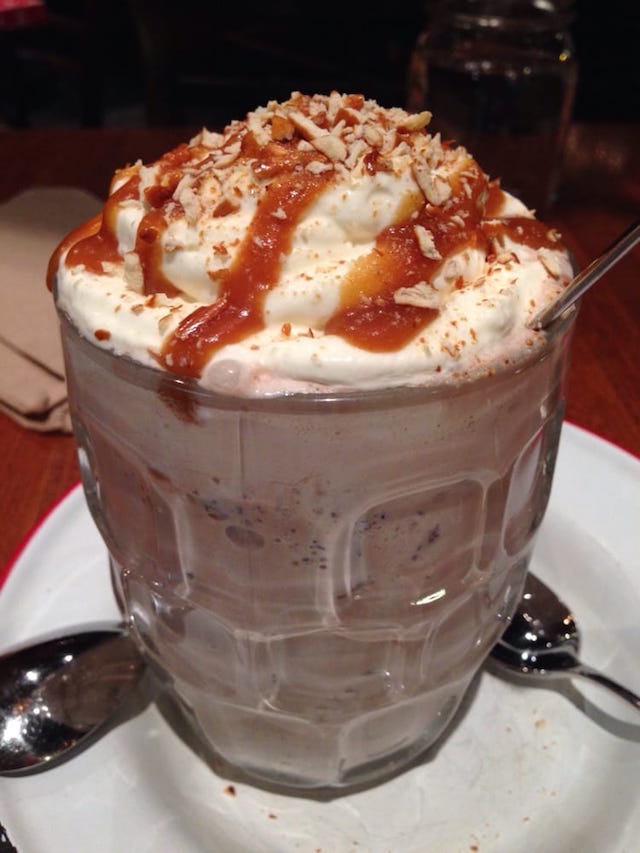 Pie Shake at Chile Pies & Ice Cream
When Green Chile Kitchen moved out of its original location in 2010 to relocate to a larger space up the block, in went Chile Pies & Ice Cream, and out went any diet plans anyone in the NoPa vicinity may have had. You can enjoy seasonal pies from head pastry chef Wesley Monahan a la mode, but why be traditional? Blend that all together in the form of a pie shake: Choose a slice of pie and they'll put it through a blender with ice cream and milk. What could possibly go wrong? — Caleb Pershan
601 Baker Street between McAllister and Fulton Streets 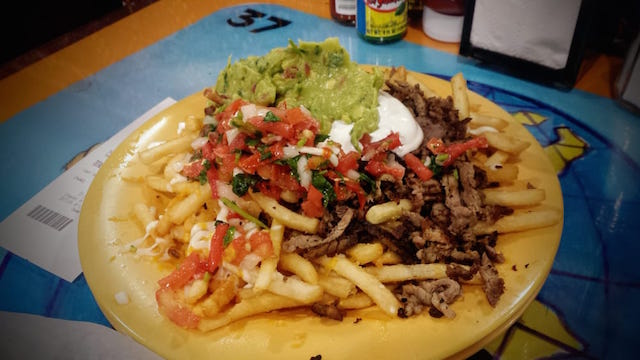 Carne Asada Fries at Taqueria Los Coyotes
What's cool about Taqueria Los Coyotes, other than the fact that it's open on Fridays and Saturday nights until 3:30 a.m., is that their fryer is always in use: The California burrito, a SoCal popularized treat with fries inside, is a Los Coyotes classic, but a more sharable version (if you're into sharing, that is) comes in the form of their carne asada fries. With guacamole, melted cheese, and a healthy serving of beef on top of a big plate of freshly fried potatoes, this is one of the best late night mistakes you could make. — Caleb Pershan
3036 16th Street between Mission and Valencia Streets 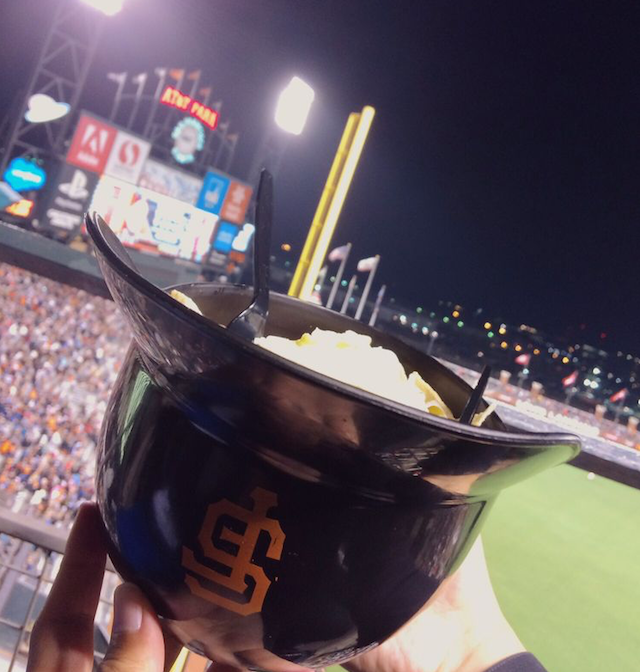 Nacho Helmet At AT&T Park
Who doesn't like eating their sloppy food out of athletic gear? No one, that's who! As such, it's no surprise that the helmet nachos at AT&T Park — yes, served out of a replica Giants batting helmet — are a huge hit. At $18.50 they're a bit pricey, but it's ballpark prices and they feed two (unless you really want to hunker down and munch) so they're definitely worth it. Expect loads of guacamole, sour cream, salty chips, and no shame. It's incredibly unhealthy, but hey, so are those garlic fries and the six beers you managed to put back so no judgement. — Jack Morse
24 Willie Mays Plaza, At 3rd and King Street

A new round of renderings for the proposed Mission Rock development is set to be presented this coming Monday to the San Francisco Bay Conservation and Development Commission, and the updated images provide

The Winterland Ballroom in San Francisco was the first place that the Band played as "the Band," guitarist Robbie Robertson tells director Martin Scorsese in an interview from his magnificent concert documentary The