That little Hayes Valley park at Octavia Boulevard has welcomed a few Burning Man art and sculpture pieces over the years, probably none more iconic than David Best’s Temple structures that held court there in 2005 and 2015. But the iconography is back in a big way at Patricia’s Green with the just-completed installation of Trillian and Dodi, two dazzling new sculptures from Bay Area art collective HYBOCOZO. After we received word last month that Rec and Parks was considering the installation of the sculptures in a partnership with the SF Arts Commission, we can now confirm that these babies are up and fully functional in their multicolor LED glory.

“They went up in one day,” the pieces’ co-creator Serge Beaulieu told SFist, noting that additional wiring and lighting for nighttime magic was required but is now completed. “We need to add proper signage over the next month.” 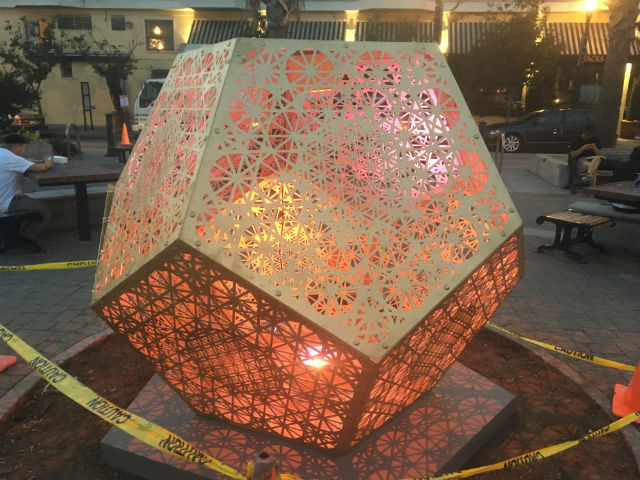 The yellow caution tape and orange cones seen in the image above are now removed. The two sculptures will remain at Patricia’s Green for an entire calendar year, bringing a modicum of joy to a city that really needs it right now. 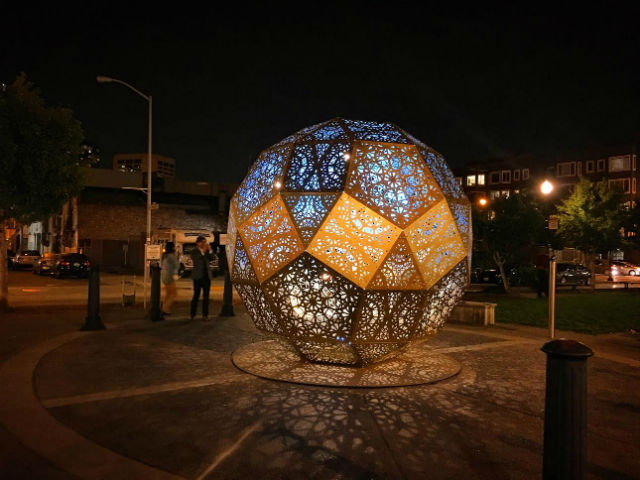 If any of you sci-fi and fantasy dorks just perked up thinking the name “Trillian” is a reference to the Hitchhiker’s Guide to the Galaxy series, you are correct. Some of HYBOCOZO’s other works have Hitchhiker's Guide-inspired names like Heart of Gold and Deep Thought. Indeed, deep thought can be inspired by these the sculptures’ laser-cut tiles inspired by mathematical physicist Sir Roger Penrose. 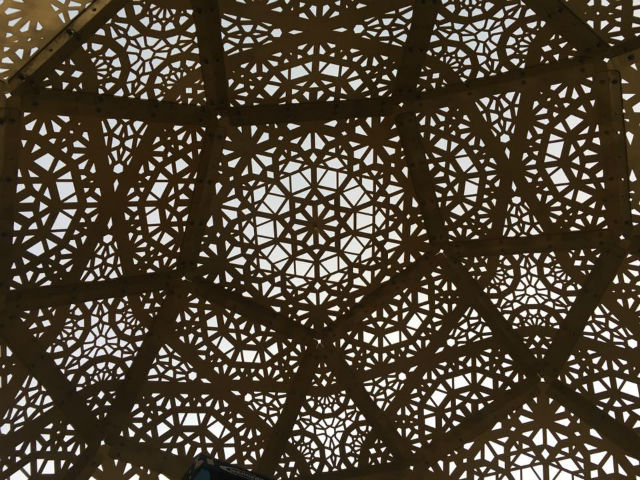 “The Penrose Tiling pattern carries a deep significance for our artwork,” co-creator Yelena Filipchuk said in a release. “It represents the eternal and relentless search for a connecting thread in the universe. It is this quest which ties all of humanity together.”

While the new piece Trillian is 10 feet tall and weighs 1,000 pounds, the smaller work Dodi is 6 feet high and weighs 600 pounds. “[The name] ‘Dodi’ is derived from the geometry, a 12-sided dodecahedron,” Beaulieu said.

The installation is part of San Francisco’s now-annual Illuminate the Arts Festival of Light, a collection of 35 separate permanent and temporary lighted art installations that will grace the city from Thanksgiving through New Year’s Day.

Facebook CEO Mark Zuckerberg frequently talks about making the world "more open and connected," but what if his service, used by roughly 170 million Americans every day, is having the exact opposite effect?

Wind down after a long day with these premium smoking accessories. Nothing’s better than the chance to reset after the daily grind, right? Whether you’re a puffer or a passer, we’