We're all going to need to drink a lot to get through this winter. And then some. And what better way to start your weekend, or any morning really, than with a stiff Bloody Mary. People get a little crazy with garnishes sometimes, but Bloody lovers love them because they're almost like a meal, vegetables (and sometimes bacon) and all. Below, our picks for the finest examples in town.

500 Club
Can we all just agree that celery is bullshit? It's flavorless, chewy, way too stringy, and it ruins any good Bloody Mary by taking up space that could be used for something better — think more booze, limes, tomato juice, basically anything really. The 500 Club, a wonderful Mission dive bar, figured this out a long time ago. Their bloodies sub asparagus for the aforementioned stalk, and are also garnished with lemon, lime, pickled green beans, and some wonderful salt. Depending on who's making your drink, it may also get a splash of Guinness to thicken it out a bit and cut down on the acidity. Yum. Consider having one for breakfast today and every day for the next four years. — Jack Morse
500 Guerrero Street at Mission 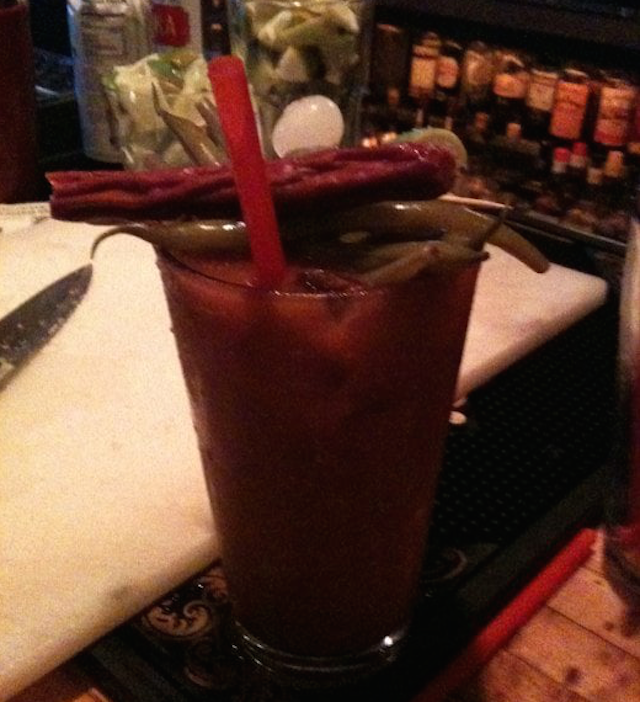 Bender’s Bar and Grill
If made correctly, a Bloody Mary eases a hangover while simultaneously negating the need for you to order a meal. "Save room down there for more booze," the drink seems to coo to its devotees. "My many garnishes are all you need..." And indeed, for the meat-inclined, the Bloody Mary at Benders Bar and Grill has you covered. In addition to the wonderful pickled green beans and various dressings, the bartenders plop a stick of beef jerky in the drink. And while true, this does mean it's off limits for vegetarians, so are all Bloody Mary's (you know Worcestershire sauce is made with fish, right?). So order up, munch on that meat, and put back your morning drink. You've earned it. — Jack Morse
806 South Van Ness Avenue at 19th Street 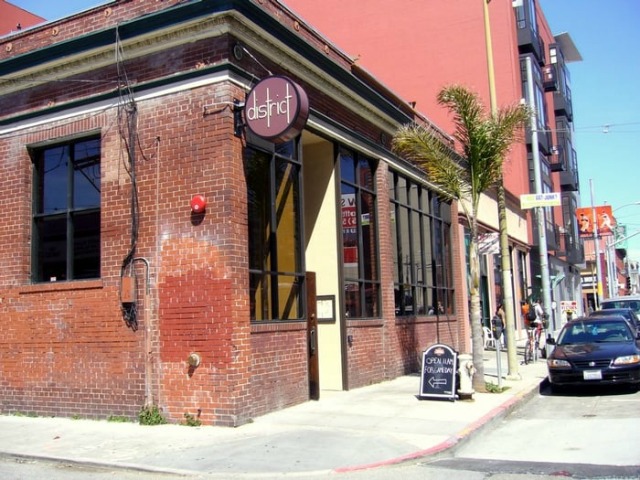 District
District has two outposts: in San Francisco near AT&T Park, and in old Oakland. I can speak only to the SF location of the wine bar (that unlike most, also boasts hard booze), which serves an all-you-can-eat Sunday brunch buffet for $22. For an additional ten bucks, you can also get a District Bloody Mary, which comes with a spiced rim (hush up, you) and house-pickled veggies. — Eve Batey
216 Townsend Street at Third Street 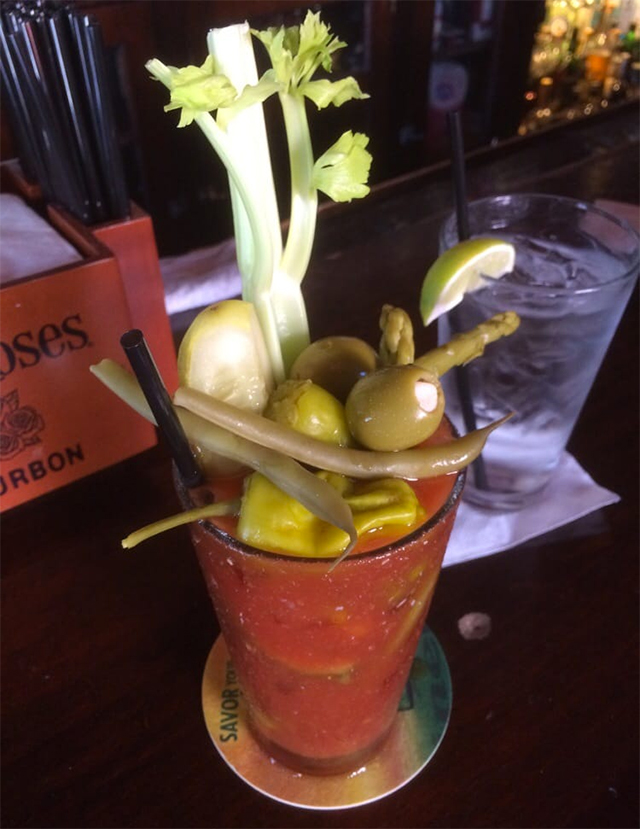 Elixir
In the Mission, Elixir has long been a destination for hangover help via their Vodka Salad Bar, available every Sunday afternoon until 6 p.m. It's a make-your-own Bloody Mary situation with a selection of hot sauces, pickled garnishes, dry seasonings (Old Bay and celery salt, anyone?), and house-made mix.
3200 16th Street (at Guerrero) 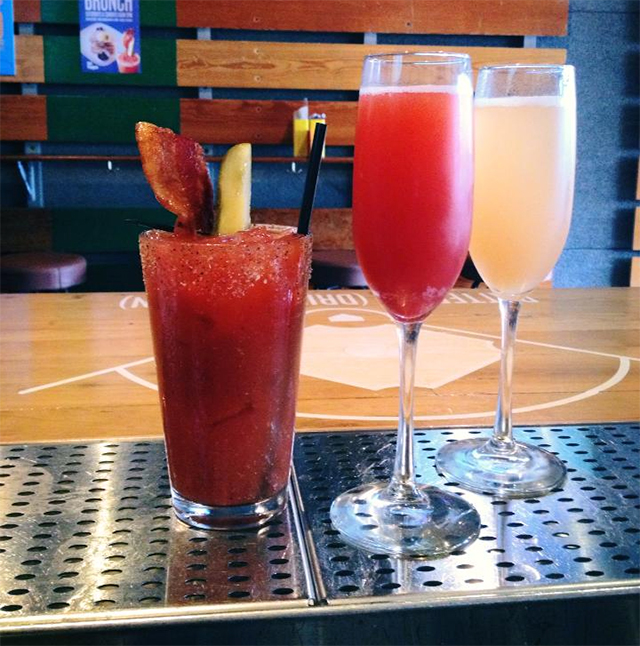 Hi Tops
The Castro's hangout for gay masc bros, sports fans, and others, features a Bloody with bacon-infused vodka, and a bacon garnish, which goes quite nicely with a tray of their Killer Nachos, should you be that hungover any given Sunday.  Jay Barmann
2247 Market between Noe and Sanchez 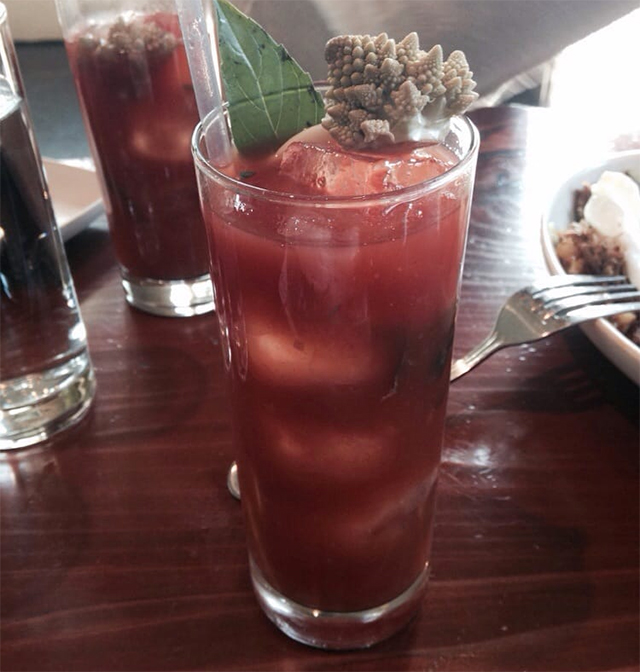 Maven
A classy, delicious, and unique twist on the form comes in the Maven Bloody, served only at brunch, which includes basil, balsamic vinegar, Tabasco, horseradish, and house-made pickles. The burger, also, is very good (and has Angostura bitters in it).  Jay Barmann
598 Haight (at Steiner) 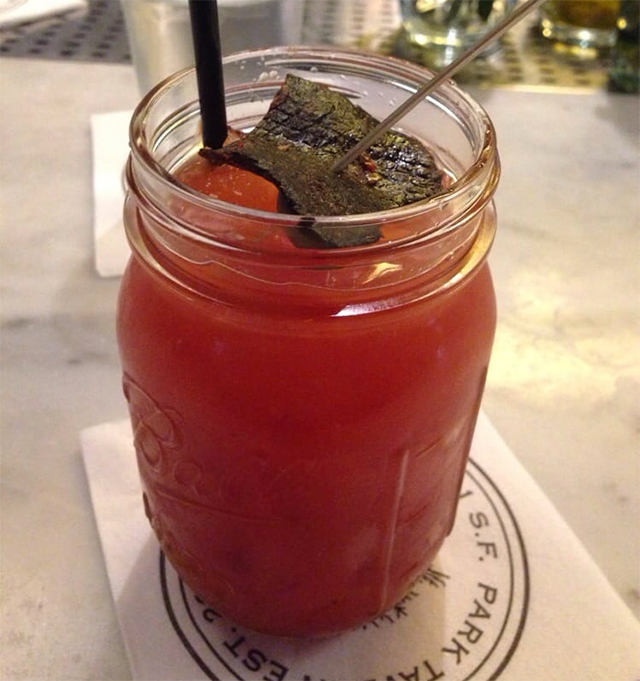 Park Tavern
Up in North Beach, Park Tavern has become well known for their house Bloody Mary, made with their own special mix and Russian Standard vodka. It's simple but delightful, and comes humbly garnished with a pickled green bean and house-made beef jerky (so, like the Hi Tops version, this is decidedly not a vegan-friendly Bloody, but also see the above note about Worcestershire sauce being made with fish).  Jay Barmann
1652 Stockton Street near Union 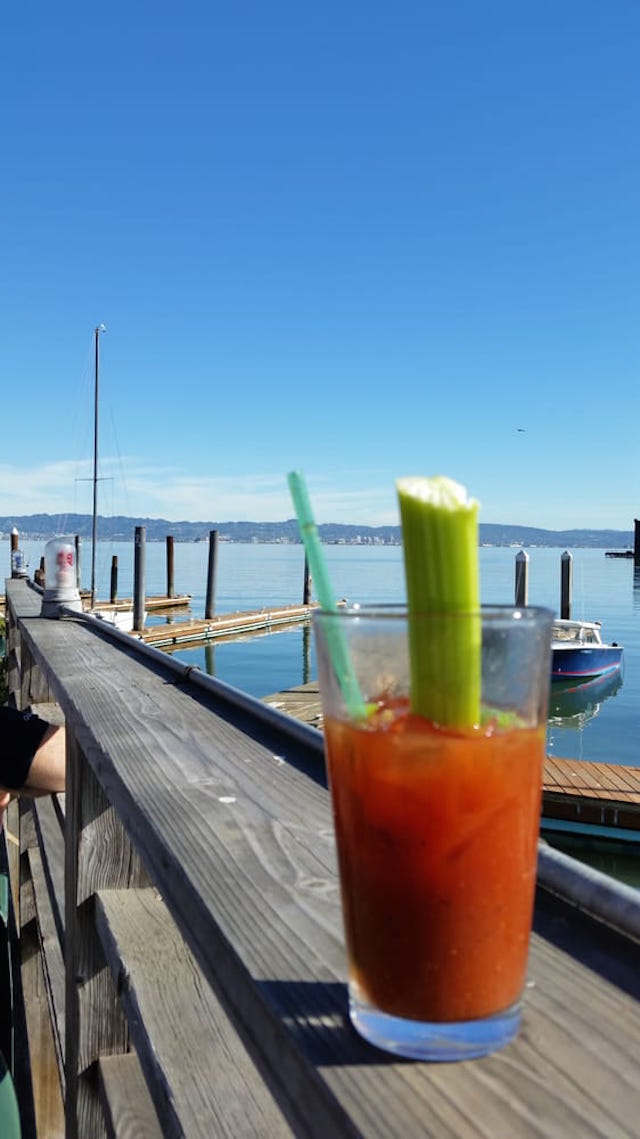 The Ramp
The Ramp used to a be a bait shop, but now they lure you in with their spicy Bloody Mary. Yep, sometimes you just want to get plastered on a patio, and that's when the Ramp is there for you. Located in the Dogpatch, The Ramp's view beats the food — crab Benedict, fish and chips — but everything works together to show you a good time. — Caleb Pershan
855 Terry Francois Street between Mariposa and Illinois Streets 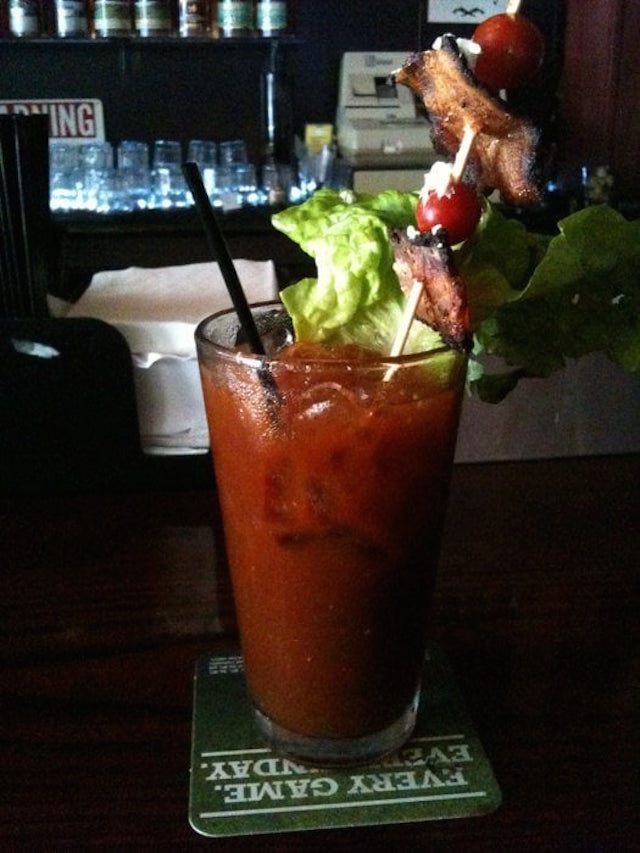 Thieves Tavern
Owner Paul Bavaro has a trio of thieves — Whiskey Thieves, Thieves Tavern, and Dirty Thieves, now Blind Cat as the name was changed, according to lore, on a bet — but of them all, Thieves Tavern is my fave. Part of the draw for many is the BLT Bloody Mary. That's what it sounds like: a garnish skewer of bacon, lettuce, and cherry tomato (with a smear of cream cheese on it). Your money always goes a bit farther in a dive like Thieves, and at $8, their Bloody Mary will do you right. Served on Saturday and Sunday from noon to 5 p.m.. They do an "epic" version, too, but the original is epic as-is. — Caleb Pershan
496 14th Street between Valencia and Guerrero Streets 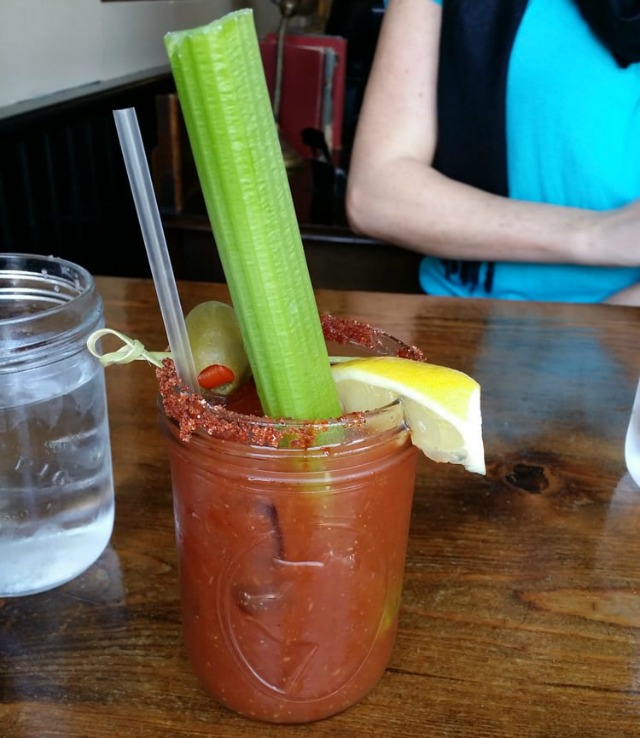 Now that's what I call a spiced rim. Photo of a Tipsy Pig mary: Dori D/Yelp

Tipsy Pig
The Tipsy Pig's garden patio is a great place to enjoy one of their Bloody Marys. Or two, as they offer multiple varieties: The Mary Pig, which they describe as a classic-style Mary, and a Spicy Mary, which includes Crater Lake Pepper Vodka and a "spiced rim" (a phrase that makes me snicker because I am a teenager). Both are offered during their brunch service, but I'll bet if you ask nice you can get one any time you want. — Eve Batey
2231 Chestnut Street between Scott and Pierce Streets 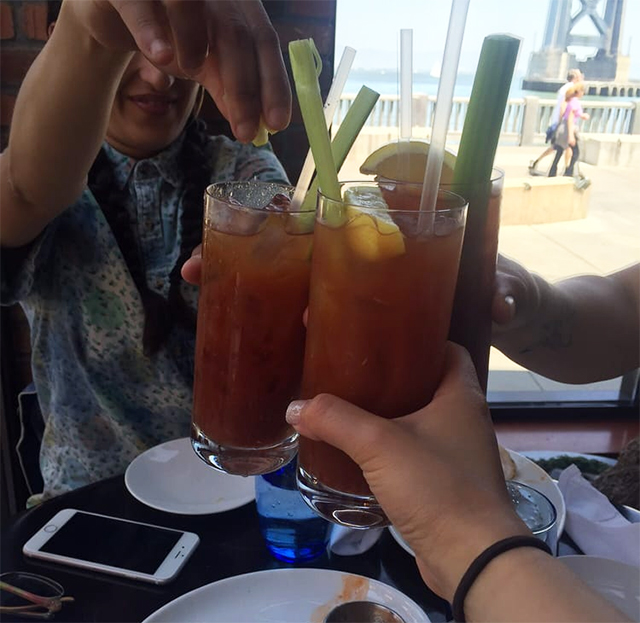 Waterbar
This well touristed Embarcadero seafood spot does a brawny (and prawn-y) version of a Bloody Mary with Ketel One, a house-made spice mix, bacon, and a large Gulf prawn as garnish. It's a perfect appetizer before a brunch of smoked fish croquettes, or you could go for their halibut gravlax “croque madame”.  Jay Barmann
399 Embarcadero near Folsom 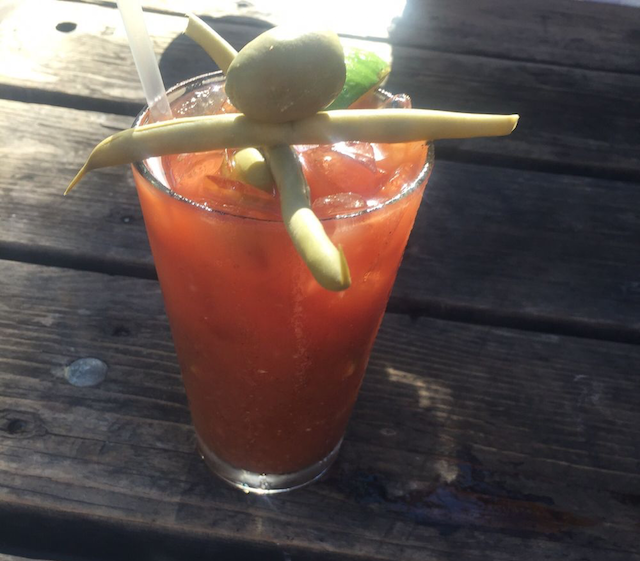 Zeitgeist
For the very few of you who don't already know, Zeitgeist is a big beer garden in the Mission. And while it's changed quite a bit in the last six or so years — no longer is a bad look at a bartender enough to get you tossed out — the wonderful Bloody Marys have remained the same. The pickled garnishes alone are enough of a justification to order a second, but just a word of caution before you order that third round: These things are made strong (you're not sipping vegetable juice). And sometimes that's exactly what you want — no BS, just a powerful breakfast booze drink. In those cases, Zeitgeist has you covered. — Jack Morse
199 Valencia Street at Duboce Avenue 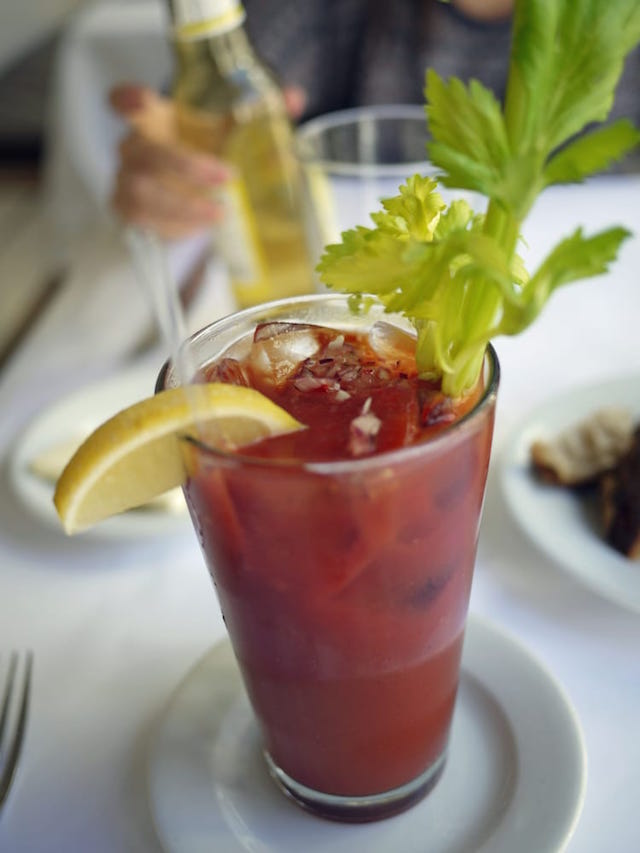 Zuni Café
Judy Rodgers, the Zuni Café chef-partner who passed away in 2013, knew how to fix a Bloody Mary, and her Market Street restaurant carries on that legacy (which you can too, as the Chronicle published the recipe here). The not-so-secret ingredient (also used at Maven): balsamic vinegar. Of course, if you make this at home, you can't enjoy it with Zuni's inspired brunch. —Caleb Pershan
1658 Market Street at Rose Street between Gough Street and Van Ness Avenue

Besides those indefatigable and still-not-dead-inside high school students showing us all up today with their walk-outs and marching, I'm not coming up with a lot of reasons not to just start drinking early.

As Silicon Valley continues to freak out at the national tragedy that is Donald Trump's election, Apple CEO Tim Cook took a moment yesterday to reassure his employees that despite the bigotry and