Interpreting the election of Donald Trump and his running mate Mike Pence as a direct attack on the liberal values and diversity the Bay Area represents, local protestors are likely to make themselves heard tonight at several rallies already picking up viral steam in the form of Facebook events. Plenty of people took to the streets last night, but now, in the light of day, the activist network forged by the Occupy and Black Lives Matter movements appears to be energizing efforts in Oakland and downtown San Francisco. Still others have planned a candlelit vigil for the Castro neighborhood.

"Join us in the streets to demonstrate mass opposition to Trump and his agenda!" ask organizers of "Protest Trump in Oakland!," who are groups including Bay Area for the 99 Percent, a Bernie Sanders-supporting group. "Build a movement to fight racism, sexism, homophobia, and Islamophobia!" On the Facebook event, there were 3.2 thousand people (and perhaps several of your friends, if you're like me) who had indicated they would attend as of 1 p.m. today. That's scheduled for 5 p.m. at Frank Ogawa Plaza, referred to here as Oscar Grant plaza to commemorate his killing in 2009.

Another protest at 5 p.m. is also capturing attention, this one organized by the ANSWER Coalition (or Act now to Stop War and End Racism), the group behind many Bay Area Black Lives Matter marches. That's on Facebook as "Emergency Protest: Trump Says Go Back, We Say Fight Back!" The meeting place is indicated as the Powell and Market cable car turnaround. 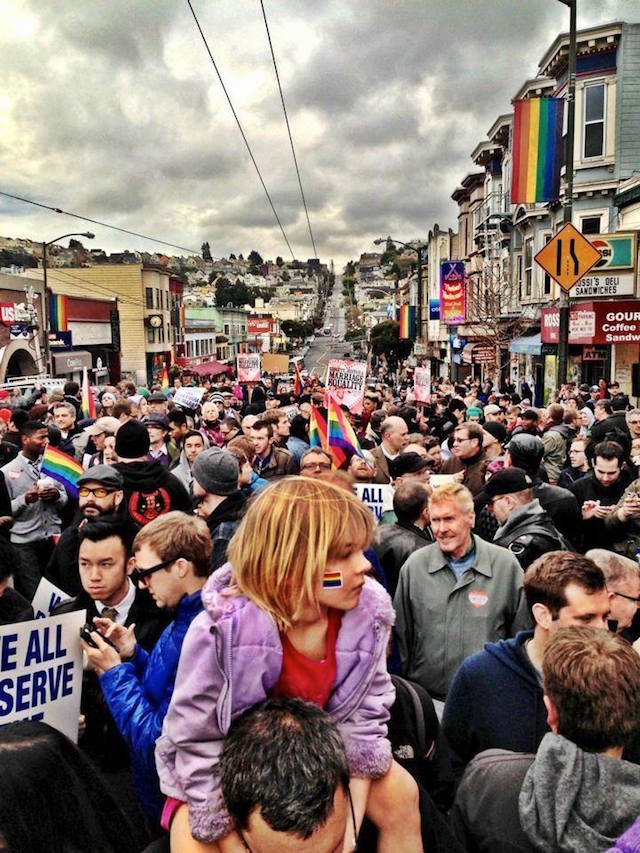 A third event is likelier to strike a somber tone: Activists in the Castro are planning a vigil to be held at Harvey Milk Plaza. That's on Facebook for 5:30 p.m. — yes, it will be appropriately dark by then. Individual organizers have it as "Election Response!- Candlelight Gathering/Rally at Castro/Market." It's likely to be a space, in particular, for queer people of all stripes, many of whom are devastated by the reversal of progress the election can be seen to represent for the LGBT community. And, as often happens with such events, it could lead to a march down Market Street as well.

There's likely to be overlap with other efforts in all these events, which the Oakland protest acknowledges. "If someone else has organized a similar protest," they write, "let us know so we can join forces." An organizer for the event in the Castro writes in agreement that "there will be many parallel events. The one in the Castro may be smaller, but the plan is to also be reflecting." For the many who treasure the Bay Area for its strength and diversity, there sure is a lot to reflect on, and a lot to do.

The reactions have been swift across the Bay Area to the fact that we now have a President-Elect named Trump. The worst case happened. We awake in a nightmare. The Examiner collected a

While you and I are busy maintaining our thousand-yard stares off toward the orange-tinted collective doom looming on the horizon, big names in the world of Silicon Valley tech have commenced full on