If there's one thing we know from the last three World Series wins by the Giants, San Franciscans like to break things and light stuff on fire even when they're happy. (And this seems to be something that happens other places too, including Chicago, though the vandalism there after Wednesday night's dramatic Cubs win didn't amount to much.) Protesters also break stuff in anger here, and we are a city steeped in radical, sometimes destructive protest tradition. So, if Hillary Clinton clinches the presidency on Tuesday, after 18 months of daily hell and torture on both the left and the right, will there be mass celebration in the streets and plentiful rolls of toilet paper tossed over Muni wires? Or will there be subsequent, cathartic burning of discarded mattresses and refuse in huge bonfires on Mission Street and riots all over town like there were back in 2010 and 2012? And if Donald Trump somehow becomes our next President, will San Francisco just spontaneously self-immolate and cease to exist in a collective act of protest the likes of which the world has never seen?

These are actually reasonable questions.

If Hillary wins, which by most reasonable polls we should be able to be confident she will  even if goddamn Nate Silver continues to give me daily agita like this and this for no reason besides website traffic  I can promise you the Castro will be elated, and there will be dancing in the streets. The elation for Obama's victory in 2008 was widely felt in many neighborhoods, but I think the relief after this year, combined with Hillary's broad support in the LGBT community is going to mean an extra-heightened party this year in the vicinity of 18th and Castro.

Will the Mission get set on fire, Gigantes-fan style? Probably not. Sure people will be happy and relieved, and some bars will feature some happy toasting drunks, and the Latino community really hates Trump, so there's that. But as has been written about a trillion times in the last several months, love for Hillary among Democrats isn't quite so passionate as it was for Barack. Call it mysogyny, call it her lack of charisma, call it her email albatross. 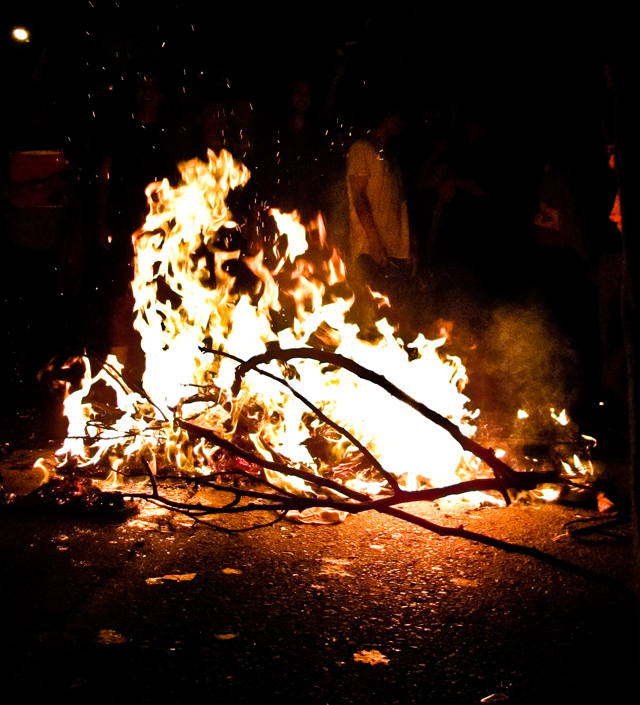 Look. We lived through eight years of Dubya, and older Lefties and SF gay men are going to talk about the hell of the Reagan era too. This is way different. The depression that is probably fresh in many peoples' memories about November 2004 is going to be nothing compared to what would follow a Trump victory, and a few literal dumpster fires and bonfires in the Mission and vandalized Muni busses are going to be the least of our concerns. In fact, people could be so shell-shocked and nauseated by such an outcome that they won't even have the energy to protest or light anything on fire at all.

There will, of course, still be work to be done. For a while. For as long we still have a country.

As our native New Yorker compadre and Gothamist honcho Jake Dobkin writes today, "I think our obligation in the event of a Trump victory would be to speak out for as long as we could before he crushed what remains of a free press. After that, those of us who were still alive and not imprisoned in the gulag could find one another, and try to organize against whatever Empire he creates on the burned ashes of the Republic."

People with means and dual citizenships and such will seriously consider moves abroad, although leaving your country for dead is hardly a good or morally admirable option.

Anyway, look. A President (*gag* *barf*) Trump would just ignore us over here in San Francisco kind of how G.W. did. The Democrats in Congress could probably figure out a way to begin impeachment proceedings pretty soon much the way the Republicans are probably going to try to if Hillary wins  though a President Pence could be arguably worse on a number of levels. And say goodbye to the Supreme Court and civil liberties and legal abortion.

I'm not going to tell you how to feel or advocate vandalism in the event that Tuesday all goes to shit. I can barely even talk about it, and as Dobkin says, "At this point, if you don't feel sick to your stomach, you haven't been listening."

But get out there, cast your votes, and do what you can to encourage your swing state friends and relatives not to be deeply, unfathomably stupid about this. Trump is not Brexit, and neither is/was a joke.

I thought this was going to be fun to write, but I was wrong, and I now need a Xanax and a nap.

A rare ray of sunshine breaks through the election haze today with the news that San Francisco could soon have its very own puppy cafe. Yes, you read that correctly: A puppy cafe.

Following up on a National Bureau of Economic Research report released last month which found that Uber and Lyft drivers in Seattle and Boston discriminated against passengers with African American-sounding names, Senator Al

—
Will San Francisco Burn On Tuesday No Matter Who's President?
Share this