While this production makes great efforts to raise support and awareness for Hurricane Matthew relief efforts, it’s not a play about natural disasters. The Last Tiger In Haiti instead explores the human disaster of child slavery in Haiti, using the vehicle of the “gather ‘round the fire” storytelling tradition to examine the everyday horrors of human trafficking in the Caribbean. The first act takes place in a strikingly realistic set of a Haitian shanty shack, where a gang of indentured foster kids unwind for a night of swapping stories with a stolen bottle of rum. The second act reunites these poor kids years later in an entirely different context. Both acts wallop you pretty good with suspense, blindsiding plot twists, and some sick but amusing gallows humor. 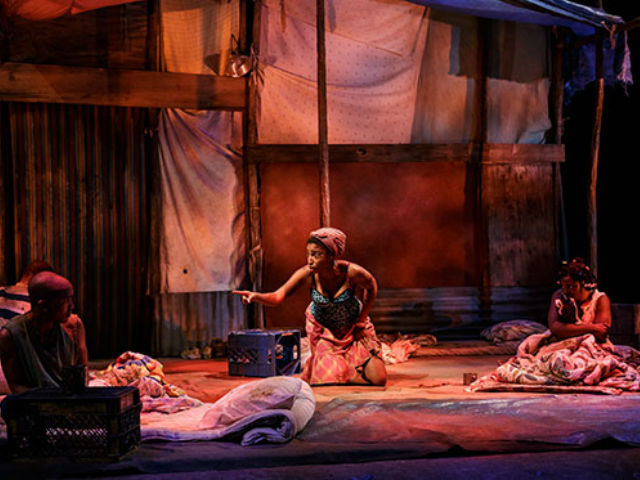 It is something of a stretch to see these fully-grown adult actors as teenagers, though Brittany Bellizeare pulls off a remarkable age transformation in the lead role of Rose. Each performer is a total standout — Andy Lucien is completely credible as the elder kid who takes on a paternal role, and Jasmine St. Claire delivers a gospel song called “The Orange Tree” that serves as the most memorable of this play’s several spine-tingling moments. The Haitian dialects are entirely convincing, and the first act really does sweep you away to a place of abject poverty.

But The Last Tiger In Haiti is not a preachy social justice play, it’s a suspense thriller that just happens to be about young human trafficking victims and how they cope. The play’s various machinations can seem rambling at times, but do eventually pay off with bombshell revelations. Both the first and second acts have major twists, though the first act’s reveal hits far more powerfully. The second act’s reveal lacks the same clarity, may require some mingling with the other patrons after the show to fully comprehend, and could kind of use a rewrite.

Still, it is admirable that The Last Tiger In Haiti takes on such difficult subject matter and brings attention to brutal, real topics that don’t get enough attention in our cultural conversation. Even more admirably, the play is raising thousands of dollars in donations for the hurricane relief efforts of Restavek Freedom and the Lambi Fund of Haiti. The Last Tiger In Haiti doesn’t just introduce American audiences to the tragic dirty little secrets of contemporary Haiti, it has a philanthropic component that tries to solve some of these problems.

'The Last Tiger In Haiti' plays through November 27 at Berkeley Rep. Tickets here

The famed Mavericks surf competition down near Half Moon Bay, which held its tenth event in February since being founded in 1999, will be welcoming female competitors for the first time when and

On Sunday, October 23, from 11 a.m. to 3 p.m., a group of naked people covered in body paint gathered at the Ferry Building and paraded to Fisherman's Wharf, to scare