On Sunday, October 23, from 11 a.m. to 3 p.m., a group of naked people covered in body paint gathered at the Ferry Building and paraded to Fisherman's Wharf, to scare and delight the tourists. Artists were on hand to paint peoples' bodies, and as the Facebook event explains, the theme is "Inner Beauty."

As Hoodline reports, this is the first time that Bodypainting Day has come to San Francisco after starting in New York in 2009. Artist Andy Golub tells the site that he and his models got kicked out of Times Square for wearing nothing but G-strings, and New York wouldn't formally condone the event until 2013.

74 people sid they were attending on the Facebook page, and Golub promises at least 50 people participating. The models have already been selected, though, so you can't just show up and strip down. [Update: The event has now passed, but you can look for photos from it here.] 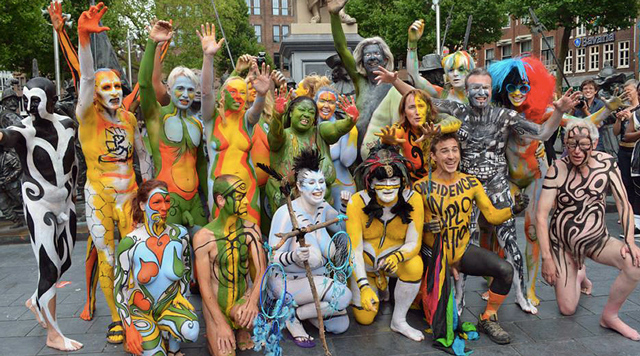 Meanwhile, local nudist activist Gypsy Taub has been waging an internal war against fellow activist and sometime mayoral candidate George Davis, and she and her three children will be staging an emergency protest at Bodypainting Day, which Davis helped organize. "The reason for the protest," Taub tells us in a release, "is that... George Davis... has been widely exposed in the last 6 months for sexually harassing my 15-year-old daughter Inti Gonzalez. She was about 11 years old when the sexual harassment began." Taub claims that Davis has repeatedly tried to spend time alone with her daughter, and allegedly asked her to marry him when she was 11.

Taub and her three children, Inti, Nebo, and Daniel, plan to protest the event in the nude, with a megaphone. (Taub's children have frequently joined their mom in nude protests.)

As Golub tells Hoodline, though, Davis has decided not to attend the event "because he never wanted it to be a distraction from all that Bodypainting Day is about, which is free artistic expression and human connection through art."

While nudity was banned in San Francisco starting in 2013, it is still allowed at permitted events like this one.