The Lower Haight is undergoing a new wave of change that perhaps began a couple years ago, or five years ago, or even ten years ago. But in comparison to similar neighborhoods around it  or even nearby Divisadero which has seen a rapid makeover in its retail and restaurants in the last four years alone  the Lower Haight has held on to much of its character and largely avoided becoming the next Valencia, though that could be changing.

Some are going to argue that the neighborhood has been gentrifying for decades, and in some respects of course that is true  virtually no neighborhood in SF has been spared the scourge/boon, depending on your perspective, except maybe the Excelsior, and Chinatown. Still, as easily accessible neighborhoods in the center of the city go, the Lower Haight has remained a bit of an outlier until very recently, and the closing of a longtime, pre-gentrification meat and fish market this week could be seen as a last nail in the coffin for the neighborhood as it was, making way for a new business that will cater to the neighborhood as it will be in years to come.

First, let me define my terms. Apartment rents in the Lower Haight have risen alongside rents everywhere else in the city, but they seem to be rising a bit faster this year than some nearby neighborhoods  a Zumper guide to median one-bedroom rents for September 2016 puts the Lower Haight just about on par at $3,600/mo with the Castro and the Mission, and higher than Hayes Valley, while just six months previously the Lower Haight median was well below all three.

And while the Tenderloin remains the final inner-city frontier when it comes to lower rental prices and a mix of low, middle, and higher income residents  and a historic cluster of residence hotels housing some of the city's poorest people that sit in close proximity with newly remodeled, market-rate rentals in older buildings  the Lower Haight has been somewhat unique in the last decade in being close to Muni Metro lines, lined with Edwardian and Victorian buildings, and near downtown, yet still not home to a densely upscale retail landscape like the ones found in Hayes Valley, the Mission, the Castro, or SoMa. The Lower Haight, even still, is a neighborhood that feels largely the same as it did 15 years ago, or more, and it hasn't been overwhelmed by new construction because of few available sites.

When RNM opened a decade ago in the space that's now home to Maven, it was the first time that an upscale neighborhood restaurant, with Valencia Street prices, had tried to make a go of it on either end of Haight. It had a successful five-year run before shuttering in 2010  largely because chef-owner Justine Miner got married, took an extended honeymoon, and decided she was done with the restaurant business. Maven took over a couple years later to immediate crowds, which have kept coming ever since.

Joining Maven on the current food and beverage scene is new sushi spot Nara, new ramen spot Iza Ramen  both of which replaced counter-service operations that had slightly lower price points  and new, upscale neighborhood brewpub Black Sands Brewery, which sells $13 shrimp toasts and a $13 burger. Along with The Lodge, which has a similar vibe to the restaurant it replaced, Rickybobby, but with counter service, and Uva Enoteca, the Lower Haight is now a pretty great place to eat night or day.

Other stalwart neighborhood businesses like Mad Dog in the Fog, Nickies, Danny Coyle's, Memphis Minnie's, Toronado, Kate's Kitchen, and Rosamunde draw some steady business from within the neighborhood and elsewhere. And both the Noc Noc (opened in 1986) and Two Jack's Nik's Place (opened in 1977) have seen the neighborhood through multiple decades of change  with Two Jacks just receiving one of city's first statuses as a Legacy Business, hopefully insuring its longevity in its space at 401 Haight.

Retail businesses in the neighborhood, with a few exceptions, have tended not to be of the twee or expensive types found in Hayes Valley or the Mission. Cove specializes in air plants, succulents, jewelry and gifts, and morphed two years ago out of the business called Xapno that was more of a florist. Meanwhile clothing shops like Revolver and Upper Playground and custom t-shirt shop DSF (formerly D-Structure) all cater to a hip crowd with money to spend. And Three Twins Ice Cream, back last year after a hiatus following a 2011 fire, is now joined next door by fancy French cream puff purveyor Choux. 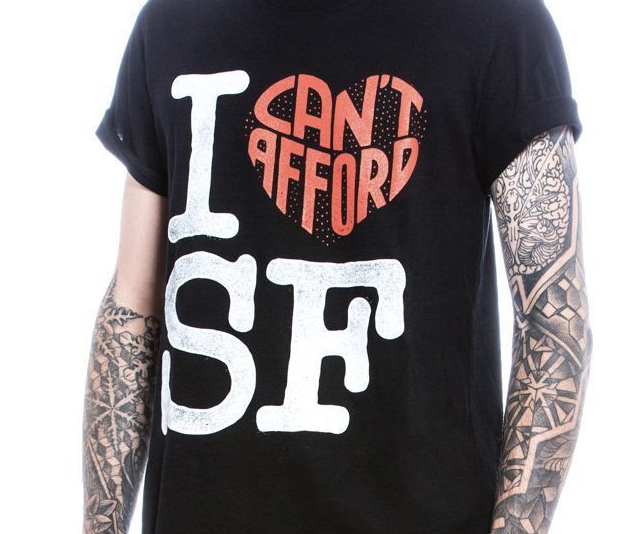 A kerfuffle apparently inspired by gentrification pressure broke out this summer in the neighborhood, focusing on a new upscale marijuana dispensary taking over what had been a longtime neighborhood smoke shop and licensed dispensary. A couple of business owners whose own leases might be feeling gentrification pressure brought the issue to planning to no avail, and SPARC's renovation plans were soon approved.

This week, as Hoodline reported, one of those businesses, Lo-Cost Meat & Fish Market, called it quits after 30 years in business. Co-owner Pierre Pegeron told the site the landlord had hiked the rent, and "We can't afford to stay here anymore." The space, at the prime corner of Fillmore and Haight, has been listed for $25,000 a month, and this follows on the 2014 shuttering of Cuco's next door, in the same building  pushed out at the hands of the same landlord who's seeking the maximize the potential rent in these spaces in what is, clearly, a changed neighborhood from when they moved in.

Peregron was celebrated as a neighborhood hero, as Hoodline had reported in 2011, when he and another man rushed into the building across the street when it caught fire to help alert and evacuate residents there.

In August he told SFist he had two years left on his lease, and expected his rent to go "through the roof" after that, but perhaps he knew the rent hike was coming sooner than that. "It is what it is here in San Francisco," he said. "I had a good run."

An Oakland police officer was arrested and booked into Oakland downtown's Glenn Dyer Jail at 1:00 a.m. this morning, with the department saying the charges are related to prostitution. Interestingly, as

A woman walking near one of San Francisco's most tourist — and crime! — laden intersections was seemingly randomly pepper sprayed Wednesday by an angry attacker. According to the San Francisco Police Department, it was