Brunch is something I especially love to hate, mostly because I can make myself a great egg dish at home without spending extra money or standing in a line, and loving brunch too hard and getting excited about being drunk at noon on a Sunday is something one does when one is 23. That being said, there are always going to be occasions when you need to meet up for a meal with people during weekend brunch hours, and we have a few recommendations for how not to be totally basic about it  because these are all great and well known brunch spots, but how about going somewhere where you won't have to make a reservation or stand around hangry and hungover for 45 minutes before sitting down? Nobody needs that. It's just brunch.  Jay Barmann

20th Century Cafe
Instagrammable down to the floral patterned dishes, this slice of Eastern Europe in Hayes Valley is known for knishes and cake (the bagels are also pretty good!) but it's also a great spot for a weekend brunch. Come on, have some baked eggs Budapest and challah french toast like bubbie used to make. You're skin and bones! —Caleb Pershan
198 Gough between Oak and Lily Streets


Bashful Bull Too
Though the original Bashful Bull closed some years ago, their Taraval outpost has retained the "Too," maybe because the wordplay was just too too too fun to give up? I don't know. Brunch goers seeking a locally sourced heritage cheese omelette will be disappointed with a trip to BBT, but fans of perfectly-cooked hash browns, eggs made to order, a bottomless cup of coffee, and fruit in an adorable arrangement (see above) will be back again and again. Best of all, while BBT is always bustling, it's never so full that you're stuck with a crippling wait — and large parties are welcomed. — Eve Batey
3600 Taraval Street at 46th Avenue 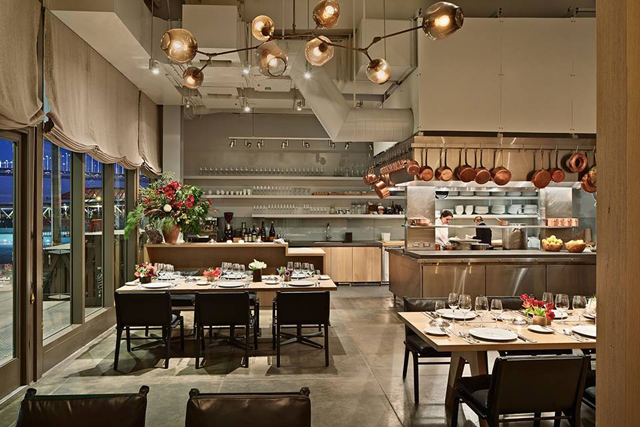 Boulette's Larder
This Ferry Building gem may not be any big secret, but after the Saturday farmers' market crowds disappear, this place can be a haven on a Sunday morning, serving up gorgeous, seasonal brunch fare, albeit for a price. You shouldn't miss their perfect beignets or seasonally changing poached egg dishes, but then you'll have to go back to try the market-inspired Sunday Salad, or one of their delicious scrambles  currently it's white shrimp, chard stem gumbo, and antebellum red grits. Do note that brunch is only served on Sunday, 10 a.m. to 2:30 p.m.  Jay Barmann
Ferry Building 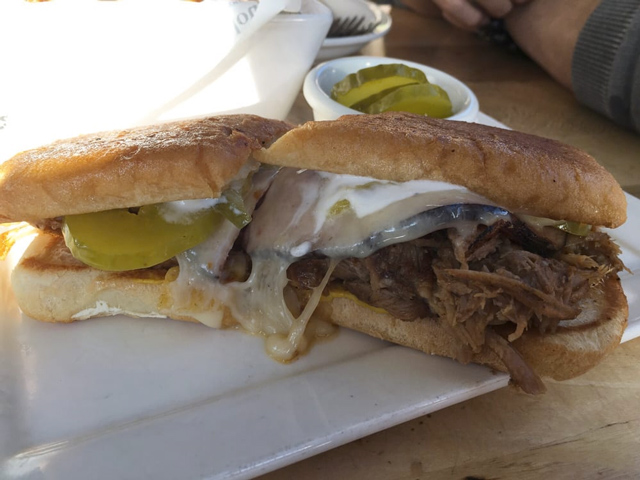 The Castro Republic
Gone are the days of multiple health-department shutdowns, and now under totally new ownership with a new menu, this mostly Mexican Castro spot actually serves solid, delicious, often spicy brunch fare with the added bonuses of outdoor seating and no waits. Or virtually no waits, anyway, because it seems like the neighborhood is starting to catch on that it's safe to go back to this place, now under the management of nearby Tacos Club (and no longer SliderBar). Go for the breakfast enchiladas, or the delicious, toasty Cubano sandwich, and you won't be disappointed. Even the french fries, I have to say, are great.  Jay Barmann
2295 Market Street at 16th

Heartbaker
Blessed with both indoor and front-patio seating, Heartbaker is one of the best places in town to grab brunch with the dog (and other humans, if you must). Chef Sybil Johnson handcrafts the glorious and decadent pastries you see at Heartbaker (do not miss her galettes or the bread pudding), and if you want "real" food, there's always a couple of great egg dishes (the Benedicts are on homemade biscuits, how did I never think of this before?), quiches, and a decent selections of salads for the killjoy in your group. Note: I like Heartbaker so much I almost didn't put it on this list because I don't want to wait in line behind y'all. So, if you see me, please consider allowing me to cut, thanks. — Eve Batey
1408 Clement Street at 15th Street 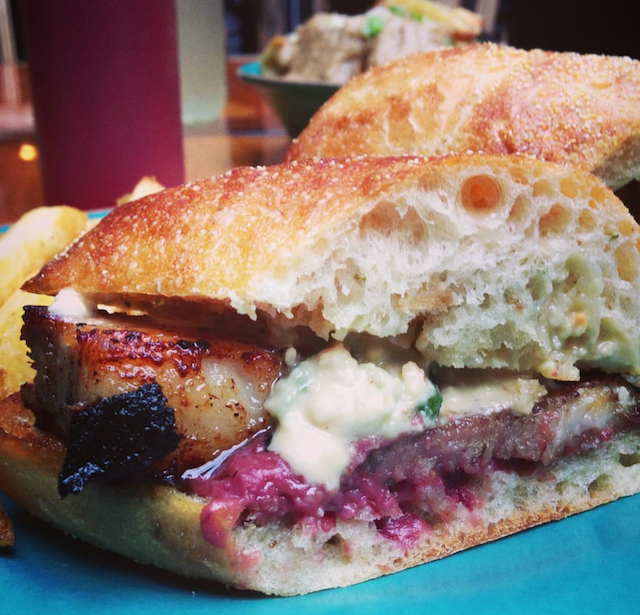 Jamber
When you roll out of bed well into the afternoon, perhaps after a late night, a little hair of the dog brunch is probably the only possible salvation. For those moments, Jamber has you covered. The SoMa spot opens up at 3:30 p.m. on weekends, and serves food that will sop up whatever sin you poured into your belly the night before. The poutine: very good. The P2B, pictured above, combines pork belly, peanut butter, and cranberry-walnut jam for a sweet and salty punch which is sure to heighten the dulled senses. On top of that, the list of beers and wines is huge, meaning there will definitely be something to your liking. Perhaps best of all, Jamber isn't thought of as a brunch spot by most, meaning you can avoid the lines often associated with what is practically San Francisco's official meal. And as an added bonus, happy hour runs 3:30 p.m. to 7:30 p.m., every day. So feel free to order an extra round of fried mozzarella. — Jack Morse
858 Folsom Street, between 4th and 5th 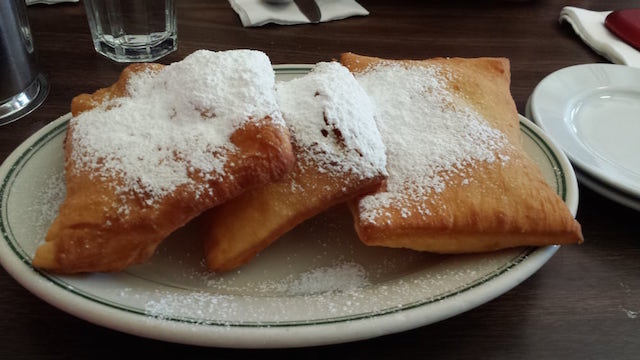 Just For You Cafe
While residents of Potrero and the Dogpatch all rave about this spot, it has slipped under the radar for many brunchers unwilling to trek outside of their own neighborhood. But trek they should, and not just for the signature beignets. In additional to the relaxed neighborhood vibe and (limited) sidewalk seating, the cooks throw New Orleans specialties in along with the classic eggs, pancakes and French toast. Importantly, there's a different menu for weekends and weekdays, so check the calendar before heading over. The Hangtown Fry, which scrambles bacon, onions, and oysters along with three eggs, practically guarantees a cured hangover (if it fails, try the bloody Mary). All in all, Just For You Cafe is a brunch gem. — Jack Morse
732 22nd Street, between 3rd and Tennessee 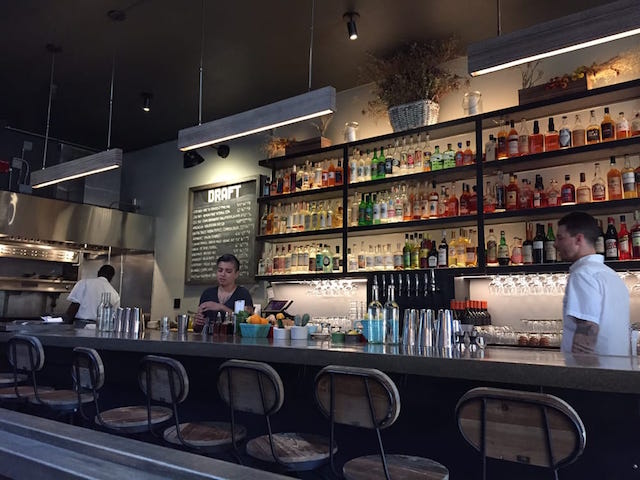 Old Bus Tavern
While Old Bus Tavern has been around for just over a year, it only began serving brunch this past August. So far, the brew pub is doing it just right. Think oatmeal-maple pancakes, pulled pork eggs Benedict, cured salmon, and plenty of Bloody Marias. When you add in outside seating and a full bar, this spot hits the brunch trifecta. Also, in what we're sure has been a life-saver for hungover brunch patrons sitting outside, they'll provide you with a pair of sunglasses if you forget yours at home. Oh, and the Earl Grey and blueberry coffeecake is a must — Jack Morse
3193 Mission Street, at Valencia 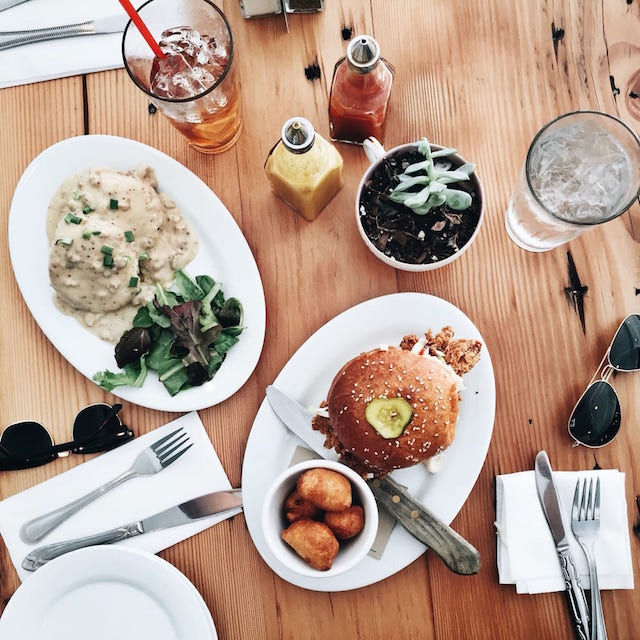 Rusty's Southern
Why wait all morning for a table at Brenda's when you can turn the corner and be seated at Rusty's? Wake up and smell the Lexington-style barbecue, people! Rusty Olsen was the longtime Suppenkuche bar manager before opening his Carolina BBQ spot, and the place shines at Brunch — well lit and new in feel. Brunch faves are pig grits (grits with hickory-smoked chopped pork barbecue) and a (Mary's) chicken biscuit, with thigh meat and a generous helping of sausage gravy. —Caleb Pershan
750 Ellis Street between Polk and Larkin Streets 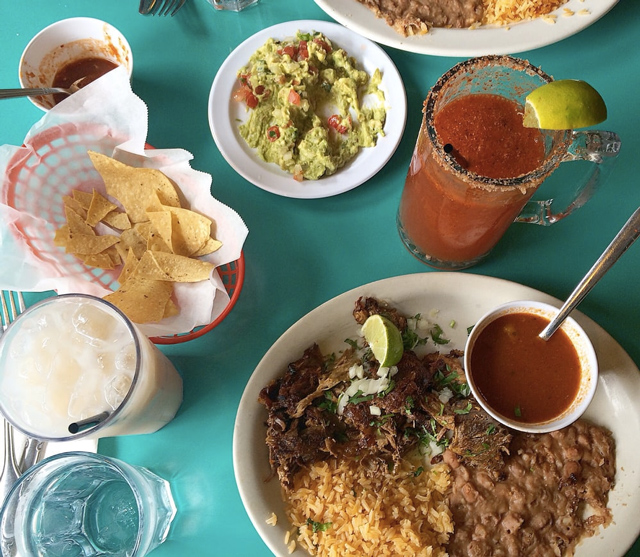 San Jalisco
Possibly the best place in town to find birria, the traditional Jaliscan goat stew (here made with a bit of beef as well, available Friday to Sunday only), San Jalisco has your hangover covered in multiple ways on the weekend including some great chilaquiles (they make four different versions), a selection of more Euro-style omelettes (as well as one filled with guacamole), and the traditional spicy tripe soup known as menudo, available only on weekends and obviously not for the offal-faint of heart. Added bonus: Breakfast is served all day.  Jay Barmann
901 South Van Ness at 20th 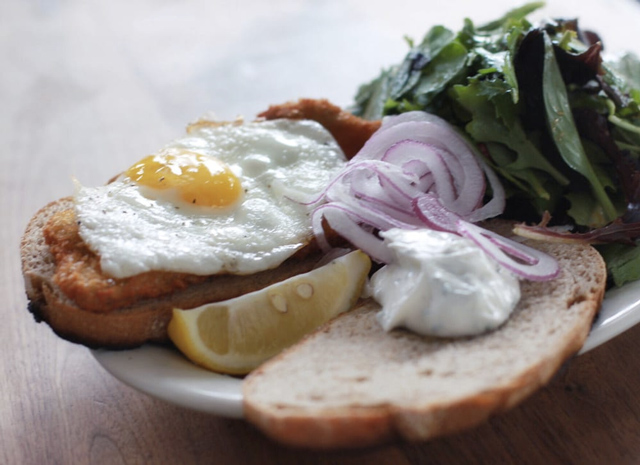 Schmidt's
Fans of traditional German and Eastern European-style hostel breakfasts, featuring cured fish or meats and assorted breads, will be excited to know you have such things here in the Mission at the Walzwerk spinoff Schmidt's. Given the location over at 20th and Folsom, the place tends often not to have a wait for weekend brunch, and in addition to the fishplatte and großes frühstück platter options (the latter comes with cured meats, cheese, German breads, deviled egg, and cucumber salad), there are heartier options like a sausage plate, and a veal schnitzel sandwich with a fried egg on it. Also, of course, there's plenty of great beer.  Jay Barmann
2400 Folsom Street at 20th 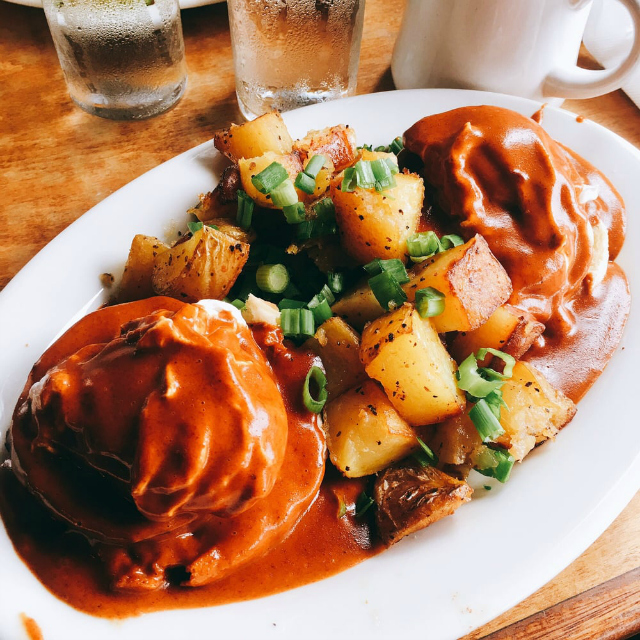 Sea Breeze Cafe
The Sea Breeze is so beneath the radar that they don't even have a website (but you can get a general idea of their offerings via menupages). Since the opposite-of-underrated Outerlands opened across the street in 2009, the Sea Breeze has become the place visitors settle for when confronted with the former's hours-long wait for brunch. In my opinion, it's more than a place to merely settle for, with service that's far warmer and less pretentious than some spots in the area. There's a solid tofu scramble, they have fantastic home fries that you can add cheese to, and most importantly they serve milkshakes all day long. It's brunch, fool, get a milkshake. You only live once. — Eve Batey
3940 Judah Street at 45th Avenue 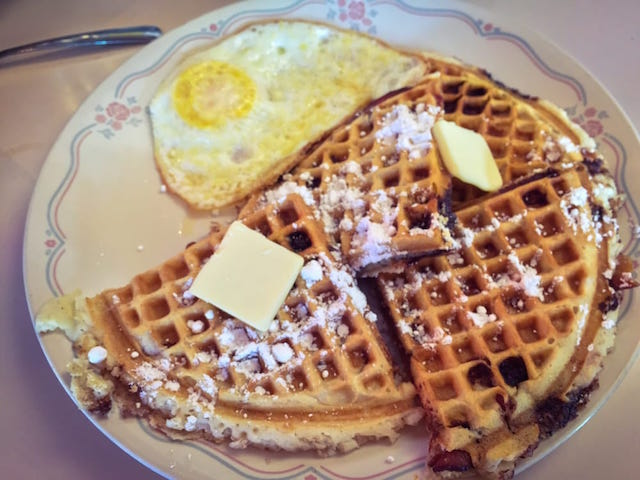 It's Tops
Diner brunch feels so right and It's Tops knows how to do it. Occupying a little corner on Market Street, the spot has been Tops since 1935, though it was a short-order joint since 1906 as Minute Man's. Antique waffle irons are the secret to their stuffed waffles, and pancakes are so soft and fluffy you could take a nap on them. In another universe, or maybe in the '50s, Tops would be packed constantly — it isn't, and that's a plus in my world. —Caleb Pershan
1801 Market Street at Octavia Boulevard 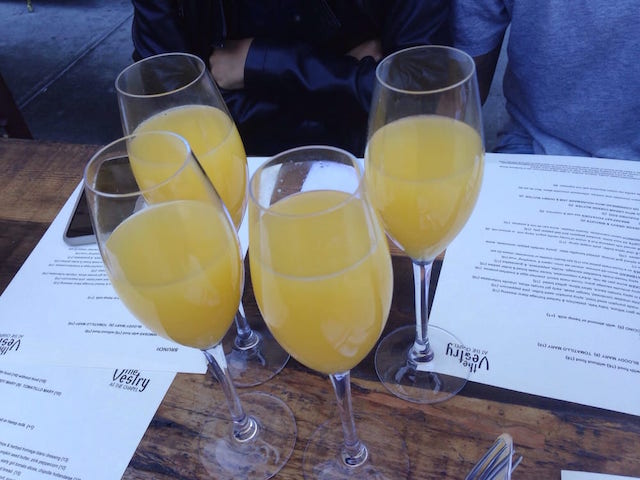 The Vestry
The Vestry's brunch is hiding in plain sight: Sure, it's right there inside the Chapel on Valencia, but because it's cavernously large and has that whole outdoor seating area and maybe it's thought of more as a music venue, The Vestry is usually less than full and ready to accommodate more from the brunching hordes. To ensure your spot you can make online reservations. The house cured lox flatbread, a group dish, is a crowd pleaser, as are bottomless mimosas and tomatillo bloody Marys. —Caleb Pershan
777 Valencia Street between 18th and 19th Streets

The owner of 23-year-old record shop Grooves at Market and Octavia, Ray Anderson, has reportedly passed away. The news was reported by local friend Meggan Scavio via Twitter, and we await confirmation of

—
The 14 Most Underrated Brunches In San Francisco
Share this