[Be warned a couple of images below are NSFW]

An iconic fern bar on Divisadero, which for about 30 years was a neighborhood gay bar before becoming more of a straight-people hang in the last decade, has closed following the death of its longtime owner. The New Fillmore broke the news last week that the greenery-clad Lion Pub at Divis and Sacramento had closed down for good after the lengthy illness and death of bar owner Kelly Ellis.

Like many bars around the city, especially those in business as long as this one, the crowd and character of The Lion Pub morphed and changed over the years. Its heyday as a gay fern bar in the early 1970's, after opening around 1968, gave way to periods of both more preppy, and more leather-y clientele, as Ellis told the Bay Area Reporter back in 1989. "The Lion has gone through a lot of changes since its opening 20 years ago," Ellis said at the time. "We've gone from preppy bar to a dance bar to a hippie bar to leather and back to preppy." And throughout all that, Ellis kept the eclectic, semi-tropical aesthetic in the place, with big leafy plants practically obscuring the entrance, and a couple of carved lions inside, possibly salvaged from an amusement park ride, with saddles for humans to ride them.

The bar had a particular kind of local notoriety in the late 70's and early 80's for its racy illustrated ads, perhaps in its leather period, which the BAR determined were done by late local artist Richard Roesener, who used the pseudonym Dale Hall. Below, two examples, an original version of one of which remains framed on the wall at The Cinch on Polk Street, and is clearly inspired by Tom of Finland. 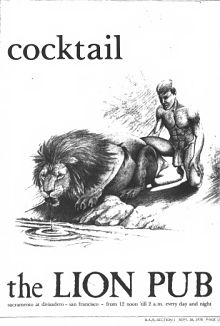 The Lion Pub was not alone in this neighborhood as a gay bar, because the Alamo Square and Upper Fillmore areas long had a gay enclave all their own and a node of homo hangouts anchored by this and the nearby Alta Plaza (2301 Fillmore), which changed hands in 1999 and soon turned into a noodle bar, and now an Indian restaurant. Last year the BAR spoke to a couple of longtime gay residents who frequented both bars, as well as JJ's Piano Bar, which opened in 1987. But it seems as though the character of the bars, as well as the surrounding neighborhoods, began to shift  not surprisingly  along with the height of the AIDS epidemic in 1990.

Ms. Tablehopper remembers going to The Lion Pub to drink, because she and her friends were served despite being underaged, in the early '90s, and the place was still home to the preppy subgenre known as sweater queens. But most of the bars' longtime clientele would not live to see the new millennium, and by around 2005 The Lion Pub was pretty much dominated by young straight people, despite still being gay-owned.

As has been talked about a lot in the last several years, neighborhood gay bars all over the city, outside the Castro and SoMa, have died off for a variety of reasons  both because of real estate pressures, dwindling crowds, and the rise of cellphone apps that negate the need for neighborhood bars as pickup spots.

Hopefully, though, because of the unique character of the Lion, a new owner may arrive and preserve much of what's there.

Related: The Best Gay Bars In San Francisco For Every Occasion

Although the store wouldn't open until 10 a.m., holiday shoppers began to form a line for Britex Fabrics at 9 a.m. on Monday, a queue that soon wended its way around

A photo posted by Pombo Pix (@pombo_pix) on Sep 30, 2016 at 9:38am PDT The names of San Francisco's most recent homicide victims have been released. [KRON 4] Analyses by local