Although the store wouldn't open until 10 a.m., holiday shoppers began to form a line for Britex Fabrics at 9 a.m. on Monday, a queue that soon wended its way around the block as the store indicated in a Facebook post. The popularity, partly due to a sale, may also have been borne out of patrons' concern that this visit to Britex could be among their last.

In an area devoted to department stores and tourist shoppers, Britex feels cut from a different cloth, one of Union Square's precious few independent, DIY destinations for local makers. But the creatives who frequent Britex for its four floors of textiles were torn up to learn last week that the store might move away from its home of 64 years at 146 Geary Street. 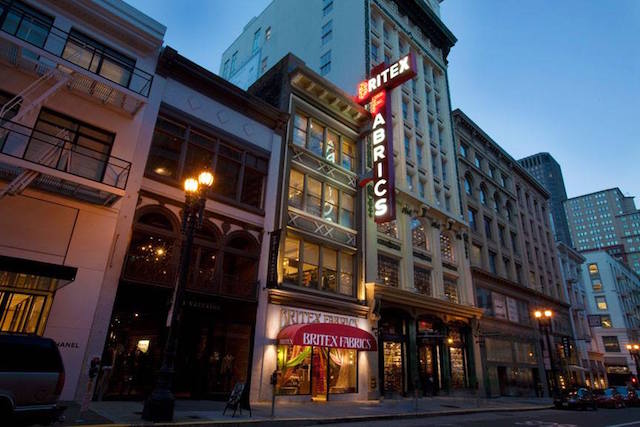 Although representatives assured us that the business would remain in San Francisco, concerns emerged that Britex would be forced to leave its home after second-generation Britex owner Sharman Spector and her family LLC sold the Britex building to City Center Realty Partners and Acadia Realty Trust for $38 million according to the Chronicle. Soon, the new property owners filed a change-of-use application to convert the top three floors of the building from retail to office use, a re-designation that would force Britex out. The application even included provisions for changing the lettering of the popular red Britex sign.

"Britex Fabrics has been in the news lately," store representatives recently wrote on Facebook. "So, what's the real story on Britex? We are not leaving Union Square. The real story at this point is that we've been absolutely overwhelmed by the calls, and emails, and tweets, and Facebook messages from people who are heartbroken at the mere idea that we might be closing." The Chronicle writes that Britex went so far as to hire a greeter to explain the situation on Monday.

How many months Britex may have left on its lease is unclear, though representatives from the store insist that time does indeed remain. Gary Angel, Spector's husband and an attorney, defended the property owner the paper: “From my perspective [they] are good people and good businessmen and have been nothing but open and above board... They are looking at all their options, which is what good business people do.” Angel added, reassuringly, that “Britex is going to be here in Union Square for a long time.”

Previously: Britex Fabrics May Move After 64 Years, But Will Remain In SF

[Be warned a couple of images below are NSFW] An iconic fern bar on Divisadero, which for about 30 years was a neighborhood gay bar before becoming more of a straight-people hang in