History buffs and lovers of all things San Francisco have a chance this weekend to get a taste of ye olden times by riding retired Muni electric trolley buses along routes that have long since been retired. The 5th annual Muni Heritage Weekend starts tomorrow, and with it comes free rides on the historic R-Howard route.

The SFMTA tells us that the R-Howard was launched back in 1941 as the first trolley bus line that went through the Mission. Until that time, the central Mission District had been somewhat neglected (a route ran down Potrero and another down Church). The R-Howard began in SoMa at Howard and Beale Street and ran all the way to Cesar Chavez via South Van Ness Avenue. It was similar in trajectory, SFMTA tells us, to the 12-Folsom today.

A ride back then cost 5 cents, but a version of the same experience can be had this weekend for free. Pick up the R at the San Francisco Railway Museum (free admission) on Steuart Street and cruise around just like your grandparents did. Before you get on the R, check out the exhibit at the museum which focuses on historic Muni cars and lines.

Not interested in riding the R? That's OK, because Muni Heritage Weekend has other options for you. SFMTA is busting out a ton of old buses and trolleys and running them on current routes. Unfortunately, as it's no longer 1941, you'll have to pay regular fare for those.

The fun starts tomorrow, and runs Saturday and Sunday from 10:00 a.m. to 5:00 p.m. both days. If you can't make it in person, check out SFMTA's historic transit route photo gallery. 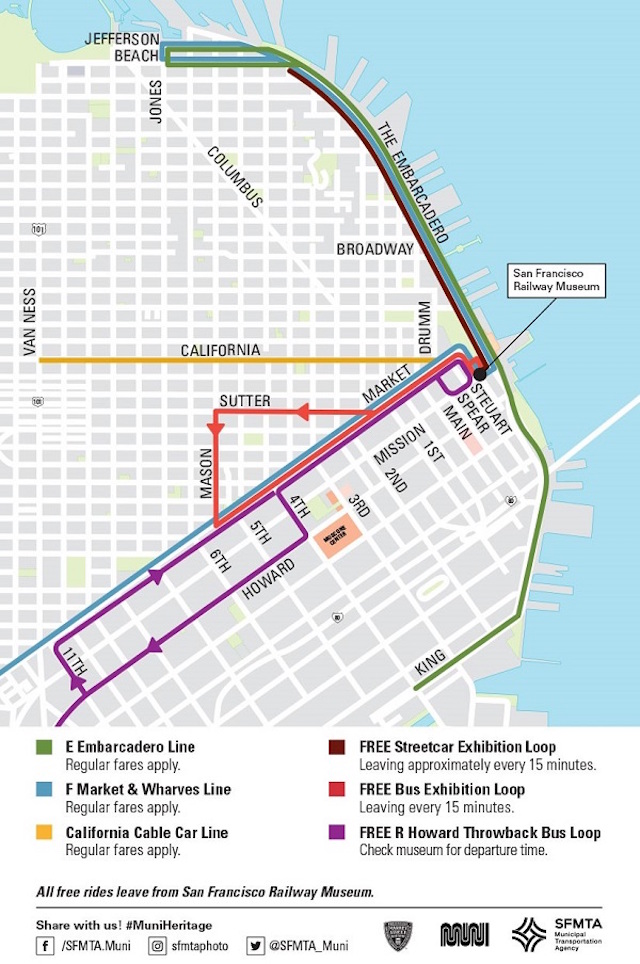 Related: A Brief History Of How San Francisco Ended Up With Electric Trolly Buses

A man waiting in line at a San Francisco homeless shelter was robbed of his possessions Thursday morning, after a criminal duo restrained and mugged him. According to the San Francisco Police Department,

Earlier this month we heard that Twitter's board of directors was considering a potential sale of the company, and today the rumor is out that some buyout bids are in, including ones from