You may not expect an acrobatic, circus-style aerial performance to explore the topic of violence against women. But this improbable concept achieves great heights in Grace and Delia Are Gone, a new dance piece from Flyaway Productions that premiered Thursday night at the Fort Mason Firehouse. Dancers bounce and rappel off walls both indoor and out, perform daring acrobatic maneuvers, manipulate weights and pulleys to keep them afloat, all while remaining in theatrical character in a work that addresses some pretty brutal subject matter.

Flyaway Productions, who have been doing these apparatus-based dance performances with social justice themes for the last 20 years, takes over several different rooms and spaces at the Firehouse at the Fort Mason Center for Arts & Culture for this piece. Grace and Delia Are Gone successfully takes you into the headspace of a woman thinking “My husband beats me and might kill me tonight”, and does so on a former military base. The site-specific magic of this piece manifests with daring suspension stunts in starkly designed sets with the sight of ships floating through the San Francisco Bay in the site’s background. 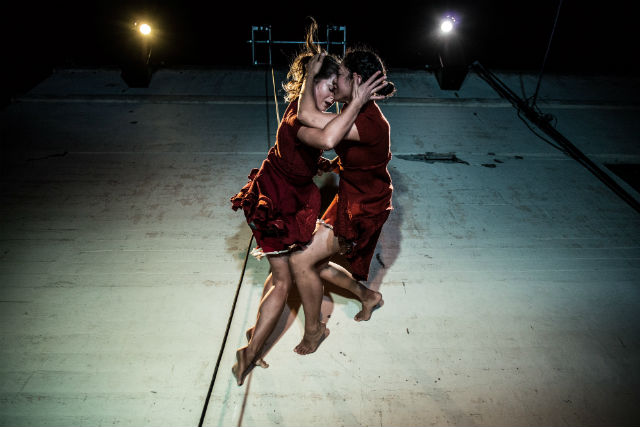 This show’s scenes take place in various different parts of the venue, and segments of the audience see different scenes at different times. In that sense, it’s reminiscent of an old-style haunted house attraction — though maybe a haunted house as conceived by Werner Herzog and Rebecca Solnit. The dancers’ movements are eerily hypnotic, and their wall-walking is on par with Spider-Man. Some abstract portions of the show might not make much sense to people who don’t watch a ton of dance. But there are so many gasp-inducing moments and astonishingly risky moves performed on rafters, fire escapes and large-scale, built-in, site-specific props that you can’t help but lost in amazement.

Artistically, Grace and Delia Are Gone is a powerhouse. Some fussier audience members might not be thrilled that they have to stand for certain segments of the show, and for one segment even have to stand outside by the chilly waters of the Bay. Plus it’s a little tough to find the Firehouse if you’re not familiar with the multiple-building labyrinth of the Fort Mason Center facility (HINT: It’s the northeast corner at the back the parking lot) 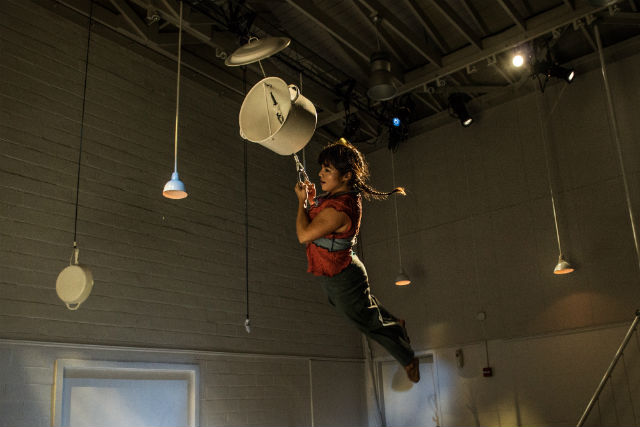 But there is so much to “wow” at in Grace and Delia Are Gone, and much of its appeal comes from the inherent bizarreness and remoteness of the facility where it’s staged. The subject matter isn’t easy to watch and the narrative isn’t always easy to understand. But these suspension dancers are certain to suspend your disbelief in a work you won’t forget.

Grace and Delia Are Gone plays through October 2 at the Fort Mason Center for Arts & Culture. Tickets here.

I have some excellent news. Back in July we heard the ominous news that beloved sh*thole dive bar Mr. Bing's had been sold to new owners, the owners of Ireland's 32 in

While Republican presidential candidate Donald J. Trump doesn't draw a lot of support from Silicon Valley, that which he does tends to be, well, unique. We now have an Exhibit B is the