Long before the environmental movement took off or anyone understood a thing about carbon emissions, a full 81 years ago, SF got its first emission-free electric trolly bus powered by overhead wires. As the SFMTA's blog relays the tale, the first electric bus was operated by the privately owned Market Street Railway Co., and it went into service in 1935. Muni wouldn't end up adopting the idea for its bus routes until the post-war years in the late 1940s, and the reasons were basically economical, not environmental.

Electric buses that didn't require fuel and only required a single operator (streetcars used to require two) were simply cheaper to operate, and Muni was forced to find all ways it could to cut costs as San Franciscans  and Americans as a whole  entered an era of less reliance on public transportation and greater car ownership.

Also, since they didn't run on rails, they were more flexible and didn't require rail maintenance  and the same was true of motor buses, which were put into more service as well. The streetcar system, meanwhile, suffered some poor maintenance during the war years and therefore, during the prosperous late 40's and 50's, were seen as antiquated and slow.

During this period, the East Bay would see the death of its major streetcar system, the Key Line, which once occupied the lower deck of the Bay Bridge  and there would then be no major public transportation network connecting the East Bay and SF until BART's Transbay Tube opened in the mid-1970's. 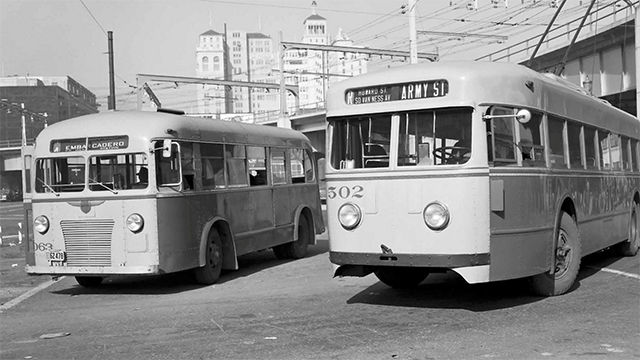 As the SFMTA's Jeremy Menzies explains it:

When compared to motor buses, trolley buses were an even better bargain. With no oil changes, tune-ups, fuel costs or an engine or transmission to wear out, they lasted much longer and cost less over their lifetime. An added bonus in hilly San Francisco was their excellent hill climbing ability, giving them an advantage over both streetcars and motor buses.

Today, Muni operates one of the largest fleets of electric trolley buses in the nation. These quiet, zero-emission buses continue to serve some of our busiest and steepest routes in the city, from the 14 Mission to the 33 Ashbury, the modern descendent of SF's first trolley bus line.

So, if you'd assumed that our electrified bus system was the result of SF's liberal, hippie past, you were wrong.

And these days, the historic streetcar lines (the F-Market and E-Embarcadero), revived beginning in the 1990s, are a major tourist draw, to the point that when they're temporarily replaced by electric buses on those routes, merchants in the Castro see their businesses suffer. 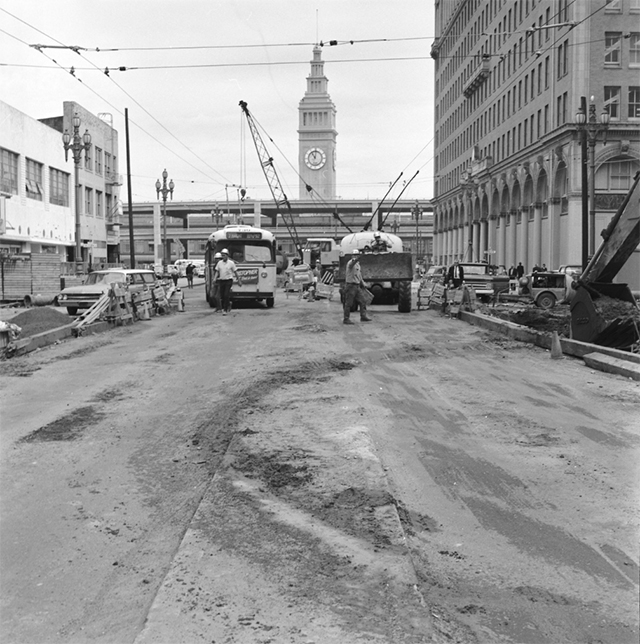 The foot of Market Street during the early days of BART construction, in 1968. Photo via the SFMTA Photography Department & Archive.

This month, Muni is celebrating Muni Heritage Weekend on September 24 and 25, which includes a celebration of "75 Years of Green Machines," with exhibits on both the trolly buses and streetcars.

Check out more rad photos from the SFMTA's archive here.


Image from 1941 of a motor bus (left) beside an electric trolly bus (right). Photo via the SFMTA Photography Department and Archive

Three news organizations  the Associated Press, Gannett, and Vice Media  together filed a lawsuit in federal court Friday against the FBI seeking to have access to the agency's records pertaining to its contract

A group of no-good punks ages 65 to 96 were seen spraypainting a wall at the Institute on Aging, 3575 Geary, under the leadership of noted LA graffiti artist Man One. Scott Power,