Convicted Stanford rapist Brock Turner is less than 48 hours away from his scheduled release, as reported earlier this week, after serving half his sentence  just three months  in a Santa Clara County jail. And, as expected, there will be protests accompanying his release, including one by the group that's been most outspoken about the leniency of Judge Aaron Persky, UltraViolet.

The women’s rights organization is going to be protesting outside Santa Clara County Jail at 190 West Hedding Street in San Jose starting at 9 a.m. on Friday, September 2, holding bicycle billboards that read, "Thanks to Judge Persky, Brock Turner Served Just 3 Months in Jail," like the one below.

They say they plan to encircle the jail, and then encircle the County Courthouse as well, and "attend a press conference outside the Santa Clara County Courthouse later that day to highlight how Judge Persky has consistently prioritized the well-being of rapists and abusers over justice for survivors  and continue their call for his removal from the bench." 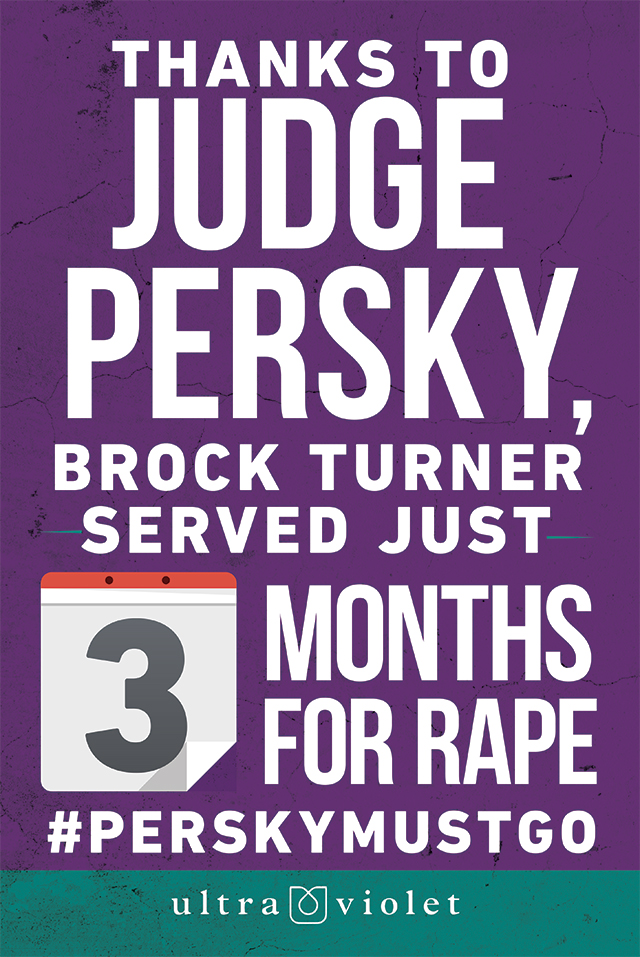 Also, at the Ohio home of Turner's parents, police are expecting protests this weekend as well. Greene County Sheriff Gene Fischer tells WIAT, "We’ve already seen protests by mom and dad’s house. Can I anticipate that happening? I would assume that they will continue. Can I tell you what day he’s coming in? I can’t."

Fisher says that his deputies will be monitoring the Turners' Sugarcreek Township as is their duty when a convicted sex offender takes residence. And he says that while he has not yet received Turner's file, his office will notify area residents once they do. Also, "We will send deputies to the house to make sure he’s living where he’s supposed to be living."

Sheriff Fischer adds, "To me, his return is no different than any other sex offender who comes in here and registers with us. We’re going to treat him the same."

Everyone loves Instagram — the social media platform's algorithmically ordered feed and ripping off of Snapchat makes it the perfect place to view days-old photos of brunch or videos of people's dogs. However, ceaselessly

—
Protests Planned For Friday Release Of Brock Turner
Share this