Two large wildfires continue burning to our south, though the progress of the largest one has slowed, and meanwhile a smaller but more destructive and swiftly moving fire to our north, allegedly sparked by a serial arsonist, has been extinguished, and residents are now assessing the damage.

The Soberanes Fire in and around Big Sur has been kept back from the coastal village and the redwoods immediately along the coast, and its spread to the southeast has slowed somewhat according to Cal Fire. Referring to the Basin Complex Fire in 2008 that burned through much of the same territory, today's Cal Fire update reads, "Fire behavior remains a slow backing and flanking fire through an eight-year-old fuel bed of grass, brush and timber litter." Further, they explain, "The fire’s slow progress southward around Logwood Ridge is allowing firefighters to delay their tactical firing operations." Evacuation warnings remain in effect for Tassajara Road from Carmel Valley to the Tassajara Hot Springs Zen Center, and roads that leave from Tassajara Road.

The fire has topped 90,000 acres now, but firefighting personnel are down to under 1500, after being up well over 4,000 at one point several weeks ago. The fire began on July 22 with an illegal campfire, and it is 60 percent contained.

Meanwhile the Chimney Fire in San Luis Obispo County has reached 43,600 acres and has crossed over into the southern edge of Monterey County. It remains a threat to Hearst Castle, which has been closed in an unprecedented move, but the fire remains about three miles from the mansion at its southern end. Nearly 4,000 firefighting personnel are working to contain the fire, which is now 39 percent contained. 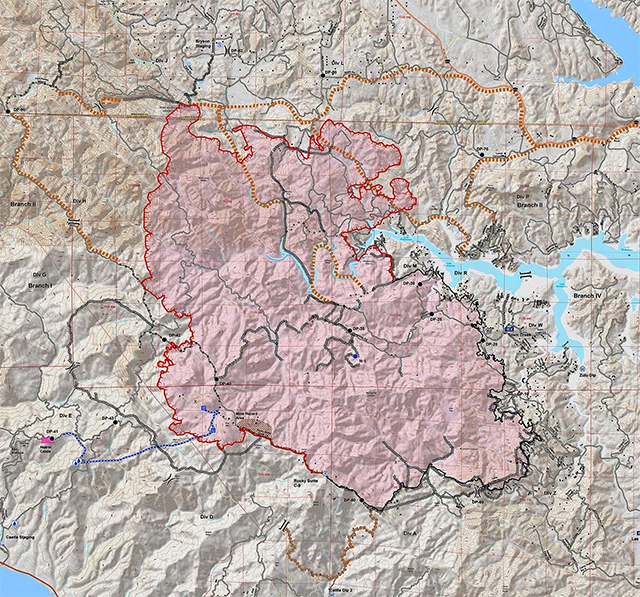 Up in Lake County, residents of Lower Lake are just beginning to return to the area following containment of the Clayton Fire, which by comparison was just a fraction of the size of the two fires discussed above, burning only 3,900 acres, but was in a more densely populated area and burned quickly through several residential neighborhoods, destroying a total of 300 structures. KRON 4's JR Stone went to assess the damage and speak to at least one resident who had returned to find nothing left, as you can see in the video below. They also used a quadcopter drone to show several fully burned out blocks. The fire was allegedly set by this man, Damon Pashlik, a 40-year-old serial arsonist whom police had been investigating for setting several fires last year.

As the Santa Rosa Press-Democrat reported this week, two men who were found in possession of methamphetamine were arrested for being in a closed disaster area, as well as a narcotics charge, while apparently attempting to loot in the area.

The Lake County area has been repeatedly devastated by fire in the last year, having gone through three major wildfires, including the massive Valley Fire that tore through Middletown last year and claimed the lives of four people.

A recent map of the Chimney Fire, from August 23.

In what is either a brilliant exploration of the line between graffiti tagging and public art, or else a typical case of a couple of dudes with too much time and spray paint

BART police are investigating a stabbing that took place at or near San Francisco's Civic Center BART station, after the victim of the attack was discovered on the platform Wednesday night. The Bay