The ever-growing empire of Adriano Paganini, a.k.a. Back of the House restaurant group, will be adding to its empire a fast-casual fried chicken sandwich operation at 115 New Montgomery Street (formerly a location of The Melt) dubbed The Bird. We actually heard the news about the new addition two weeks ago via Hoodline and some ABC application sleuthing, but had no further details. Now, Paganini's reps confirm that the place will feature sandwiches only, and "Working with local, free-range chicken only, our focus will be to make delicious and indulgent food, while using fresh, wholesome and quality ingredients."

There's a website, and an opening timeframe of "early October," and a new logo you can see above which is a fox, I think, with a sandwich in its mouth  I guess they figured actual chickens/birds were overdone as logos at this point? And, to be fair, this is the town of Twitter, and Proposition Chicken has already branded itself with a giant neon chicken. 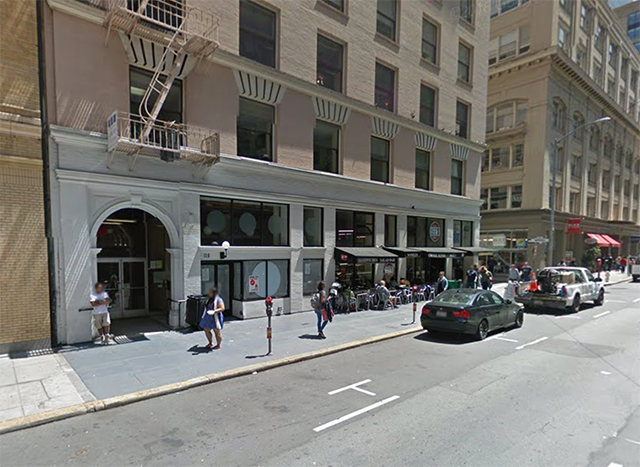 This marks yet another new concept to add to the rapidly expanding list being planned and operated by Paganini and company  just last month we learned he's taking the former Betelnut space next door to his Belga spot in Cow Hollow, for an as-yet unnamed concept, and he's got something in the works in Hayes Valley as well, bringing his total number of restaurants now to 21, including chains Super Duper Burgers and Uno Dos Tacos, Beretta, Lolinda, Starbelly, etc.

Beyond the logo and description above, we don't know much else about The Bird or if it will have anything else on the menu, but they promise it will be an "affordable option" for both lunch and dinner.

The location at 115 New Montgomery, near Mission. Photo: Google

A Fillmore Street Razor scooter rider was cruelly stripped of his mode of transport Tuesday, after two teens ripped it from his grasp. The 31-year-old male victim was piloting his scooter down Fillmore