For the last 18 years in a row, local drag icon Peaches Christ’s annual homage to the delightfully dreadful 1995 box office train wreck Showgirls has been a summer highlight on the stages and screens of San Francisco. The late 90s Midnight Mass showings at the Bridge Theater pelvic-thrusted in popularity to spawn the epic Night of 1,000 Showgirls performances at The Castro, and this year the show takes the form of a full-scale musical theater adaptation in Showgirls! The Musical! which opened last night at the Victoria Theatre. This show, written by Bob and Tobly McSmith, originated off-Broadway in New York in 2013 with a few of these same cast members, but this West Coast stage version does indeed feature Peaches Christ in the role of Cristal, along with a handful of local drag and burlesque stars, and even more fully exposed boobs and asses than the NC-17 original film.

Showgirls! The Musical! is not a faithful adaptation of the cult movie, but you’ll likely enjoy the musical more if you’ve seen it (preferably five or six times) . The overall bad-girl-gone-worse story arc remains the same, but your favorite lines of awful dialogue are altered into wink-and-nod drag jokes, and full-blown musical numbers like “Don’t Lick That Pole, Girl!”. There's also the occasional Saved By The Bell allusion, because of poor Elizabeth Berkley. If you’ve seen Showgirls once, you’ll probably roar at most of these references, and if you haven’t, you might wonder why there is so much use of jazz hands, and why the audience keeps losing it every time there's a reference to a staircase. 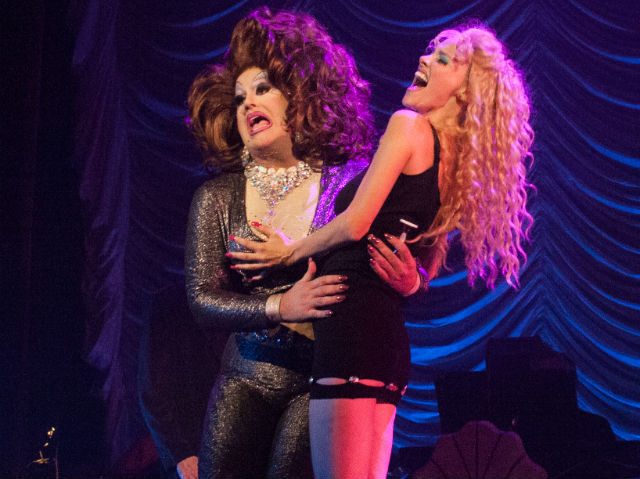 While Showgirls! The Musical! is a Peaches Christ production, this vehicle is powered by New York cast veteran April Kidwell, who originated to role of Spoof Nomi Malone. She’s unmistakably evocative of Elizabeth Berkley, and that’s not meant as an insult. Ms. Kidwell has all the musical theater skills to carry a show, on top of an astounding talent for physical comedy — she can even dance poorly for comic effect or fantastically when she wants to dazzle you. Her singing voice is also solid, and she’s got a Lucille Ball-caliber toolbox of hysterically funny facial emotions that she uses to great effect to mimic Berkley's manic, jerky portrayal of Nomi. At one point Kidwell does a scene of dialogue with a half-eaten hamburger that's so simultaneously ridiculous and poignant it will remain in your mind for days. But Kidwell's relentless, totally ridiculous nudity is worth the price of admission alone, regardless of your orientation  unlike in the film, Nomi's tits make an appearance here within the first two minutes.

Peaches Christ, on the other hand, does not play the Cristal Connors role as a straight-up Gina Gershon impersonation. She pretty much plays it as the onstage Peaches Christ persona you’ve known all these years, just with a slight southern accent and repetitive use of the word darlin’. She farcically mocks and disrespects her fellow performers, she pours out gigantic rails of cocaine jokes, and she hilariously mixes arrogance and self-deprecation in the drag humor tradition. But Showgirls! The Musical! is not so much a drag show, and — with the exception of one memorable number by Raya Light — Peaches is the one and only queen. 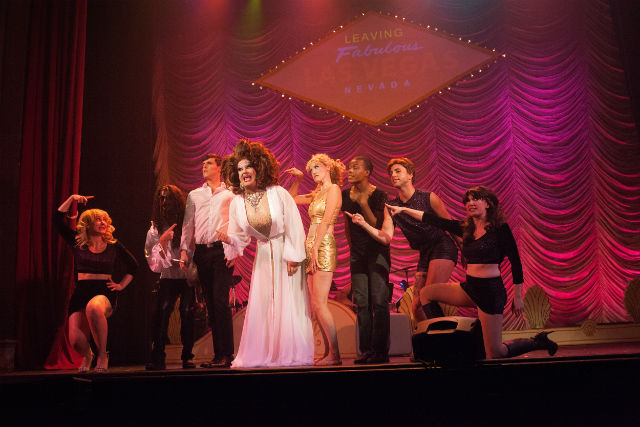 This show’s musical numbers generally aspire to the Flight of the Conchords-style musical satire formula, and some hit the mark better than others. Boylesque performer Bobby Barnaby stands out in his turn as the dance coach character “Gay”, and New York cast member Marcus Desion nails it in a dual role as “the only two black characters”.

Be warned there is egregious (topless) nudity in Showgirls! The Musical!, and its tunes depict the sexual humiliation of women with an “Awww shucks” Rodgers-and-Hart enthusiasm. That’s just not for everyone. There is a character based on the rapist singer in the film named “Andrew Rapersoon” — so yeah, there is some trigger-warning humor employed here. Many of the jokes also depend on a deep familiarity with the original movie Showgirls, and this production is aimed pretty much exclusively at that film’s cult fans.

But in 18 years of producing some incarnation of Showgirls, Peaches Christ has turned many of us into cult fans for whom Showgirls! The Musical! is a totally uproarious comic delight. The play gleefully takes the original source material to new and funnier places, treating it as a text that begs for parody, which of course it is. And see it while you can  Kidwell, more than likely, will be performing on bigger stages and screens, with her breasts covered, sometime very soon.

Showgirls! The Musical! plays Wednesdays-Saturdays at 8 p.m. at the Victoria Theatre through August 27. Tickets are available online.

Related: In Honor Of Showgirls! The Musical!, Drag Star Peaches Christ Gets Ice Cream Named After Her

Six-year-old French bulldog Sassy Pants (actual name), who was lost in Novato, is alive and well according two animal psychics hired by pet owner Kelly Kinnard of Larkspur. Banking on their intuition, the

Apple took a patent out on ring-shaped a wearable health device. [CNet] SF startup may outpace Google in the driverless car race. [Wired] [Facebook] claims that sci-fi readers like cats, not dogs. TV