Three of the costliest rental markets in the nation — San Francisco, Oakland, and San Jose — were all in decline last month according to analysis from Zumper, on whom we have come to rely for regular doom and gloom rental news. What the hell, guys?!

In fact, it was just this past March when we were informed that the Bay Area was home to three of the most expensive one-bedroom markets in the US. At that time we were numbers 1 (SF), 4 (Oakland), and 5 (San Jose) on the list, and now San Jose and Oakland are reversed. Take a gander: 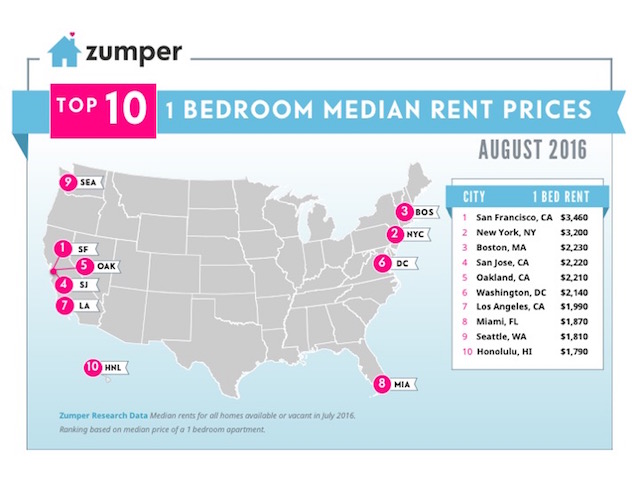 "San Francisco, CA continued to see a decline in median one-bedroom prices, which dropped -1.4% to $3,460," Zumper writes. "Two-bedroom prices remained fairly stable, increasing just 0.4% to settle at $4,790. While San Francisco remains the most expensive market in the U.S. by a significant margin, our analysis suggests that San Francisco rents have flattened and are beginning to decline."

This data is fairly unsurprising, actually, given the huge new supply of market-rate housing that came online in the last twelve months, with multiple developments all competing for new tenants by offering a free month's rent and other incentives. It remains to be seen, though, whether there is any truth to a separate report from April that suggested rents are poised to skyrocket over 10 percent by year's end.

San Jose, for its part, saw a 2.6 percent decline in one bedroom prices, falling to a median of $2,220, and a two bedroom decrease of .07 percent to $2,880. Meanwhile, Oakland sunk to fifth in the rankings, headed down 2.6 percent in the median one bedroom category and 1.8 percent in the two bedroom category. That said, they've gone up 11.6 percent year-over-year, they're just down this month, completing the trifecta of downturns and raising our hopes with it.

Related: Report: Bay Area Home To 3 Of The Most Expensive Rental Markets For 1 Bedroom Apartments In The US

A 9-year-old boy drowned during a family trip to the Arroyo Seco Campground in Los Padres National Forest on Sunday. [KRON 4] Is it a double standard if I think a 24-year-old guy

The controversial "tech tax" is dead for the time being, with a 2-to-1 vote yesterday by the Board of Supervisors’ budget committee meaning the measure will not be sent to the full board

—
SF, Oakland, And San Jose Rents All Went Down Last Month
Share this