Designer and coder Chris Arvin put in some major hours in the SFMTA archive to create a fun new interactive map about the many, many streetcar lines that used to fan out all over San Francisco, on basically every major thoroughfare. The map shows the streetcar lines at their height in 1940, and then their abrupt disappearance by 1960, when many were replaced with buses, and when all there was left were the five streetcar lines that would ultimately become the routes for the Muni Metro, the J-Church, K-Ingleside, L-Taraval, M-Oceanview, and N-Judah. Jump ahead to 2016, and we have all these as light-rail lines along with the T-Third, as well as the F-Market streetcar and the new E-Embarcadero. Then, come 2020, we'll have the partially above-ground Central Subway as well, extending the T-Third directly up Fourth Street and beneath Stockton.

Click around the map and you'll see, like below, that not only can you highlight the routes and learn their names, but four historic photos appear below the map depicting that streetcar line as well. 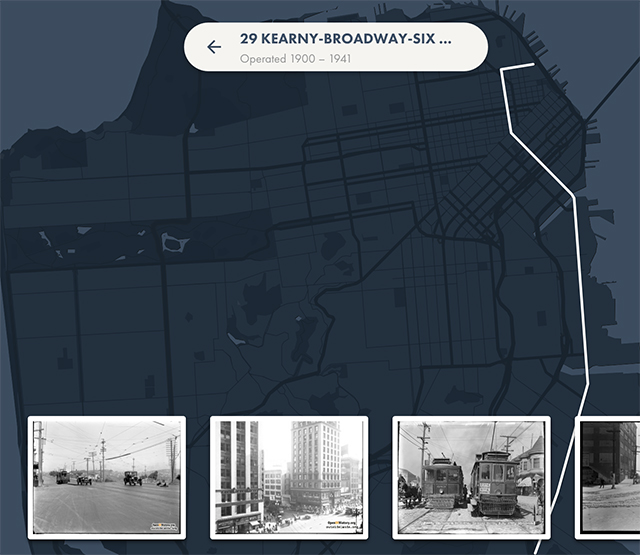 Arvin told Hoodline that he was inspired to start the project after falling in love with San Francisco and seeing "the history of our public transit in many places... and even seeing the partial remnants of tracks in the road in Potrero." He went about researching at the SFMTA, and found that information on the many streetcar lines was very scattered, and he wanted to gather it all in one place. Thus, transit nerds now have this handy history tool to play with.

Another unfortunate impact of the still growing, 10-day-old Soberanes Fire is that it could end up destroying the 2016 vintage for some Monterey County wines. Smoke from wildfires has been known to do

In hindsight, it was only a matter of time. Now, strong-stomached diners in search of the next hip food trend need look no further than the pages of Edible San Francisco and their