This week, Apartment Sadness takes you to tony Pacific Heights, where apparently the address alone should be enough for you to want to share a four-bedroom, two-bath flat with three to seven of your friends for $8000 a month  even though a couple of those bedrooms are really cramped and tiny looking.

Four-bedrooms that aren't old railroad, rent-controlled units with super cheap rent and a master tenant who's been there since the mid-80's aren't so common in San Francisco, but this one, which is likely someone's condo, arrives fully furnished if you want it to  the ad says it's $7,795/mo unfurnished, or $8,295 furnished. Now, if you have three good friends you'd like to share it with, that's a steal compared to this custom furnished one-bedroom near Dolores Park that hit the market last summer for $6,800. For a one-bedroom.

But take a look into the many photos of this unit at Sacramento and Lyon, and you're going to start to understand why this is, relatively, a deal, especially for 4+ people: It really wasn't meant to be a four-bedroom. It is a railroad-style unit with multiple pocket doors separating rooms (those things are not in any way sound-proof, you know), and they've squeezed a dining table into this living room and I'm pretty sure this is one of those deceptive realtor's cameras that make the room look way bigger than it is. 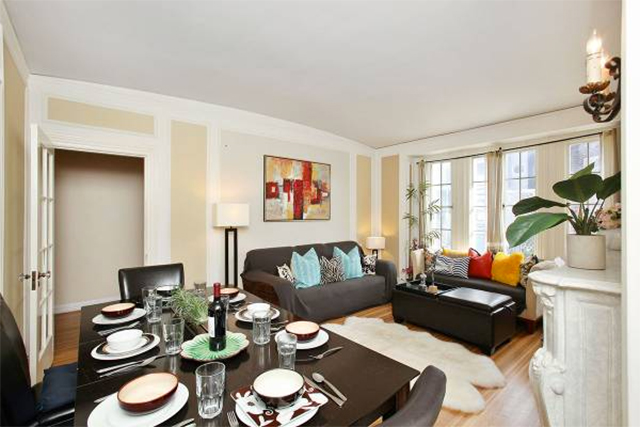 Here's Bedroom #1 that's basically off the kitchen, and was definitely shot with one of those wide-angle lenses. 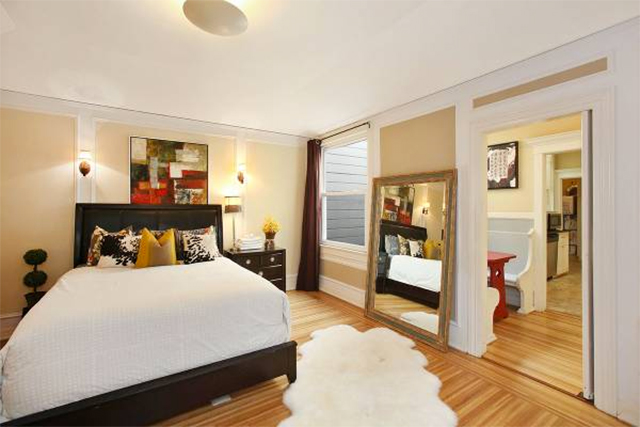 Here's another that is only barely big enough for that full-size bed, and was perhaps a sun porch at one time? 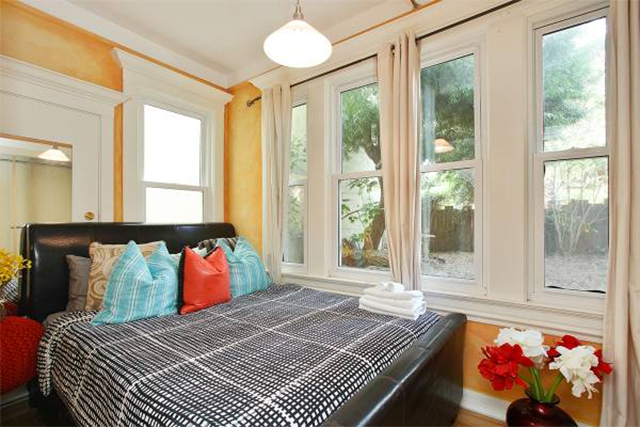 Here's Bedroom #3, and oh look! The tiny sun porch bedroom is right there  see the bedspread through that open door? Yeah, that person, with the bed literally jammed against the door, has to walk through Bedroom #3 to get anywhere, like the bathroom. 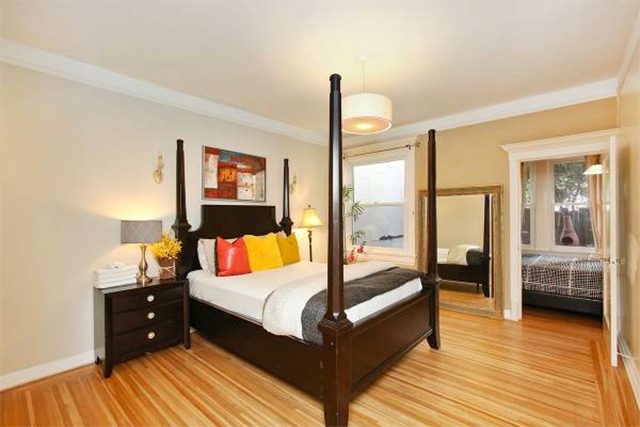 Actually, here's a view from one of the bathrooms that shows the person on the sun porch has a choice between walking through Bedroom #3, or Bedroom #4. 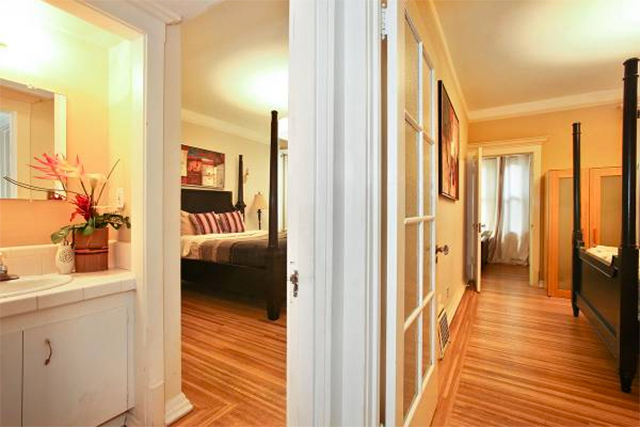 So maybe that sun porch is best used as a guest room? Here's Bedroom #4, with the sunporch peeking through at the back. 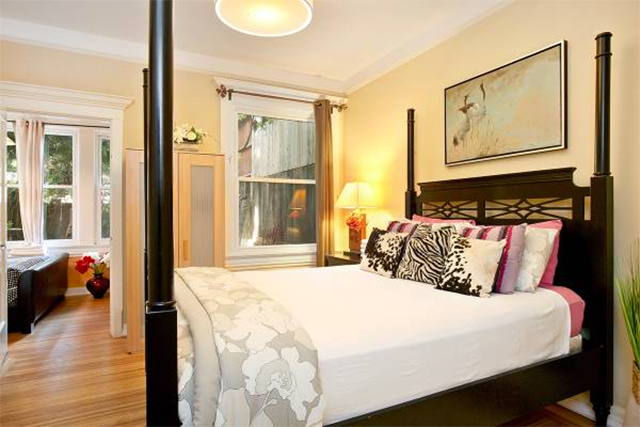 I'm not completely understanding the layout, but here's a view from the breakfast nook through Bedroom #1, and those pocket doors on the other side I believe lead back to the living room. Basically, Bedroom #1 was meant to be a dining room. 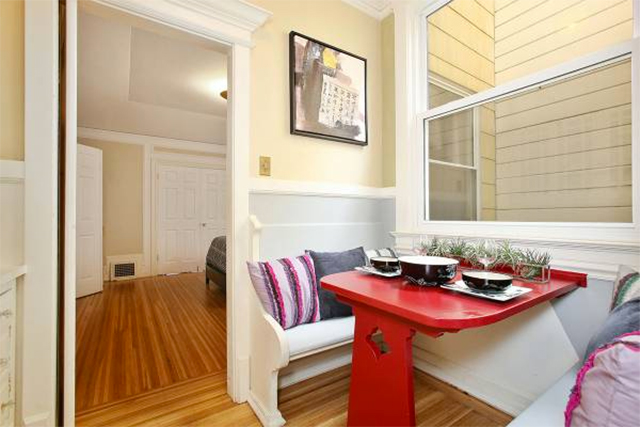 And here's the kitchen, which has almost zero counter space, so hopefully nobody is going to get too ambitious with that Viking range. 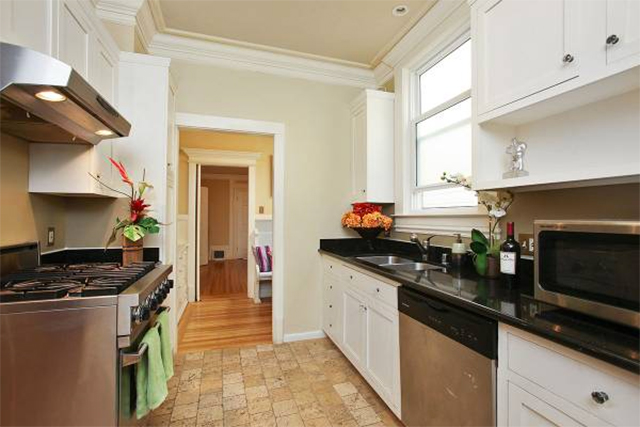 There are only two toilets, though the ad tries to confuse this point  there's one bathroom where the toilet is split off behind its own door, separate from the tub and sink, old-timey SF style, and the writer of the ad thus says "There are total three bathroom areas." But it's not a two-and-a-half bath, it's a two-bath, with two toilets, two sinks, one shower, and one tub. 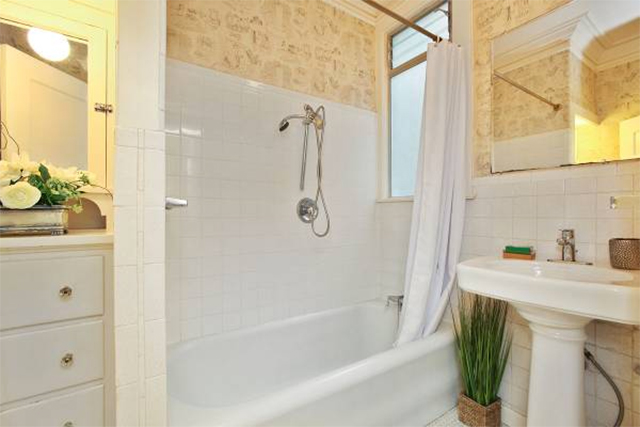 And I'd wager the second bathroom with the shower was built into a closet or similar. 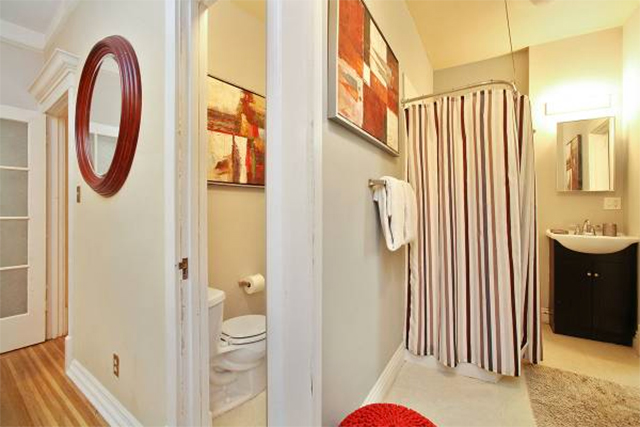 So what was once most likely a two-bedroom, one-bath apartment, is now a "four-bedroom" with an extra shower added and one bedroom that no adult should have to live in because you'll have to coordinate bedtimes with everybody or traipse through their bedrooms after they went to sleep, or whenever you had to pee.

The extra tiny bedroom could be given to a child, and maybe that's the intent of the ad since one of the only neighborhood details given is "It is 1/2 block from the library with an impeccable children's book collection and the Alta Plaza Park."

I digress. This is still being marketed as a potential deal for multiple adult roommates, especially given the furnishing option, and it's an awkward one no doubt, because of all of the above.

But it's in Pac Heights! And it looks newly renovated and stuff!

This week in SFist's food section, we brought you the saga of DaDa Bar, the longtime bar and art gallery trying to relocate from Second Street to Post Street and being met with

—
Apartment Sadness: Anyone Need An $8000 Four-Bedroom (That's Not Really A Four-Bedroom)?
Share this