The co-worker of a Reddit user got a little extra protein in her salad yesterday, when she reportedly discovered a rat — or, at least, part of a rat — in a meal allegedly prepared by a San Francisco restaurant

In a post amusingly entitled "Just caught a Rattata during lunch!," Reddit user makalive45 says that a coworker "just found this in her pre-packaged salad catered from Andersen Bakery in San Francisco." And what is the "this," as it's unclear from the above photo? A mangled, dead rat, as you can see in the picture at the bottom of this post. It is very yucky, so don't keep scrolling if you have delicate sensibilities!

Andersen Bakery, which is part of Japan-based holding company The Andersen Group, has variously-named stores and cafes across Denmark and Japan, as well as numerious locations in the Bay Area. The salad in question, according to makalive45, "was catered from the one on Market and 1st," (which would be their 525 Market Street location).

However, numerous Reddit commentators say that Andersen gets "their salads from the same off-site facility," which might make the allegedly-tainted salad's point of purchase immaterial.

Numerous emails sent to Andersen Bakery and The Andersen Group by SFist were not returned at publication time.

And, now...here's the alleged salad rat. Don't say I didn't warn you. 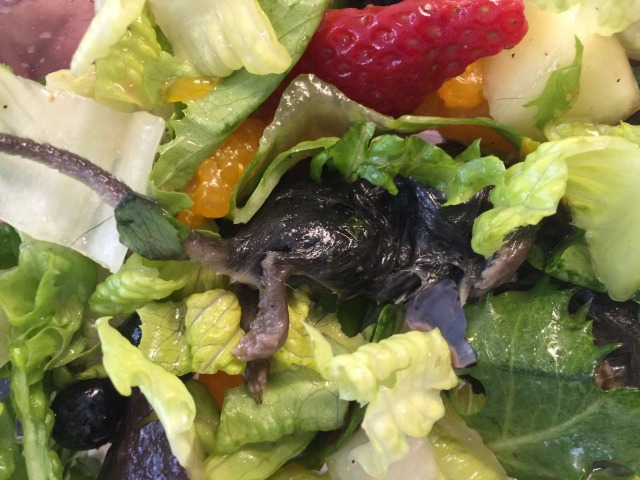 Photo of "Rat in salad from Andersen's Bakery in SF": makalive45

There's a funny bit of trivia behind this new single and video from Oakland-based duo Steel Cranes. As vocalist and guitarist Tracy Shapiro tells it, she and the other half of this duo,

On Monday, [Google] is "introducing a new tool in Search to simplify the voter registration process to make it easier for you to have your voice heard." Plans to raze the infamous "purple