San Francisco's infamous DJ and dance-a-thon collective the Space Cowboys, the legendary party proprietors of iconic annual Bay Area blowouts like Ghost Ship, Breakfast Of Champions, and the whimsical travels of the celebrated mobile sound system the Unimog, celebrates their 20th anniversary tonight with a rump-shaking reception Friday at Public Works. To mark the occasion, we spoke with some founders and a few of their best-known DJs to get the backstory on all the ups, downs, and stellar stampedes behind 20 years of the Space Cowboys.

Originally an outlaw band of underground party proprietors, the Space Cowboys are not all boys, they didn’t used to be called “Space Cowboys” and they did not always have a Unimog. The Cowboys were a Burning Man theme camp before Burning Man had theme camps. "Big Burning Man camps and crews last, on average, about five years," said P.K., a Cowboy since 2000. “We’ve been going around for four times that.”

The Cowboys’ roots go back to the pre-candy raver era of the early 1990s, when they were an underground party outfit called Ripe that would throw random raves on a dirt road off King Street. “The Cowboys had renegade happy hours,” said DJ Sh00ey, a Space Cowboy since 2007 who recalled the stories she’d heard. “This was in the more lawless days of San Francisco when you could get away with a lot more things. They were like the Pied Piper,” attracting ravers who did not even know a rave was scheduled.

They became the Space Cowboy as we know them in 1996, formally adopting that name with their 1997 Burning Man theme camp. They were ‘The Corral’ for a few of their art cars, most notably one called The Horse, a 6-foot tall vehicle with an eccentric wheel that was actually steered by reins. “We used to have these fake cows,” PK recalls. “But then it really just served as a parking lot for all of our crazy art car creations.”

Their most crazy art car creation would be born, like so many Burner creations, out of an accidental explosion. 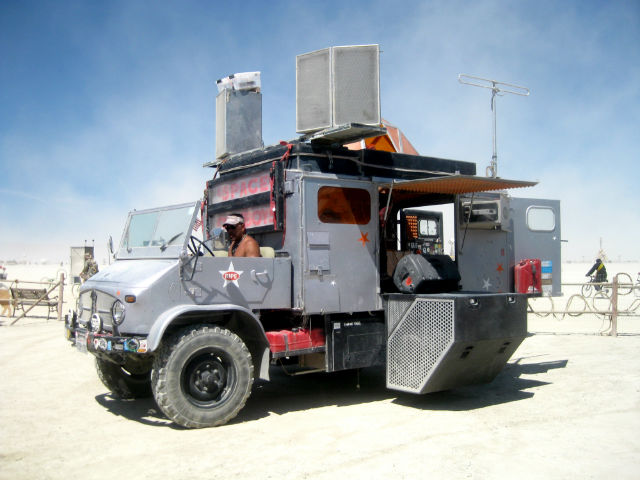 The Unimog (2000)
To this day, the Cowboys’ most beloved creation is probably the Unimog, a 1973 Mercedes military radio truck equipped with giant video screens and “16,000 watts of audio assault”. Colloquially referred to as “The Mog”, Burning Man’s first large-scale sound system was a collaboration between the Space Cowboys and unrelated camp named Space Lounge, who were connected by drastic circumstances.

“We were testing [our] sound rig, and there was an explosion,” recalls former Space Lounge member PK. “The DJ at the time got her hair singed and thrown to the back of the room. Things exploded all over and we lost a good chunk of our sound gear. Most of our speakers blew.”

Scrambling for replacement gear in their (still-existent) art car Martha, the Loungers would run into a founding Space Cowboy. “Along the way, this guy in silver sequined pants riding a mechanized horse drives up alongside us and introduces himself, and asks if we’re Space Lounge and why our faces are so glum,” said PK. “We tell him what had just happened, that we’re screwed because we just blew up our sound system, and he literally says ‘That can’t be. We can’t have a Burning Man without Space Lounge.’

The camps merged that night, with the Cowboys lending their sound gear. The idea of the Unimog formed as the two groups, camped on different ends of the playa, shared speaker gear. When the Mog itself was acquired in Vallejo and hit Burning Man the following year (it was literally assembled on street parking spots at 17th Street and Guerrero) it soon became an opera-blasting staple at the Temple Burn and implemented FM radio transmitters so other art cars could tune in and play the Mog’s music. "The Unimog was the first and it was definitely the biggest sound car at Burning Man," PK told SFist, "until whenever Robot Heart showed up for the first time, I believe.”

“The Mog pleases all” DJ Sh00ey said of the mobile system. “If you bring the Mog there, people will come.” 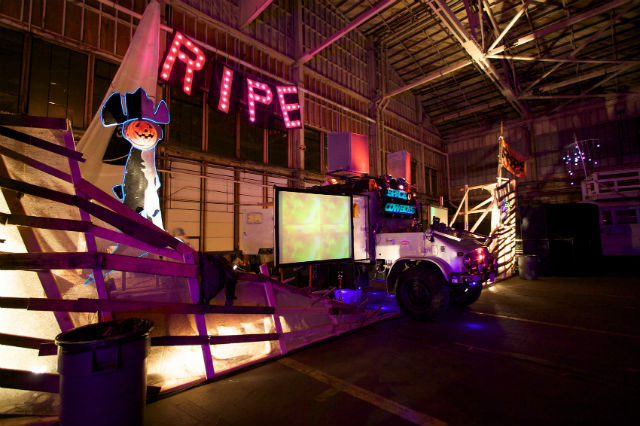 “It’s probably one of the greatest things we’ve ever done,” PK recalled. “It went all night. We closed down the street. We had the Unimog, we had projections on the front of the church, we had Martha parked outside, we had people doing fire-spinning, there was fire art. And the community really came together.”

“Space Cowboys parties were always called ‘Something’ Lounge,” he said. “And it was Tumor Lounge. It was a hospital-themed Halloween party, really macabre and ironic.” The party raised nearly $40,000.

“Everything we do is above-board, professionally run and managed,” PK said of how the Cowboys operate in the modern era. “But in those days, it was really sort of a wild, wild west, much more art-influenced underground renegade, seat-of-your pants creativity.” 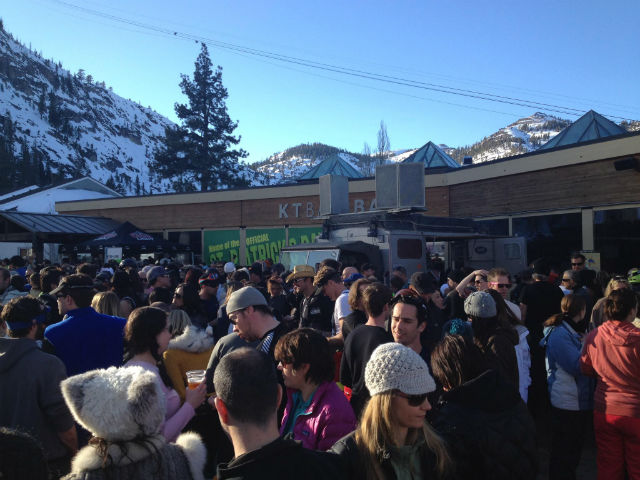 SnowFest (2002)
The Cowboys took it to Tahoe in 2002 for a party now called SnowFest. Held at the base of KT-22 at Squaw Valley, SnowFest is for ravers who love to ski and is now Squaw’s biggest day in food and beverage sales every year. The Unimog gets hauled over the Donner Pass (and frequently gets snowed in).

“One of the original founders lived in Tahoe, and me and him had this brilliant, wacko idea — mostly him — that we would bring up the Unimog to Squaw,” PK said. “First we had the idea of bringing it onto the snow, but we discovered how heavy the Mog was. It tended to sink into the snow.”

One year, the Space Cowboys threw a Full Moon summer party in Tahoe and drove the Unimog up an 8,200-foot mountain to the High Camp Pool and Hot Tub. They only did it one year, in part because full moons rarely fall on Saturdays, and in part because driving the Unimog up a mountain is so goddamned impractical. “Getting the Mog up to Tahoe is always an undertaking. It’s an amazing car, but it doesn’t really like to go uphill very fast,” PK said. “Who wants to sit in a car for six hours in the Unimog that’s unheated and loud?” 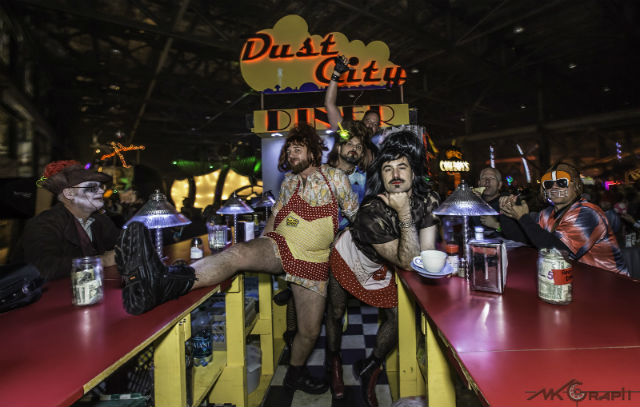 Ghost Ship (2008)
The Space Cowboys had thrown notorious Halloween parties for several years at different SF locations, including SF Motorcycle Club, churches, abandoned studios, smaller warehouses, and Temple Nightclub. Ghost Ship was born after Halloween from the ashes of the Castro Street celebrations after violence had marred those celebrations in 2006. The Unimog crew had taken its first year off from Burning Man, and Cowgirl Andrea Lundquist toured freshly abandoned spaces on Treasure Island. The party radar was set to alert, emails were sent among the Cowboys. and other camps to solicit collaboration.

Breakfast Of Champions Brings Big Bucks For Charity
The first Breakfast Of Champions was in 2001, and has evolved into a blockbuster charity fundraiser that in 2016 raised a staggering (get it?) $24,000 for the SF-Marin Food Bank. The charity donation idea was hatched by Space Cowboy Andrea Lundquist, and has since led to more fundraisers for the foster kids organization Connection For Youth, Beats For Boobs, Burning Man Arts, Flux Foundation, Flaming Lotus Girls and more.

And the Cowboys match all donations at events like Breakfast Of Champions. “When you have three to four thousand people coming through the door, it doesn’t take much to collect a lot of money,” Sh00ey told SFist. “You have people emptying the change out of their pocket, and the Cowboys are matching that. So people who give like 50 cents, 50 cents turns into a dollar for the Food Bank.” 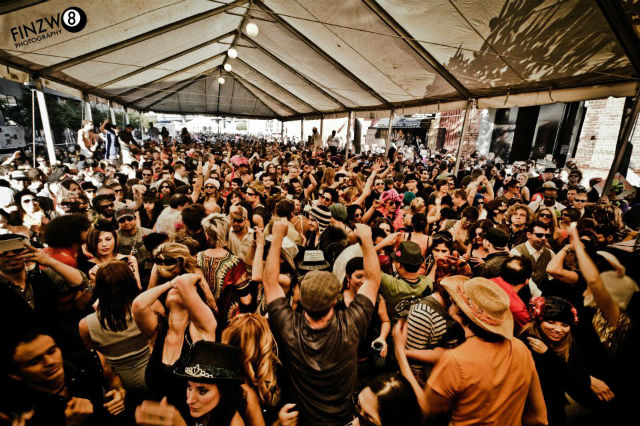 The selflessness and community focus of the Cowboys may be the secret to their longevity. “We believe in a sort of collective identity,” PK said. “We’re a crew, and what matters first and foremost is the crew and not any one individual.”

“It’s just a bunch of friends who come together and have fun and make art and play music,” Sh00ey insisted. “They held true to that for many, many years. As Breakfast Of Champions and all these other events start to get bigger and bigger, it still maintains that attitude, that scrappy, we’re not doing this for fame and fortune, we’re doing this because we love it and we love dancing.”

“The Cowboys have followed that vision over the years. Whatever the original Cowboys established, that has continued on. And I think people can feel that.”

NOTE: This article has been updated with additional detail about the Ghost Ship event.

A man was rescued this afternoon after he fell from the cliffs near Sutro Baths into the ocean and swam to a nearby cave for safety. Shortly after 3:15 p.m. today,

In the final episode of this past season of the HBO show Silicon Valley, a character seeking to justify questionable business practices puts it this way: His core product is solid, if some