Founded in 1959, San Francisco Mime Troupe have been jam-packing Dolores Park for a July 4 show for years and years. But they weren't always called the “San Francisco Mime Troupe," they didn’t perform outdoors, and they were, in fact, originally performers of silent mime. In advance of Monday’s July 4th SF premiere of the troupe’s 2016 offering Schooled, we look back on the 57-year history of this political satire musical theater ensemble that launched the careers of Bill Graham and many others, and has brought so much joy to decades of summer holiday weekends. 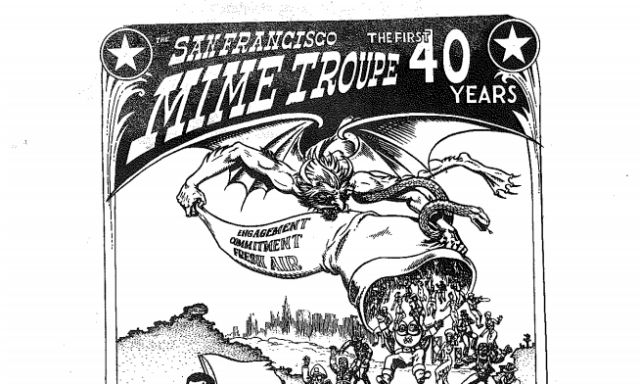 1959: The RG Davis Mime Troupe
The troupe was founded in 1959 and performed at standard indoor theaters at the 11 p.m. Sunday night slot, when “respectable” shows had already finished. Their performances were silent, experimental movement pieces. Founder RG Davis soon came to favor the Italian commedia dell’arte style, incorporating outlandish, stereotypical characters and lowbrow political comedy. Game Of Thrones fans will recognize this style from the theater group that Arya has recently mixed up with.

The troupe started performing outdoors in Washington Square Park with their 1962 production of The Dowry and took on the name San Francisco Mime Troupe. As part of the deal, SF Rec and Parks had to read and approve the scripts before approving the performances. Rec and Parks would typically request changes, which the mime troupe would routinely ignore. This arrangement continued without incident. 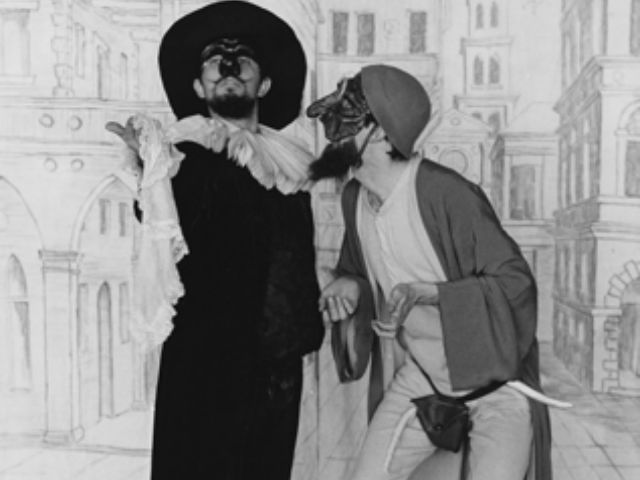 1965: The SF Mime Troupe Gets Arrested
The summer 1965 production Candeliao made extensive use of phallic humor, and Rec and Parks was pissed. After three performances, the permit was canceled though shows were still scheduled in Pacific Heights’ Lafayette Park. With the certainty of being arrested, the players incorporated their arrest into the show by beginning it with the following dialogue:

And that is exactly what happened. The actor was promptly arrested and the production shut down. Lawrence Ferlinghetti and others grabbed microphones and read the rest of the play out loud, but the troupe had still had the legal problems to contend with.

In response, the group’s business manager, a plucky young fellow named Bill Graham, wrangled a three-month old band called Jefferson Airplane to play a benefit show to cover the legal fees. The event made a whopping $4,000 ($30,000 in today’s money) and Bill Graham quickly realized that he could not make that kind of money in the community theater racket.

Graham left, but the troupe acquired an actor named Peter Coyote, whom you’ll recognize from E.T. and the narration of Ken Burns documentaries. 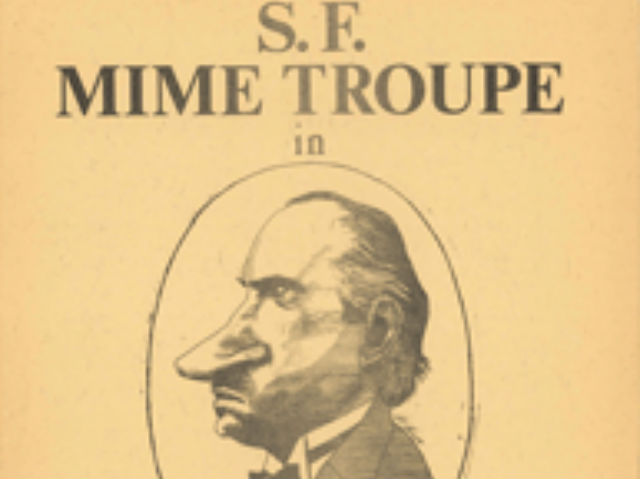 1970's Bring Music, Fame and Feminism
The troupe’s new notoriety brought international tours, and their repertoire turned to wacky, original musical satires when founder RG Davis left the group. The group abandoned its formula of refurbished Brecht and Beckett plays to do zany, topical satires with names like San Francisco Scandals of 1973 and Frijoles or Beans To You. The cast intentionally incorporated more women and people of color, the topics covered equal rights and the secret CIA drug trade, and the troupe began to resemble the San Francisco Mime Troupe that we know today. 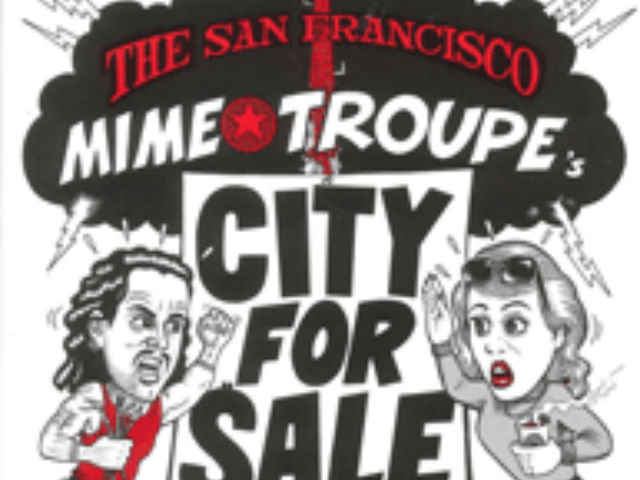 1980's: Reagan Years Bring Cutbacks
The earliest San Francisco Mime Troupe holiday weekend shows that we can document happening in Dolores Park occurred in the 1980's, when economics forced the mime troupe to scale the project back. But they also became the first US theater troupe to perform in communist Cuba, received their first NEA subsidy in 1984 (a grant fought by the Jesse Helms-era congress) and won a Tony award in 1987. 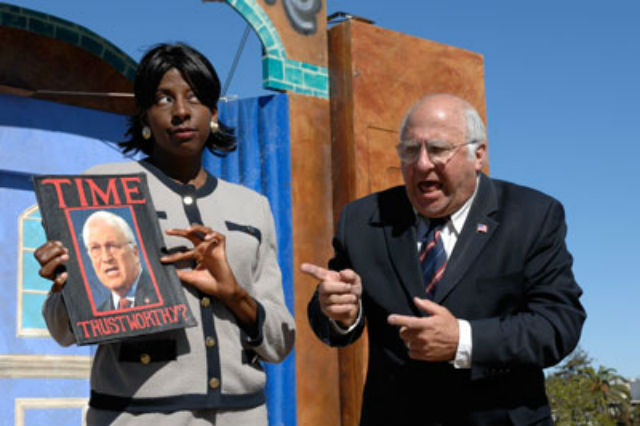 2000's: W. Bush Years Bring A Dick Cheney Look-Alike
In 2001, longtime troupe member (and St. Stupid’s Day Parade founder) Ed “Bishop Joey” Holmes faced a conundrum — he was a left-wing activist who looked just like Vice President Dick Cheney. But the troupe used him to great effect in their aughts-era productions 1600 Transylvania Avenue (2001), the Josh Kornbluth-penned Mr. Smith Goes To Obscuristan (2002), Veronique of the Mounties (2003), and Making A Killing (2007). Holmes memorably played Cheney several times, alongside Velina Brown (as Condoleezza Rice) to create a 1-2 punch running satire of the W. Bush administration in which a W. Bush character never once appeared. 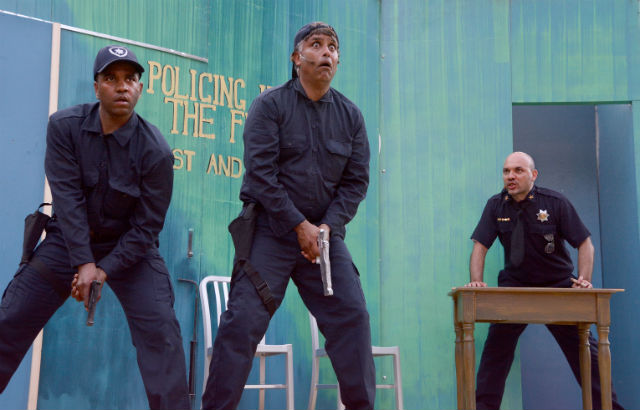 The SF Mime Troupe Today
Condoleezza Rice impersonator Velina Brown is still with the SF Mime Troupe and starring in the new production Schooled, as is 1980's-era member Keiko Shimosato Carreiro.The SF Mime Troupe celebrated its 50th anniversary in 2009 and has left an indelible mark with 20 years of its Youth Theater Project in addition to decades of great, free 4th of July shows in Dolores Park.

‘Schooled’ plays Monday, July 4 at 2 p.m. in Dolores Park, with shows Saturday, July 2 and Sunday, July 3 at 2 p.m. in Berkeley’s Cedar Rose Park. Additional shows are scheduled throughout the summer, all shows are free.

A 19-year-old man was left bruised and unconscious Thursday afternoon, following a violent altercation with a group of men and woman on Market Street. According to the San Francisco Police Department, the youth

A patron of the San Francisco Opera is recovering today, after she was violently mugged last night as she was leaving the performance venue. It was 10:45 p.m. Thursday evening when

—
The Hellraising History Of The SF Mime Troupe
Share this