Timed neatly to the crest of homelessness coverage being released this week by local outlets in an effort called the SF Homeless Project  a push to shine a brighter media light on an enduring problem  Mayor Lee unveiled the city's second Navigation Center yesterday. A program to provide shelter and services in a more comprehensive and permissive atmosphere than in years past, the flagship Navigation Center opened last year in the Mission after much ballyhoo and some delays. Further centers were also slow to arrive, and most recently, the Board of Supervisors gave the go-ahead for six new shelters earlier this month, or five not counting this second one.

The location of the second Navigation Center, a spot announced in March, is the Civic Center Hotel, a downtrodden SRO slated for redevelopment in two years to become 550 units of housing. That's an improvement on its current 156 rooms that, until the Navigation Center population began to arrive, served just 53 residents. 93 beds are being offered to homeless people there, and while some have already been filled while the SRO was being renovated according to the Chronicle's reporting, 40 more shelter rooms have yet to be filled.

“Living on our City’s streets is not healthy or safe,” a press release quotes Mayor Lee. “Although we have housed and provided services for thousands of people already, we still have work to do. The Navigation Centers are an important piece in solving homelessness for those individuals who face multiple challenges to returning to housing.”

Meanwhile, new homeless czar, or rather Department of Homelessness and Supportive Housing Director, Jeff Kositsky, whom we wrote about a bit here, announced another effort to aid homelessness: an Encampment Response Team. “Just like many San Francisco residents, I’m concerned about the impact of encampments in our community," Kositsky said. "The camps are unsafe and unhealthy for people living in them and are highly disruptive to our neighborhoods... The new Encampment Response Team will ensure our residents living in encampments receive the shelter and services they deserve and that our neighborhoods remain safe and healthy for families and everyone."

According to the Controller's Office, the first Navigation center has been a relative success. More than 80 percent of its clients who have left its doors have gone on to supportive housing or reconnected with friends or family to stay with. As of March, a report showed that 468 clients had used the Navigation Center: 142 were placed in permanent housing after an average of 88 days, and 168 took advantage of the Homeward Bound program. The report also issued this useful chart. 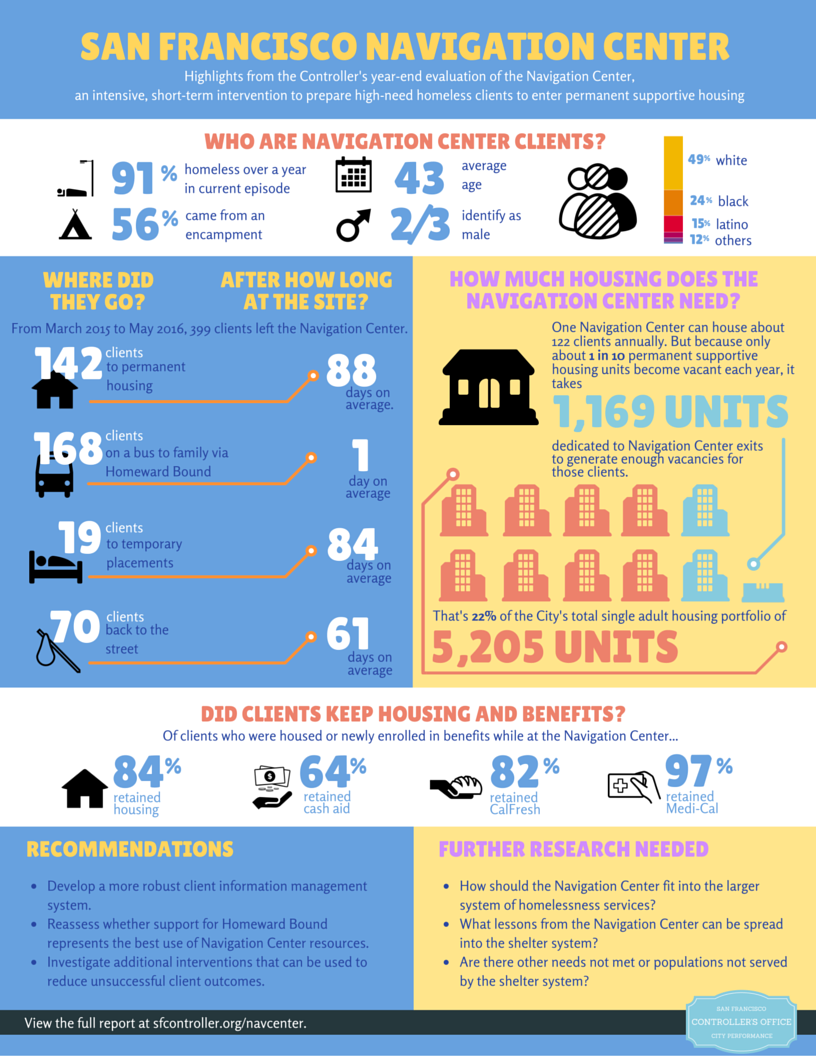 via the Office of the Controller

A proposed payroll tax on San Francisco tech companies is already making enemies, and it's not even on the ballot yet. The Chronicle reports that the measure, introduced by Supervisor Eric Mar yesterday

[Facebook] announces changes to its News Feed, will give priority to items from your friends and family over posts from pages you follow. An ode to "Summer, San Francisco style." [Fog City Notes]