Thousands of people people turned out last night at a Castro District vigil to honor those killed and injured in Sunday's mass shooting at an Orlando nightclub, an event that turned to a march to San Francisco's City Hall. 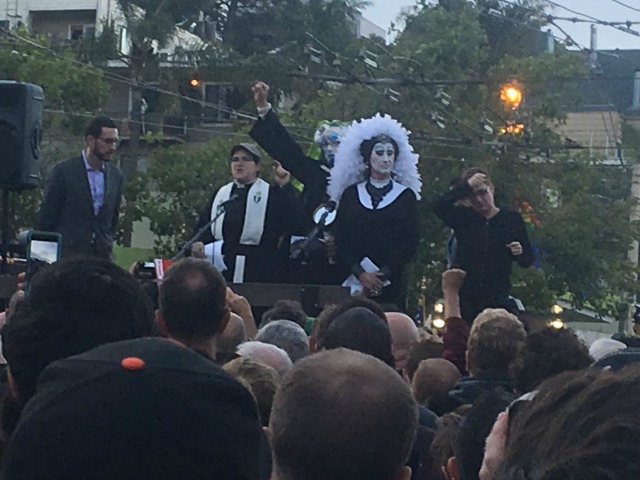 According to Mission Local, Supervisors Scott Wiener and David Campos, the only queer members of the Board of Supes, emceed the event, which featured around a dozen speakers, from the beds of two trucks "as police guarded the edges of the massive assembly."

Hoodline reports that, "An SFPD officer at the event estimated that 10,000 people were in attendance, though that number has not yet been confirmed by authorities."

That crowd included visitors like Kat, a woman SFist contributor Joe Kukura (who was reporting from the event) referred to as "Woman Who Handed Out Hundreds Of Free Candles," who was visiting SF as a tourist.

“My sweetheart told me the news this morning," Kat told SFist. "I just felt completely helpless and I wanted to do something to help. At least this makes me feel like I’m doing something.” 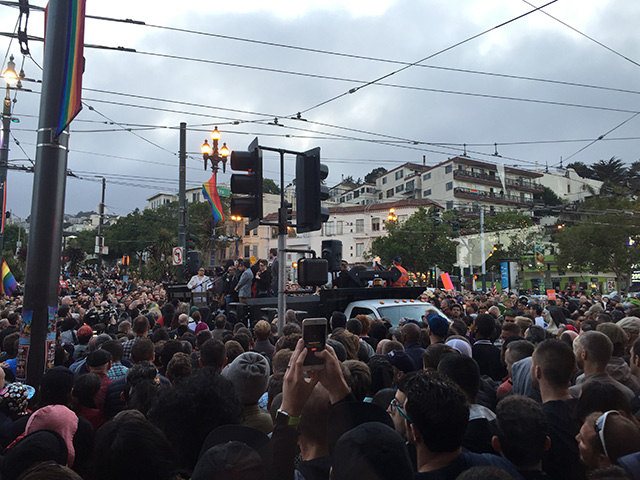 Sister Roma of the Sisters of Perpetual Indulgence, shared Kat's shock, telling SFist that “I woke up this morning and, like the rest of the world, I watched in horror as the story unveiled. I’m devastated, I’m heartbroken, I’m shocked, I’m disappointed, I’m angry."

"But this turnout right here, right now in the Castro, this is what our community is about. And it will take more than one gunman or a million gunmen to take our community down. This is who we are. We are a community of love.”

Speaking at the event, Campos said that “It is not shocking to me that the worst mass shooting in the history of this country would target the queer community. And it is not shocking to me that it’s not just the queer community that’s being targeted but also the Latino community. One of the things that my queer Latino brothers and sisters have said to me is ‘David, make sure the Latino community is not forgotten in all of this.”

However, the first speaker, president of the Latino Democratic Club Lito Sandoval, suggested that Latinos had been initially overlooked by rally organizers, saying “We’re here because we asked to be here, not because we were invited." 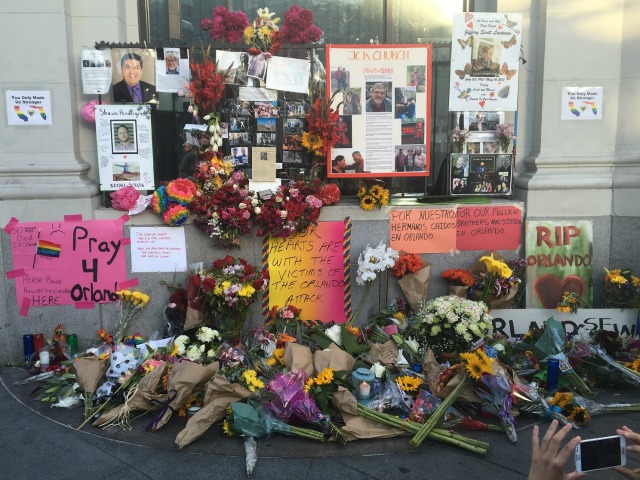 “My breaking heart joins your breaking heart as we search to find a way to dispel the hatred that was the cause of last night’s tragedy,” state Sen. Mark Leno said to the crowd.

“Violence does not occur in a vacuum. It occurs in a context, a social and political context.”

Interim San Francisco Police Chief Toney Chaplin, speaking to the crowd, called for stricter gun control laws, saying that "The NRA is a powerful group, but I am staring at a more powerful group."

“Get out there and go show your support for folks. We need to get this legislation in place to change the gun laws in this country." 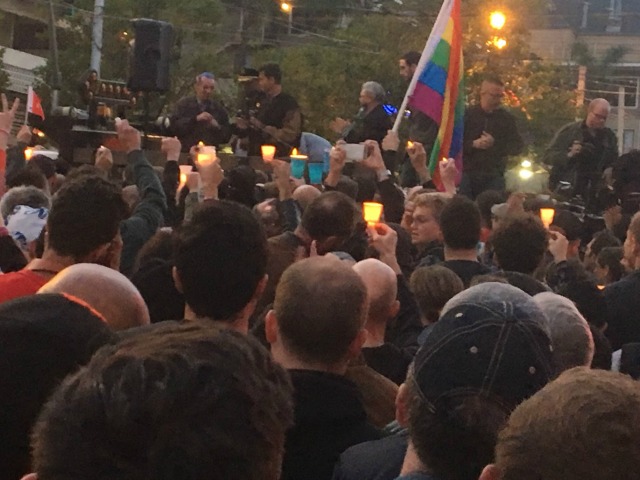 Addressing the crowd, Wiener said that “Two diseases that afflict his country came together and murdered 50 of our brothers and sisters."

"The disease of anti-LGBT violence that has been in our country for many, many years, from our kids who are getting bullied to people being harassed and attacked on the streets, to our transgender brothers and sisters being murdered in their own communities, and now this mass shooting. The other disease is the disease of guns, and a country that is awash with guns whose only purpose is to kill other people.”

As the event progressed, "A crowd chant of 'Where’s the mayor?' began from the back" of the crowd "and grew louder and louder until Mayor Ed Lee himself took the stage and attempted to address the crowd — only to be immediately booed," Mission Local reports.

According to a comment posted to the above video, one rally participant "was so disgusted by the immaturity of this response. I disagree with plenty of Ed Lee's policies, but the man showed up."

Former state Assembly member Tom Ammiano, also a speaker, had harsh words for what he described as “laissez-faire homophobia” and the National Rifle Association.

“NRA? ‘National Real Assholes’. Is that a gun in your pocket? 'Cause I'm not happy to see you."”

“You know, I’m old, I’m queer, I’m weary and I’m full of gay blood,” he said. “But we are going to fight back and continue, and continue and continue.”

Kukura has provided stage directions for what came next:

One commenter on our video from the event also noted that Ammiano "made a big show of kissing Ed Lee and the chief of police--to piss off the homophobes, obviously, but I think it also made a great point that in San Francisco both men laughed and happily kissed him back."

After the SF Gay Men's Chorus sang three songs ("Singing For Our Lives," "We Shall Overcome," and "An Irish Blessing"), rally-goers marched to San Francisco's City Hall, which was lit in the colors of the rainbow Pride flag.

The candlelight vigil honoring victims of the #OrlandoShooting has turned into a march to San Francisco City Hall. pic.twitter.com/8ySbw3GCMJ 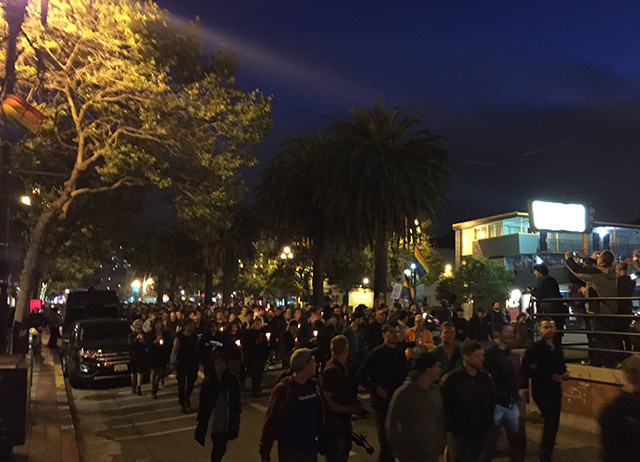 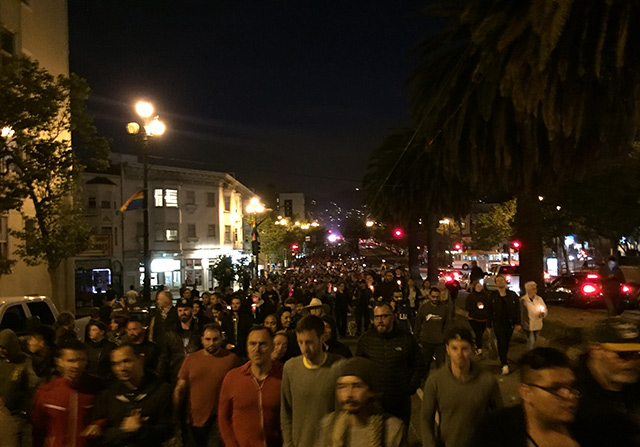 One at City Hall, the group of thousands again sang "We Shall Overcome," as speakers began to read a list of the names of those confirmed as dead in the attack. 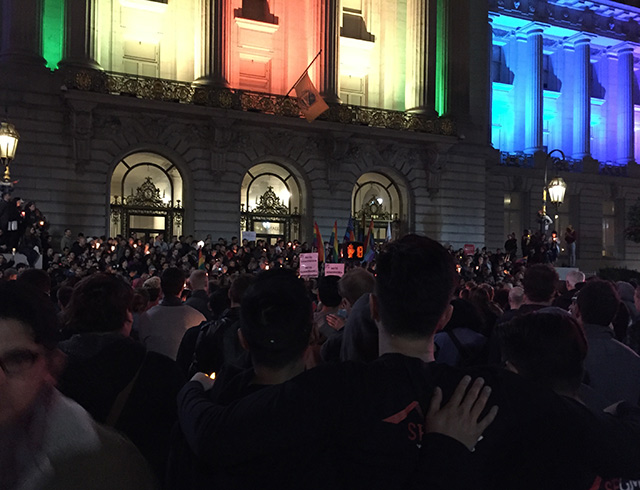 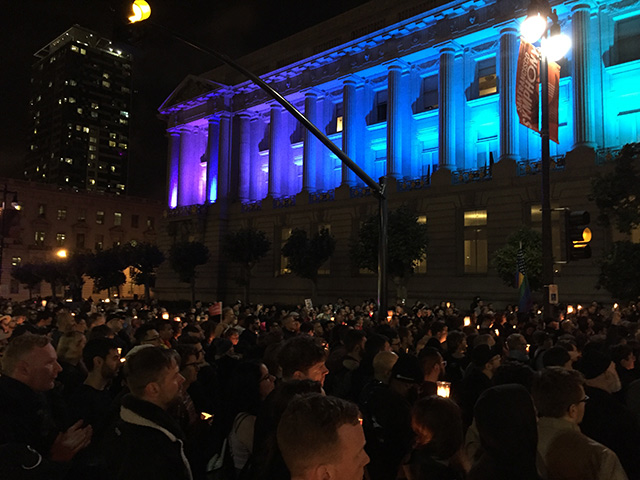 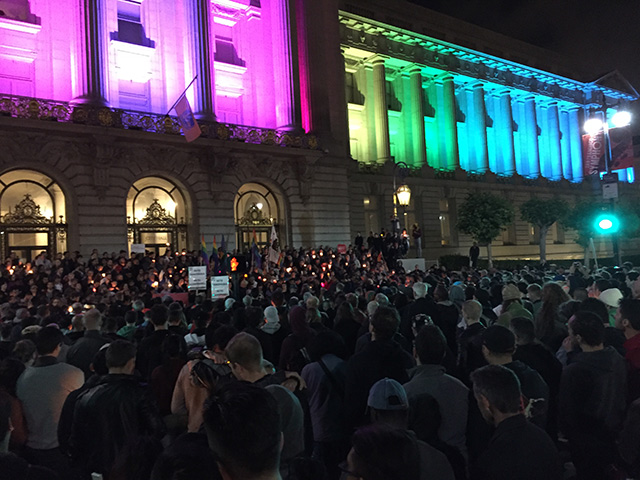 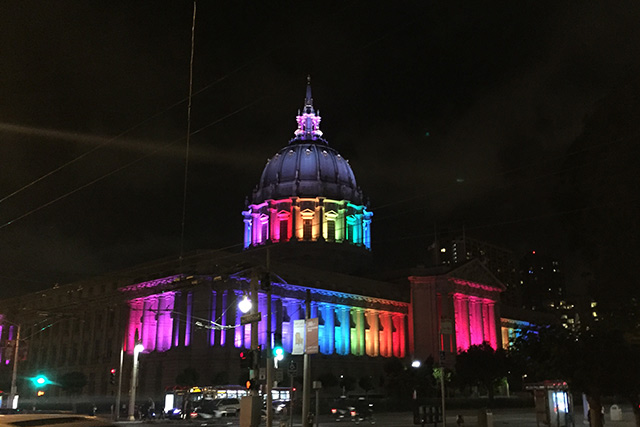 —
As Many As 10,000 Attend Castro Rally, March To City Hall In Honor Of Orlando Shooting Victims
Share this