After eight years in the pipeline, changes first petitioned for in 2008 are finally due to arrive on the notoriously dangerous stretch of Masonic Avenue from Geary to Fell. Those are, most notably, the addition of raised bike lanes and the subtraction of parking  167 spaces of it according to the SFMTA. Also to be added: new bus bulb-outs, trees, and a plaza at Geary and Masonic 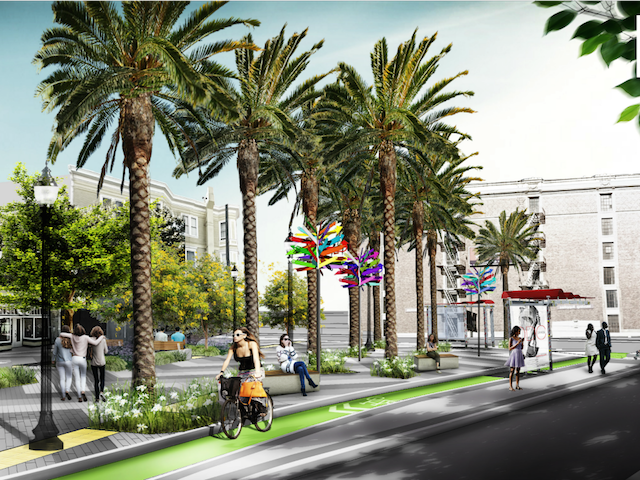 The project will break ground in June according to Hoodline and work will last for 18 months.

Part of the much-vaunted Vision Zero campaign to eliminate traffic fatalities, the Masonic streetscaping project takes as its mandate the 113 traffic collisions on Masonic between Fell and Geary that occurred between 2009. 14 involved pedestrians, 24 involved bicycles, and two resulted in deaths.

"This is really a reboot of Masonic," Director of SFMTA's Sustainable Streets Tom Maguire tells Hoodline. "Currently, it's a mini-freeway. It's an arterial road, but it doesn't currently reflect the urban environment it runs through, and it doesn't reflect the values and priorities of the community around it."

The project will cost $26.1 million to be paid for mostly by the SFMTA ($16.8 million) through money from revenue bonds and also by Public Works ($700,000) and the Public Utilities Commission ($8.6 million). An open house to fete the plan and ask questions will take place tonight at SF Day School.

Dear Rain, What hospital were you born in? When did your family arrive in SF? Signed, KB I'm a first generation San Franciscan, born at San Francisco General, in 1970. My family's ties

A perceived pattern of excessive overtime pay to BART employees has a least one state senator asking questions, and has forced officials within the transit agency to launch an internal probe into the