This year’s Etiquette Week coincides with Bay to Breakers, our local tradition with perhaps the least dignity or protocol of any event in the city. The zany magic of Sunday’s 7.46-mile costumed footrace is an amusing annual San Francisco treasure, but Bay to Breakers is also dubious — even compared to Gay Pride or 4/20 — for displays of loutish and ignorant behavior. There is so much behaving badly at Bay to Breakers that Stanley Roberts could fill a three-hour “People Behaving Badly” marathon on KRON 4 Sunday night  but he is, after all, only one man.

We advise that you do Bay to Breakers like a pro, so you can blend in with the Salmon, the I Dream of Jeannie Jeannies, and a lot of cute and inspiring people whom you’ll be delighted you got out early on a Sunday morning and get to know. 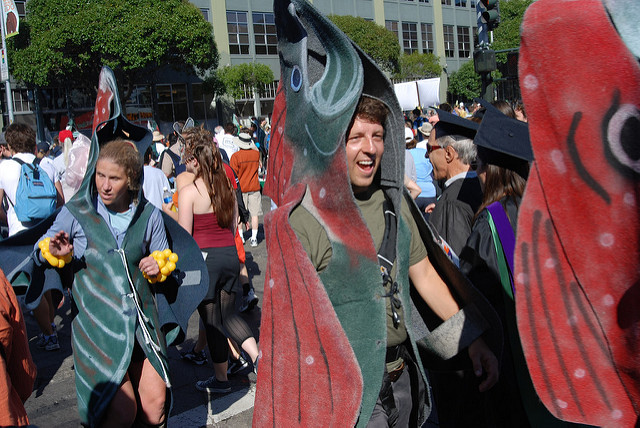 Wear a Costume
Unless you think you can run Bay to Breakers in 45 minutes or less, you should be wearing a silly costume out there. You’ll feel a little out of place if you’re not dressed up, and it is the Bay to Breakers custom.

Wear Clothing, Or If Not Get Creative With Your Nudity
Bay to Breakers does indeed have a cult of naked runners. But that this practice has become passé, employed mostly anymore by the grandfatherly-looking segment. You can expose yourself creatively, but the “all naked with sneakers and tube socks” look is frankly quite fug. Particularly so when combined with a fanny pack.

Register For The Race
Look how cute those registration bibs are on these two! Sure, Bay to Breakers is notorious for its lack of enforcing that you bought the registration bib. And Jay did note last year that Hayes Hill is the optimal place to crash. But do adult up, chip in on the street closure fees, the porta-potties, medical staffing, and the SFPD coverage necessary to make this Bay to Breakers mayhem possible. Online registration is closed, but you can register in person at the Zappos.com Bay to Breakers Expo Friday and Saturday.

Feign Respect For The "Alcohol Ban"
Fun Fact: Alcohol is technically banned from Bay to Breakers according to the race FAQs! But of course many of you will be drinking alcohol, and hopefully using our Bay to Breakers Liquor Store Map. At least be diplomatic, conceal your booze properly, and drink responsibly. Race volunteers and law enforcement will already have enough on their plate. 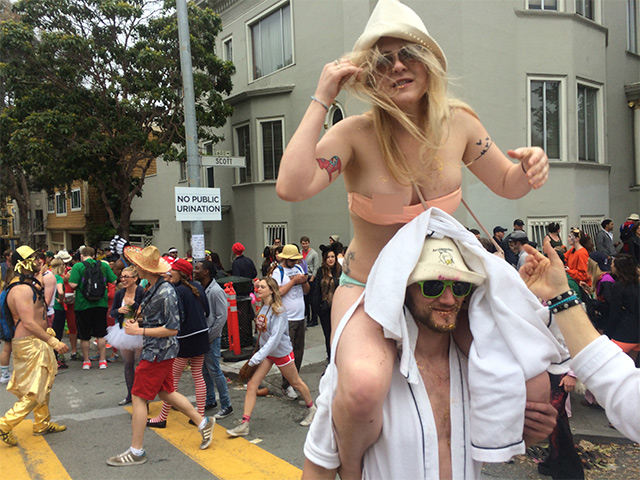 Use The Porta-Potties
This really ought to go without saying, but public urination has been a problem for Bay to Breakers in years past. There are cadres of porta-potties every mile or so along the race course, please respect the neighborhoods and use them.

Get To The Start Line By 8 a.m.
Shoot for 7:30, actually, so you’re on time for the 8 a.m. start! (You may want to bring tortillas.) This race starts early Sunday, and they’ll start tearing down the official Start Line if you straggle past 8:45. 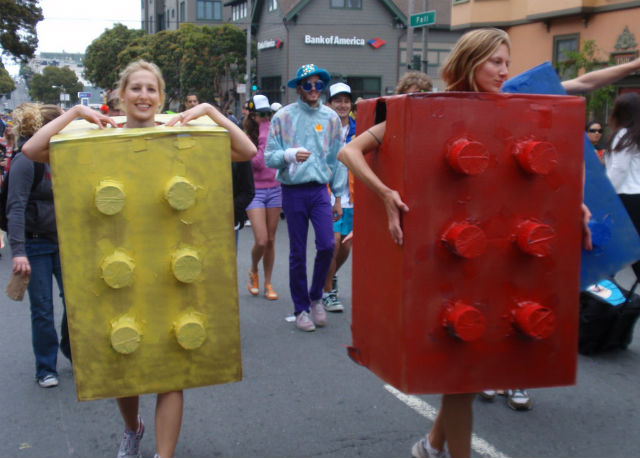 Be Patient, Don’t Push
Just accept that the race course will be very crowded during the first leg on Howard Street, and ridiculously mobbed when you’re on Hayes Hill. You cannot expect enough elbow room to do any good freeform running until you get to Golden Gate Park, that’s just how this race flows. There’s no sense stressing over your speed or race time; you’ll miss much of the good times that make this race so special.

No Wheeled Objects Or Floats
Newer San Franciscans may not remember the popular old Bay To Breakers tradition of wheeled floats and mobile bars, often equipped with kegs. This all sounds great, but the proprietors were terrible at cleaning up after themselves. Thus, any wheeled contraptions are justly banned.

Realize that this is the 105th annual running of the Bay to Breakers Race, so it’s an event with history, customs, and tradition. You can be still irreverent or even intoxicated while also honoring custom and maintaining decorum. After all, Bay to Breakers is a blast and we sometimes need to lift our spirits lifted after that earthquake that happened 110 years ago.

Related: Etiquette Week: How To Be Drunk

Facebook CEO Mark Zuckerberg has announced plans to meet with conservative leaders to address allegations that his website's Trending Topics section suppresses conservative news and news outlets. Before that, it seems Zuck will

The above video from ABC 7's chopper shows some more great glimpses of humpback whales inside the Golden Gate  how many there are, or if these are just the same gang people have

—
Etiquette Week: How To Do Bay To Breakers
Share this