Downtown slice spot Blondie's Pizza was shut down Monday by the Health Department, with the Chronicle reporting that inspectors cited "an imminent health issue" as the reason for the closure. Blondie's, located on Powell Street right next to the cable car turnaround, is a (sort of) popular spot for tourists just looking to grab a slice. However, it seems the location is even more popular with cockroaches than tourists.

The SF Health Department Public Information Officer Nancy Sarieh told the paper that the restaurant's permit was suspended upon discovery of a "severe cockroach infestation." Gross.

Hoodline called the pizza joint, and spoke with a man named Steven who told the publication of the efforts to clean things up. "We're really doing our best; we're really hard workers," Steven explained. "We're really trying to open at 100 percent and correct everything. I want our customers to come back."

According to the inspector who spoke with the Chron, as long as Blondie's staff takes care of all the issues cited, they could reopen as soon as within a couple of days. At the time of closure, Blondie's health score was 74 — maybe keep that in mind the next time you see a restaurant's score dip into the 70s. 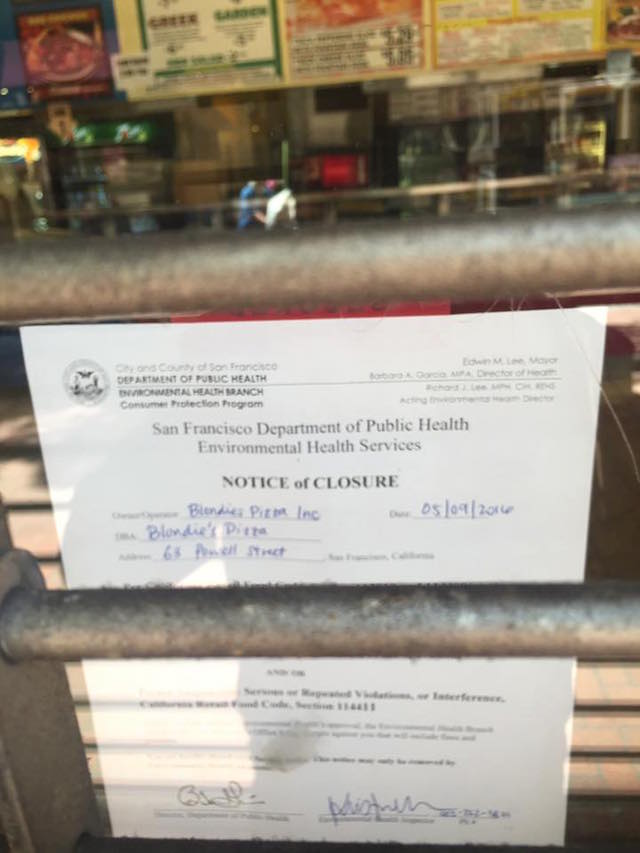 Related: Health Department In Violation Of Own Standards As Restaurant Inspections Lapse

A super blurry photo of the notice of closure via reddit.

A man who was allegedly making a fuss on BART as it traveled through San Francisco has been detained this morning, after his disturbing behavior delayed trains and sent police to the scene.