It's time again for something we haven't done in a couple years here at SFist, and that's Etiquette Week  in which SFist's editors dole out some prescriptive advice for how to behave in this city we all share in order not to overly annoy, offend, or otherwise piss off your fellow citizens. Despite what some may believe, there are rules for better living, as Emily Post knew well, and you'd be foolish to dismiss these out of hand as somehow stuffy or anachronistic. Being a jerk in public is never a good look, and even in these modern times when we don't necessarily care about what fork you're supposed to pick up first, there are many arenas where not being that guy might win you more than just new friends and quiet affirmation.

We begin this Etiquette Week with a topic dear to me: How to ride a bus, specifically a Muni bus. (And most of these guidelines apply equally to street cars and Muni Metro cars as well.)

Boarding and Exiting
While all Muni buses now encourage you to board at the back, bus riders in SF will naturally spread themselves between the boarding doors, especially in the case of double-long buses on the 38 line, etc. You'll find the elderly and disabled using the front door in order to more easily access seating at the front, and in the case of several people doing this at once, you may want to head to the back door and wait your turn to squeeze on, rather than get too aggressive with your elders at the front.

For those unaware of how the back doors operate, it is customary for San Franciscans to shout, "Step down!" at unwitting newcomers and tourists and take great pleasure doing this. It would of course be kinder to quietly instruct such a person, assuming they know the language, or demonstrate with your own foot stepping on the lower step to open the door for them. Note that there are also buses that do not have the step-down door opening function, but have yellow-taped stripes down their center that, when touched, when the green light is illuminated above them, will open. It is also kind to demonstrate this to the uninitiated as well.

Another note on exiting: When you are two blocks from your stop in a tightly packed bus and relatively near the door, you do not have to climb over the two people in your way to position yourself ahead of time. Often those people are planning to get off at your stop too, and they will sometimes tell you so if you're making the squeeze more difficult for no reason.

Backpacks
It is neither appropriate nor polite to continue wearing your backpack on your back when you step onto a crowded bus or any other public transportation. Everyone who does this can and should be publicly shamed so that they remember the feeling of utter ignorance about the ways of urban life, and they correct their behavior in the future.

Backpacks of all sizes both take up precious space your fellow commuters could be occupying, and also have a tendency to thwack or even violently knock other people when unwitting backpack-wearers turn their bodies even slightly in crowded situations, forgetting how much lateral space the appendage on their back is now taking up. This is very wrong.

Backpacks should always be removed the moment you step onto a bus, and preferably in the moments before you board. Hold the backpack in front of you as you find a spot to sit or stand, and then stow the backpack on your lap or at your feet, keeping a hand on it if you're afraid of thieves. And speaking of thieves, you are actually leaving yourself more open to petty theft with the backpack on your back, where a thief could quickly unzip your laptop pouch, snatch your computer, and bolt out a door while your back is still turned.

Dealing With Crowded Situations
If you are primarily a bus commuter, you should know by now a few basic rules for rush hours, but for everyone else, let's review.

When you board the bus at the front, it is best to remain aware of your surroundings and continue to squeeze toward the back of the bus as space becomes available and as others continue to board. Your fellow commuters are not there to make your life more difficult, they are just trying to get home, or to work, like you are. Be kind and work together to make room for each other.

Likewise, if you board at the back, you should move as far back as you can at crowded times, especially if you're planning to be riding for many stops. And, if you're trapped right next to the back door on a jam-packed 5-Fulton at 5:30 p.m., it is your duty to clear the way and step off the bus at each stop so others can get off. If you are fully invested in a game of Candy Crush, you will not be able to do this. 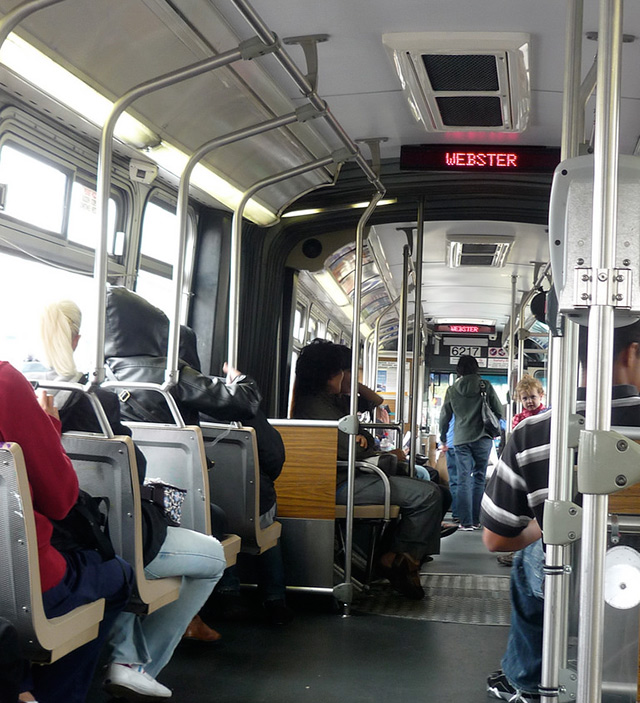 Talking On Your Phone
There is a special place in hell for people who spend their entire commutes on any mode of public transit loudly having a personal phone conversation that everyone in a ten-foot radius is forced to hear. Nobody needs that.

Receiving a quick phone call about logistics, or telling someone you're on the way, is perfectly acceptable, but most of that should be able to be accomplished by text, no?

Giving Up Your Seat
Yes, federal law requires that seats be given up for the disabled and the elderly, and the rules of etiquette demand that this be done graciously and without a second thought.

Also, if you a see person entranced by a game on their phone, or reading their Kindle and failing to notice an elderly or pregnant lady standing and strap-hanging in front of them, you may nudge that person on the shoulder or give them a wave in their field of vision and say, "Perhaps you would give up your seat?" The standing person may not want or need the seat, but don't make them have to ask.

No Audible Music, No Eating, No Drinking
These are just straight-up, basic Muni rules that you can be cited for violating, but they could use repeating.

Fare Evasion
It is up to the SFMTA to enforce against fare evaders, and when you see someone board at the back of the bus and not tag their Clipper Card, it is not necessarily the case that they are breaking the law  they could very well have a paper transfer on them with no one to show it to. Being a finger-wagger, vocalizing your disapproval, or casting judge-y glances in the direction of such people is not going to get you anywhere, and you could easily turn out to be wrong in your assumption that they've done anything wrong.

Also, when the Clipper reader gives off one of those bad beeps for "low funds" or "insufficient fare," that is shame enough.

Well, it's here. We've finally recovered from the sturm und drang that was Super Bowl 50, and now San Francisco's City Controller has figured out how much it cost us and how much

After a year at its new, Frank Gehry-designed headquarters, Facebook looks to be making their house a home. As Curbed reports on building permits sleuthed by Buildzoom, the company, which often leaves areas

—
Etiquette Week: How To Ride A Muni Bus
Share this