In her essay "Slouching Toward Bethlehem," an investigation of life on Haight Street published in 1968, Joan Didion referred to a "center" that would not hold. While she was naming something more metaphysical, on today's Haight Street, that center might be the massive car transit corridor. And at least according to one plan— which is, for now, more of a website with some interesting renderings — it isn't holding very well when it comes to the street's culture.

Revolutionize Haight is the name of the proposal from Grand San Francisco, a sort of "person or group with a website and a dream" operation from Reed Martin. Martin, maybe you recall, was on the ballot for mayor last year, and Ballotpedia tells us he received 2.4 percent of the popular vote, or 4,612 votes. 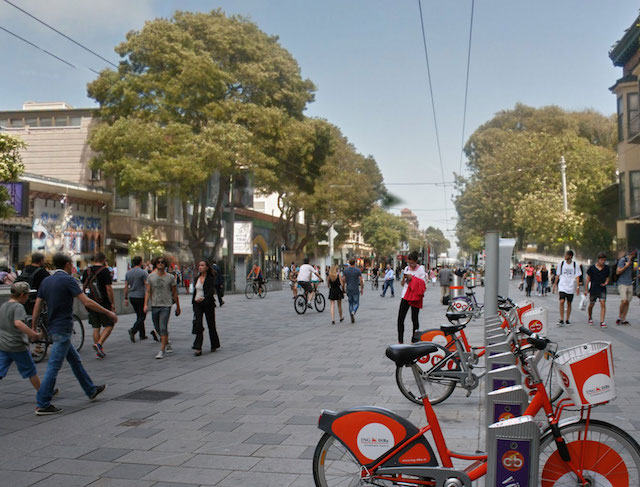 Anyway, the site is rather sleek and the renderings are fun even if this is perhaps a bit of a pie in the sky type of a thing. But, you know, it's not so radically different than the transformation undertaken in the Castro — though this appears to have absolutely zero parking, as is the idea.

As Martin writes in a FAQ on the site, he's not alone in his hopes, which do deviate from the city's official plans.

"We weren't happy with what the city was proposing, so we've decided to create our own," Martin says. "Everyone who has contributed to this vision lives or works in this neighborhood. Many of us aren't thrilled with a lot of the direction we're seeing in architecture and urban design in San Francisco, and we wanted to find a way to let Haight Street shine."

Related: Mission Street Changes Have Drivers Seeing Red, Could Be Revisited Before They're Finished

Surveillance cameras outside of Valencia Street theater Stage Werx captured a distressing scene this past Friday, wherein a thief cut the lock off a bike with some sort of power tool — making a

Furries, they're just like us — at least when it comes to snapping tourist photos, that is. According to the person who took the photo, the above scene apparently went down yesterday at Alamo

—
Fanciful Renderings Imagine A Haight Street Without Cars
Share this