There would be no Victorian furnishings in her home, Gail Baugh decreed 13 years ago when she and her husband Jim Warshell purchased the Fisk House, a late-19th-century gem at Hayes and Buchanan, for just under $1 million.

So much for that. Now, the home of the 68-year old Baugh, a former Macy's buyer, textiles expert, and part-time SF State lecturer, is a shining example of high-Victorian restoration, profiled everywhere from Curbed to the Wall Street Journal. 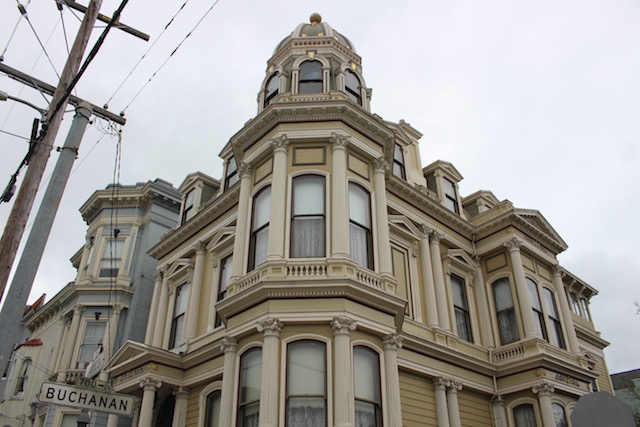 In part, Baugh blames — or thanks — Warshell, 64, a retired merchandising vice president for Macy’s. "I kept going to sales and buying things," he says. Warshell himself started purchasing and restoring old houses in his twenties in Brooklyn, and he hasn't stopped since. For Warshell, every restoration is "a healing — the house thanks you." That is to say it can be restorative in every sense of the word.

But even after years of careful, nearly archeological work — tiles matched, marble rediscovered, wood refinished — the Fisk house is not preserved in amber. First off, don't bother asking Baugh or Warshell where you can or can't sit — "everything here is meant to be used and lived with!" Warshell says. "We try to take our passion for preservation to expand it from 'everything's a time warp frozen in Victoriana.'"

And don't waste a second asking Baugh if the two are finished with the place. "You're never finished," she laughs. 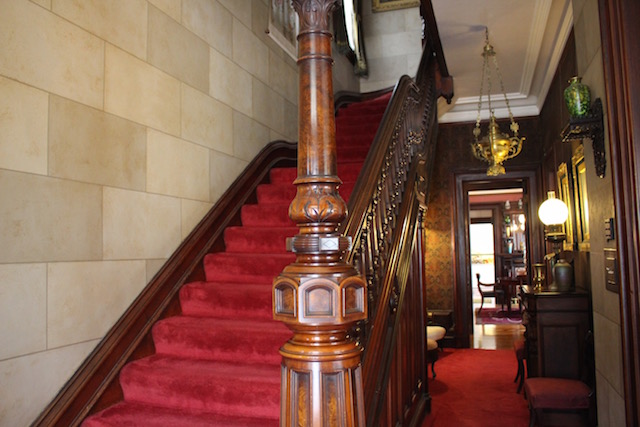 Another party to thank in all this: The Victorian Alliance of San Francisco, "the City’s oldest all-volunteer, not-for-profit organization committed to the restoration and preservation of historically significant structures." In contrast to San Francisco Heritage, which has a professional staff and a headquarters, the Haas-Lilienthal House in Pacific Heights, the Alliance, founded in 1973, is about homeownership as opposed to institutions and public policies.

As Warshell adds, "The whole idea of real preservation is from the point of view of individuals in these houses, who are passionate about fixing and preserving them and keeping them from the wrecker's ball." In fact, that ball narrowly missed — mandated urban renewal in the 1950's and 60's claimed many such livable homes, leveled in favor of government-sponsored housing projects in the nearby Western Addition.

At first, Baugh and Warshell drew on the Alliance's catalogue of contractors and experts to return their address to its former glory. The home was commissioned in 1884 by Asa Fisk, a moneylender from New England, and according to a summary adapted by Jason Allen-Rouman from The Storied houses of Alamo Square by Joseph Pecora, the house, " is notable for its unique combination of stylistic elements. It has a Second Empire masnard roof, Italianate body, classical columns, and a Queen Anne domed tower." Also hard to miss, once inside, is the "rare Cuban mahogany used lavishly throughout the interior."

But, in some ways, that was far less than they might have done — and now there's far less to do. "You look at the ecology of this house," Warshell says, "and we don't use a lot of electricity." Credit here also goes to solar panels, and the couple is hoping to work with the PUC to install passive gray water retention. "Consider the basics of living in a house like this, with high ceilings — they keep it cool, no air conditioning necessary. There are so many things about the ecology of if that are good. And the less you're tearing out, the less goes into landfill." 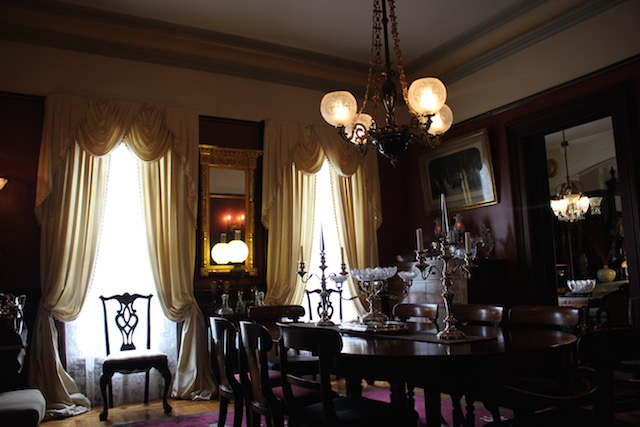 In this sense, and additionally in the sense that the Victorian Alliance and its nearly 250 members, not all of whom own Victorian homes, are peerless aesthetes — Baugh, Warshell, and their kindred spirits might well be eco-hipsters by another another name. Of course, not in any withering sense, but in the sense that each item of their home is "vintage" or "curated" or, as some say, "reclaimed."

"It is reclaimed," Baugh assented when I suggested that word. 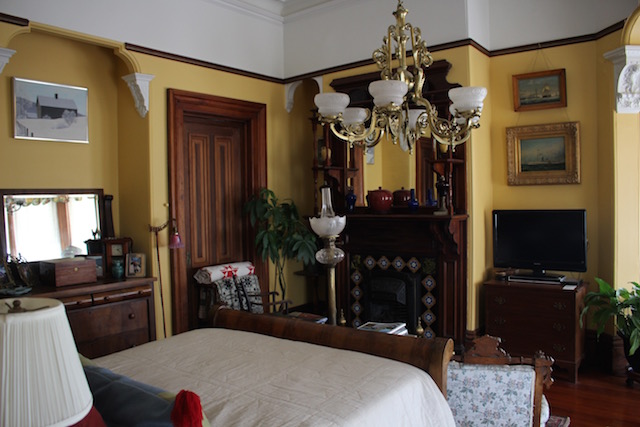 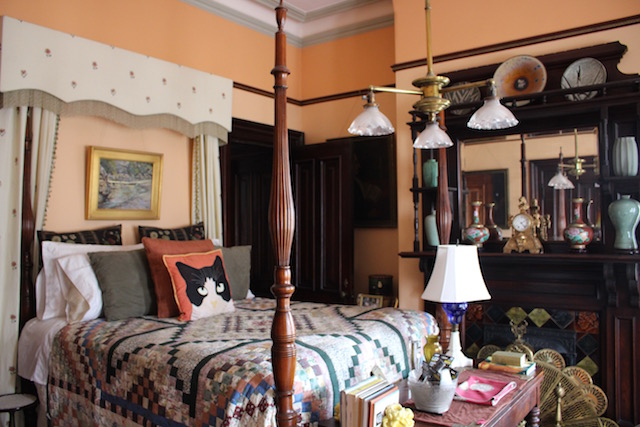 Not just caretakers of their home, Baugh and Warshell have demonstrated an investment in their neighborhood and beyond. "We embrace and welcome all the new people," Warshell says, "at one point 13 years ago, we were the new people. Whatever we're able to do towards that goal is really the satisfaction we get about living here, being good stewards of this particular house, but also being engaged with our community, keeping it diverse, helping in how it develops, how it deals with its problems, and how it evolves in a more positive way." 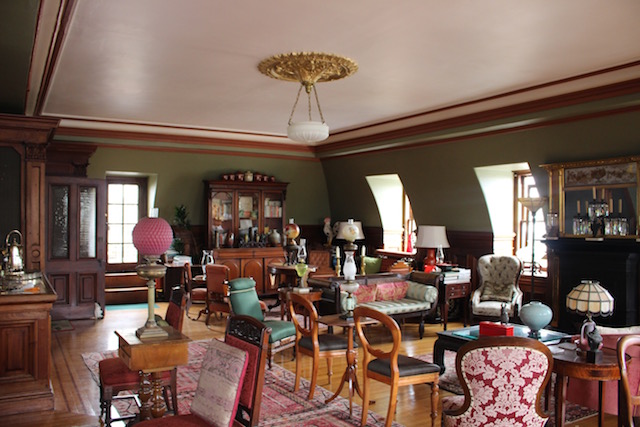 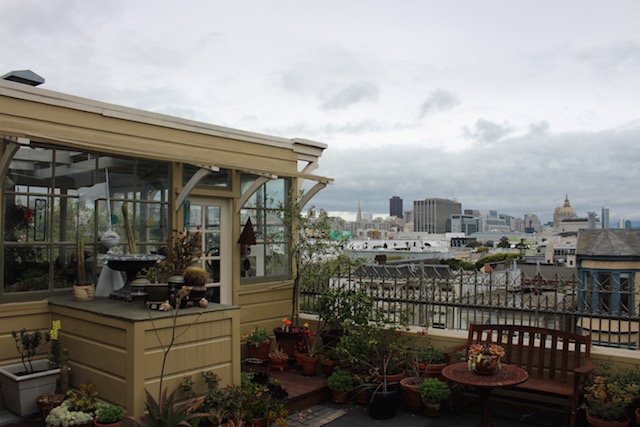 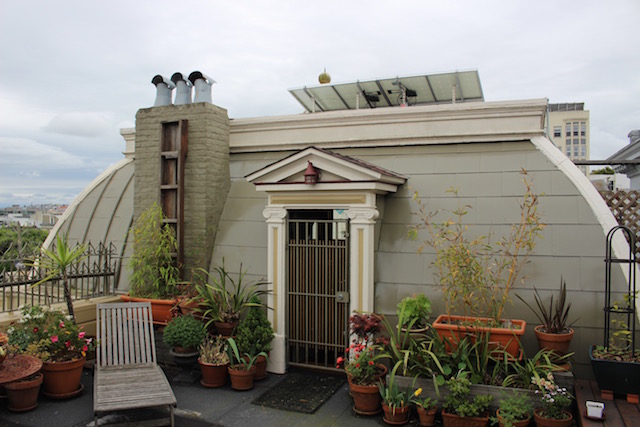 "It can still feel very exclusive — exclusionary," Baugh admits of preservation. But, she adds, her central question is, "How do we make the house contribute back to the community?" Last night, for example, as it has for the last three years, the Hayes Valley Neighborhood Association's transportation and planning committee met in the spacious top floor ballroom. Baugh, naturally, is the association's president.

Now, the ballroom wouldn't have had chairs originally — just plenty of room for dancing and music, the couple explains. Perhaps consider that a small concession to making the Fisk house a part of the community. 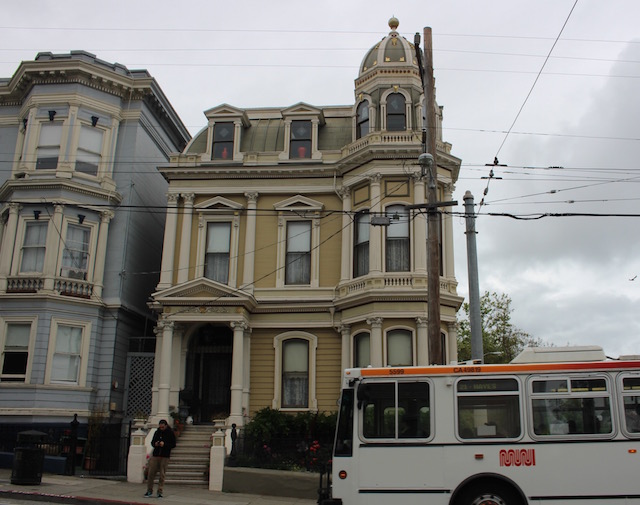 Related: So Many Victorian Homes Are Being Modernized That This Traditional Interiors Restoration Business Had To Close

When officers with the San Francisco Police Department shot a homeless man who allegedly refused to drop a kitchen knife last week, officers told members of the community concerned over discrepancies between police

When you look around your home for the ideal weapon, is your first thought items from your freezer? If you said "no," then congratulations, you are not being sought by the San Francisco

—
Inside The Fisk House, A Victorian Alliance Restoration That Proves History Buffs Are Hipsters
Share this