Finally, two weeks after we thought they'd announce it and after that fake-out lineup, we get the real-deal Outside Lands 2016 lineup. And yes, a number of acts from the "projected" lineup are indeed really playing, including headliners Radiohead and LCD Soundsystem, as well as Lana Del Rey, 80's nostalgia band Duran Duran, and one surprise elder statesman  as there always is  and this year it's Lionel Richie.

And what's this?? The Muppets' Dr. Teeth and the Electric Mayhem?! WHHAAAATTT? Yes, and they get the honor of doing the now annual video promo of the lineup, as seen above.

Also, the day-to-day lineups are out, with LCD Soundsystem headlining Friday, Radiohead on Saturday, and Mr. Richie getting the traditional older generation slot on Sunday (with Lana Del Rey likely playing for the kids in Hellman Hollow opposite him).

And, yes, three-day passes are going for $355 this year, and will go on sale Thursday, April 7, starting at 10 a.m. PT. A brief "eager beaver" sale happened last week, but that was just a $30 discount.

The festival, with all the bougie wine and craft beer and fine foodstuffs that it brings with it, happens August 5 to 7 in San Francisco's Golden Gate Park. 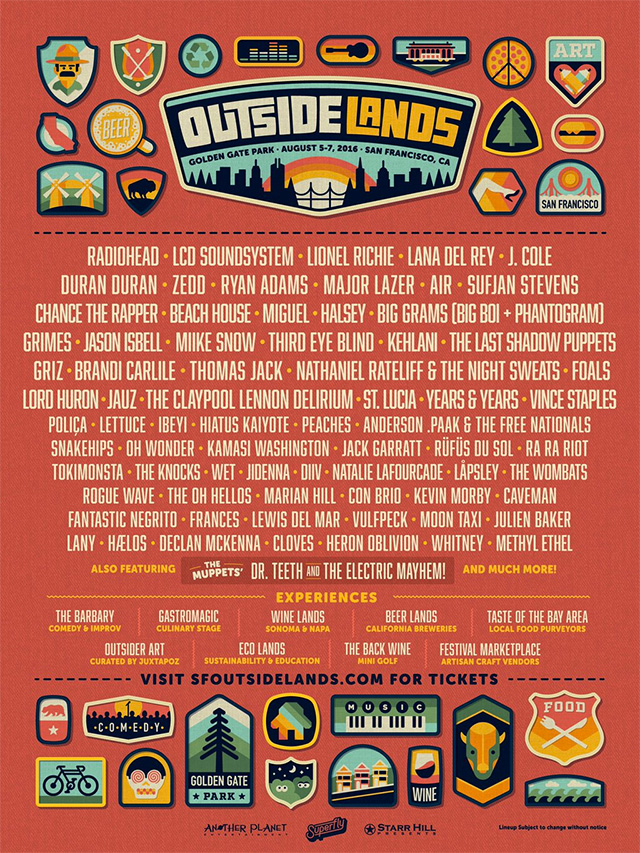 Related: 17 Signs You're Too Old For Music Festivals
12 Items Not To Bring To Outside Lands

This, dear readers, is not a review. Rather, it is an exhortation: Go see Z Space's new comedy by playwright Peter Sinn Nachtrieb starring the arrestingly funny Danny Scheie. Titled A House Tour

—
Outside Lands 2016 Lineup Does Indeed Include Radiohead & LCD Soundsystem, Also Lionel Richie And The Muppets!
Share this