Last summer, the local media caught wind of a 31-year-old business school grad who'd built an ersatz apartment complex out of 11 shipping containers that were all in an Oakland warehouse somewhere, for which he was charging $1,000 a month. He called it "Containertopia," I called it depressing AF, and we agreed to disagree. Fast forward to this week, when I get tipped off that someone is renting a lone shipping container in the Bayview, with shared bathroom access somewhere on the property, for the comparative steal of $600/month. Or, if you want to share this bare, unheated metal box in one of SF's less desirable neighborhoods with an unfussy boyfriend or girlfriend, it will run you $400/month apiece.

The poster refers to the shipping container as a possible "Studio/House" and suggests one could "Work or Sleep" there in the headline. This person then hedges a bit about the situation's livability in the text, saying it's a "Great shipping container to Work on art or Nap in." I don't know about you but when a person who's not from the 18th Century randomly capitalizes words within a sentence, I worry. Don't you? 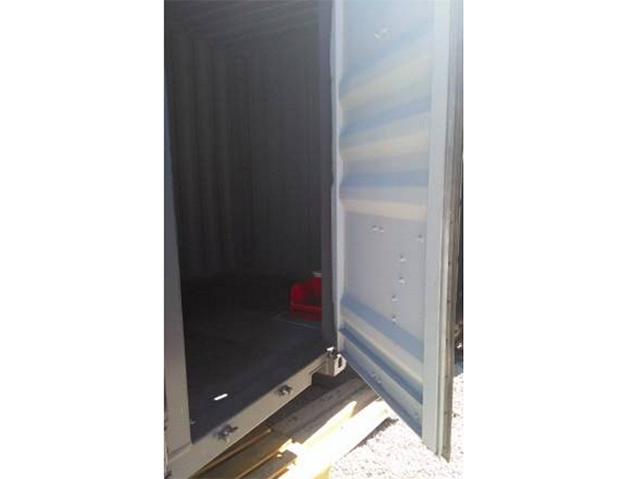 The specifics are few, apart from the mention of the bathroom, which apparently has a shower, and which is 15 feet away from the shipping container. Also, there is capital-E "Electricity Access," which I assume means you can run an extension cord to the house, or something.

Here, by the way, is the main image from the post, which is presumably the view when the doors to the metal box swing open?

So, sure, this could make for a swell artist's studio for one or two  especially economical for two, and easily hosed down if you happen to work in feces or spin art.

And the ad does mention something about this being in a "Gated & Secure Community," so there's that.

But if you are seriously thinking about making this shipping container your temporary to permanent home, please consider that this is not something that a person who is not being human-trafficked across an ocean should be doing. Does anybody remember that episode of The Wire? What if you got trapped inside and no one could hear your cries for help? It's also going to be really echo-y to the point of madness unless you really heavily pad those walls and carpet the floor.

Is it better than sleeping in a van or a box truck? Sure. But so is, like, a mild case of syphilis. Or moving back in with your mother.

This could be your new front door.

A lot went down this week in the world of San Francisco's food scene, and we did our part to hip you to the history of brunch, the best places to find soup

Cannabis entrepreneurship, an industry by and large dominated by white men as BuzzFeed discussed last month, got a huge boost from Whoopi Goldberg this week. The comedian and co-host of The View who