Known for its downtown office buildings from the towering 50 California to the Market Square/Twitter building, real estate investors the Shorenstein Organization received Planning Commission approval yesterday afternoon for their first residential project: 12 stories of development comprising 304 units on Jones Street and Golden Gate Avenue in a complex with an outcropping (and main address) at 1066 Market Street. The current site is a surface parking lot.

The project, Socketsite observes, would meet but not exceed the legal 12 percent affordability requirement, with 36 below-market-rate units. Those units must be made affordable to households earning 55 percent of the area median income, which is about $56,000 for families of four and $40,000 for individuals. 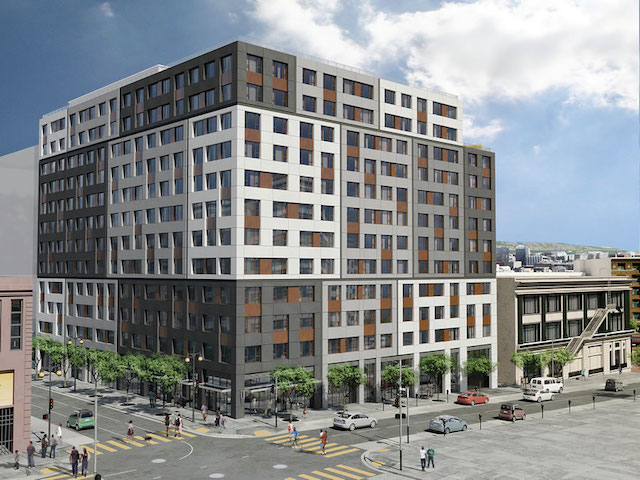 That's made the development a controversial one, the Chronicle writes. “Twelve percent affordable is simply not enough for any new development in the city at this point,” headmaster Michael Anderer of De Marillac Academy (a nearby school for local families, many of whom earn less than 30 percent of the area median income) told the paper.

As Tenderloin Neighborhood Development Corp. planning manager Alexandra Goldman put it, “Existing Tenderloin residents must share in the benefits... We can’t support a project with so few affordable units.”

Not all are opposed: Notably, Tenderloin Housing Clinic executive director Randy Shaw thinks that the new development is “unlikely to attract the gentry." The area hasn't been met with the Ellis Act Evictions and gentrification experienced by so much of San Francisco. In fact, as Shaw points out, the area has had just one new market-rate housing project in seven years.

Shorenstein purchased the property in the '60s as parking space for the Golden Gate Theatre, which the family-owned organization also possesses. Plans at 1066 Market call for an underground garage for 102 cars and 304 bikes. On the ground floor, plans indicate 4,500 square feet of retail space. Meanwhile, plans to built a 13-story building of 186 units next door at the temporary food market the Hall (1028 Market) are moving forward.

While 1066 Market was met with 5-to-2 approval, the project will likely be appealed to the Board of Supervisors. Also at issue is trailing legislation that could add more affordable units: Voters will see a ballot proposition boosting below-market-rate unit requirement from 12 to 25 percent. (And, not far from here but also in Jane Kim's District 6 at Mission and 5th, the 5M project won approval by reaching 40 percent affordability, though not all of it on site.) "We are willing to wait it out and let the government tell us where we need to be." Shorenstein's managing director Meg Spriggs told the Chronicle.“This will be the first project that the Shorenstein family has ever developed for residential, and they intend to hold onto it forever."

Related: Here's The Condo Building Coming To The Corner Of Market And Church

The FBI may face a new hurdle in their eager attempt to get around Apple's encryption technology and unlock the iPhone of one of the San Bernardino terrorists, and that would be Apple's

Hello, My Name Is Doris - Embarcadero Sally Field's first starring role in more than 20 years is a retooling of the romantic comedy formula that contains virtually no actual romance and gets