While many will contend that the very fact that Noah's has become a local institution is proof positive that San Franciscans are a provincial, taste-challenged bunch of heathens who wouldn't know a real bagel if it slapped them in the tuckus. Don't people know that any bagel that's been sitting around more than a couple of hours should be thrown immediately to the pigeons?! The bagel landscape around the Bay has, thankfully, broadened and massively improved in recent years, driven by the appetites of transplanted New Yorkers no doubt, and spurned by situations like this pop-up in 2014 that drew an around-the-block line, in the pouring rain. When SFist did this sorry list of the five "most adequate" bagels three years ago, we didn't yet have spots like Wise Sons Bagel, 20th Century Cafe, and Marla Bakery doing way above-average  some might even say stellar  work in the bagel department. So, we are back to updating our thoughts in this controversial arena, and to point bagel-starved former New Yorkers in the right direction  on both sides of the Bay.


1. Beauty's Bagel Shop
Hand-rolled, Montreal-style: That's the name of the game at Beauty's Bagel Shop. With seeds enough to stock a birdhouse, these bagels also draw long lines. But those move quickly, and you'll be rewarded with the wood-fired goods before you know it. Lots of cream cheese and filling options await, from the traditional to the tofu, and then there are the bagel sandwiches, which definitely stand out  . Yes, they're organic, and yes, those eggs are free-range. Do note they are closed on Mondays. — Caleb Pershan
3838 Telegraph Avenue, Oakland, between 38th and 39th Streets 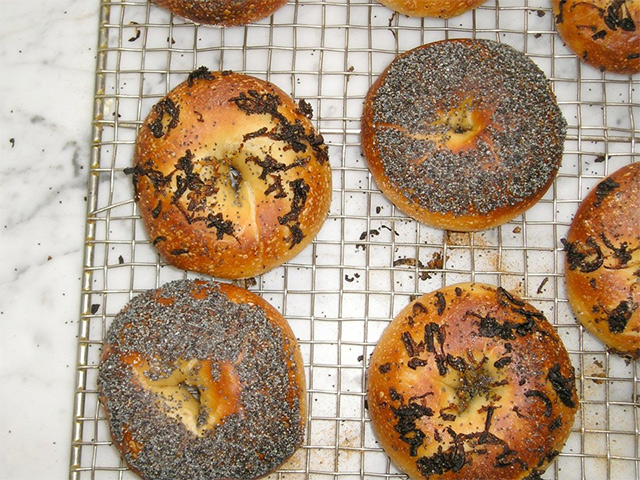 2. 20th Century Cafe
Pastry chef Michelle Polzine (formerly of Range) knows her way around proper European baking traditions, from her knishes and honey cakes to her proper, boiled and baked bagels, liberally crusted with poppy seeds, or onion, or just plain naked. The bagels are dark, yeasty, and chewy, with a hint of honey in the dough, and Polzine prefers to call them "San Francisco bagels" lest any purists try to call her out. Still, these are some delicious, fresh-from-oven wonders (baked twice daily!), and you owe it to yourself to have one the next time you're in Hayes Valley. — Jay Barmann
198 Gough Street at Oak 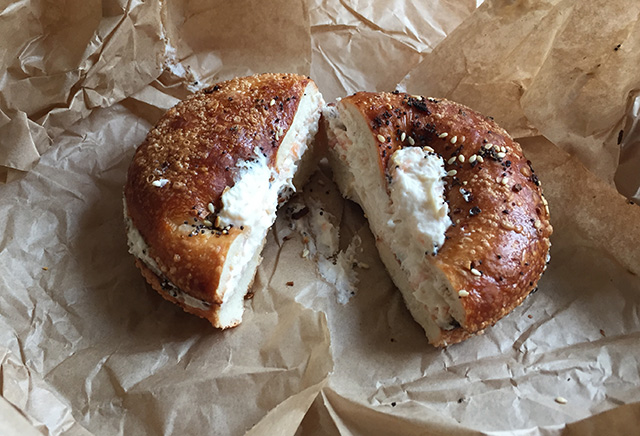 3. Wise Sons Bagel
The highly buzzed-about new bagel operation on the scene is from Wise Sons Deli guys Leo Beckerman and Evan Bloom. SFist tried out the bagels on opening day, and you know what? They're pretty damn good, and I recommend the egg sandwich. I have not been back to assess any change in quality in their first weeks of business, but that's only because I'm cutting back on carbs  but the Yelp consensus is so far mixed, with some complaining about the size of the bagels, some about the prices, but on average people say they taste pretty good. Are these bagels going to change your life or make New Yorkers stop ever craving an authentic taste of home? Probably not, but they are quite great by established SF standards, and only likely to improve as these guys master mass production.  Jay Barmann
1520 Fillmore Street near Geary 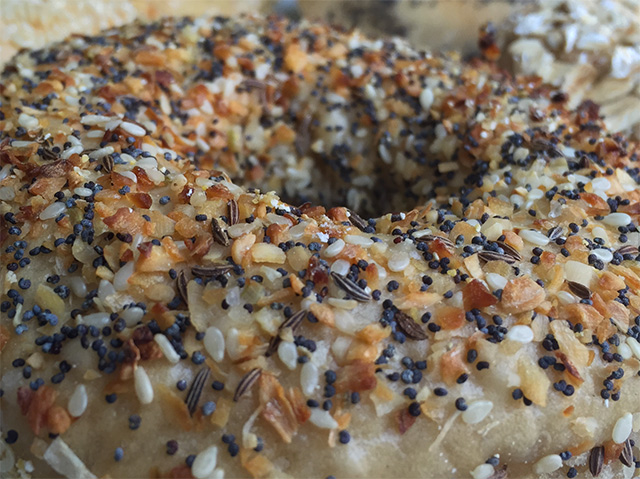 4. Authentic Bagel Co.
Though located in Oakland, Authentic Bagel Company's excellent bagels make their way all over the Bay Area wholesale-wise, and you'll find them getting toasted at Arlequin Cafe and Bi-Rite in SF, as well as Philz's Shattuck Avenue location in Berkeley. Brothers Jason and Mark Scott, a couple of Jewish kids from Rhode Island, stumbled upon a 100-year-old bagel recipe from their great-grandmother and built upon it using a sourdough starter to create their version of a San Francisco bagel by way of Rhode Island. The place has done quite well and sells what Serious Eats has named the Best Everything Bagel in the region, by G_d you could do worse.  Jay Barmann
463 2nd Street, Oakland 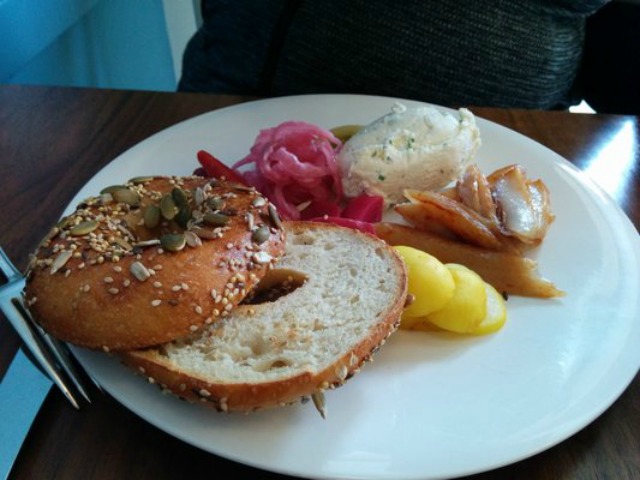 5. Marla Bakery
Every day, Marla Bakery staffers get up before the rest of us to make their bagels, which are available to all comers in increments as high as the half-dozen (they ask that you call in an order if you want more than that at any one time), and come in salted, sesame, poppy, or seeded (that's with sunflower, millet, flax, pepita, and sesame) varieties. Their chewy and just-dense-enough bagels can be ordered with their herbed farmer's cheese or lox spread, or you can go all out and get their bagel plate, which comes with cheese, a side of homemade pickles, and Marla's house-smoked trout. — Eve Batey
3619 Balboa Street, between 37th and 38th Avenues 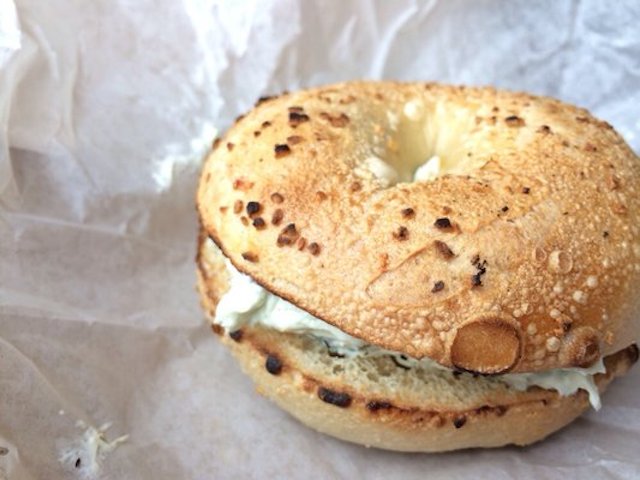 6. Katz Bagels
Boiled bagels at Katz, some might complain, are a bit compact. But classics like salt, garlic, and poppy seed are indeed super fresh boiled. Cream cheeses run the gamut, though I'll put in a plug for the chive. You'll also find numbered bagel sandwiches including good old bacon and egg. The cash-only establishment plays great jazz, has a nice bar slash counter to hang out on, and serves coffee. But you can also bring a bagel over to Stanza across the street, where there's better brew. Don't worry, they won't mind. — Caleb Pershan
3147 16th Street between Albion and Valencia Streets 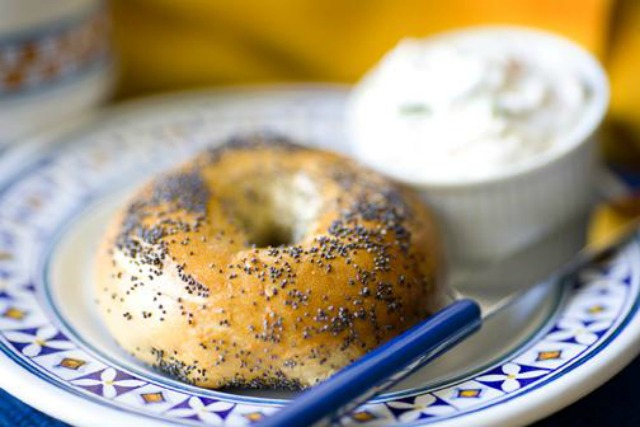 7. House of Bagels
This Richmond District bakery and storefront's been churning out "NY Style" bagels for 50 years, which has got to count for something, right? With a decidedly un-NY list of bagel flavors (Apple Ginger?) purists should note that HOB is also kosher-style, not kosher. But they're swift to assure you that they "carry NO pork or shellfish products of any kind." Casting aside those issues, how do they taste? Not too bad! Boiled and baked every day, as the good lord intended, if you stick with HOB's plain, poppy, or salt you'll get a firm, not-too-cakey bagel with a nice spring to it. Just as important, their staff is really, really nice. If only more people realized what HOB does, that the flavor of one's food can be dramatically enhanced by friendly service! — Eve Batey
5030 Geary Boulevard between 14th and 15th Avenues 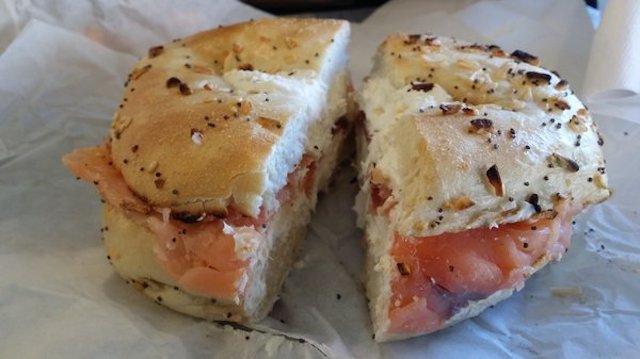 8. Izzy's Brooklyn Bagels
Keeping it kosher in Palo Alto is Izzy's, where they're doing Brooklyn-style bagels just like "back east." One of those places that people invoke as the best bagel in the Bay Area, it's certainly worth a visit for top-notch fare, including baked goods like babka and gourmet lox. Also of note: great deviled eggs, and catering, because who doesn't want a huge plate of smoked salmon? — Caleb Pershan
477 South California Ave, Palo Alto 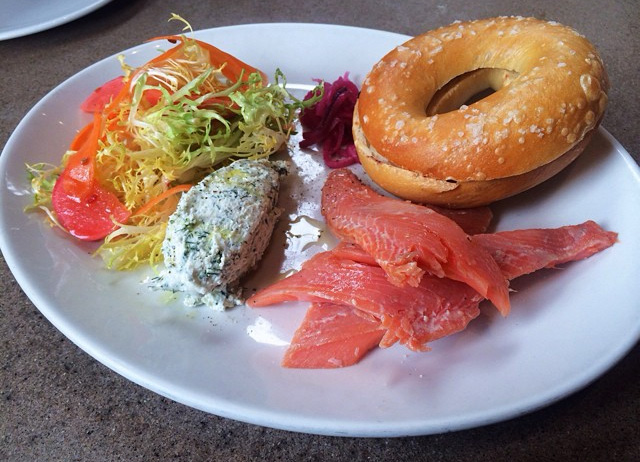 9. Nopa
I'm guessing that unless you're a Nopa brunch fanatic you didn't even know that pastry chef Hannah Ziskin makes small batches of bagels most weekends, to be served as a special with house made cream cheese, farmer's cheese, and/or lox or smoked trout. They're yeast-risen overnight, boiled in salted, malted water, and flavors run the gamut from salt and pepper, to pumpernickel, to everything. You need to be part of the early brunch crew to get one, because Ziskin only makes a few dozen of these by hand each Saturday and Sunday.  Jay Barmann
560 Divisadero at Hayes 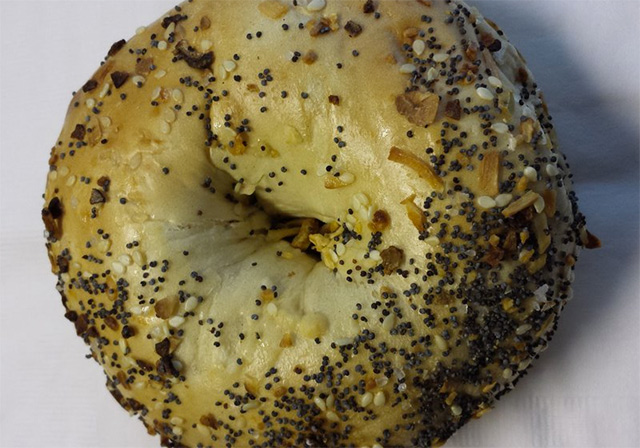 10. Holey Bagel
Holey Bagel has a lot of fans in Noe Valley, and they've been going strong for many years now on 24th Street. But even some of its fans are going to give the caveat that this place is "good by SF bagel standards," and nothing to write home to Brooklyn about. Nonetheless, if you find yourself climbing out of bed  yours or someone elses  in Noe Valley on a weekend morning desperately craving a bagel with whitefish salad, you're going to find a mighty decent one here that you will not be complaining about.  Jay Barmann
3872 24th Street, at Sanchez 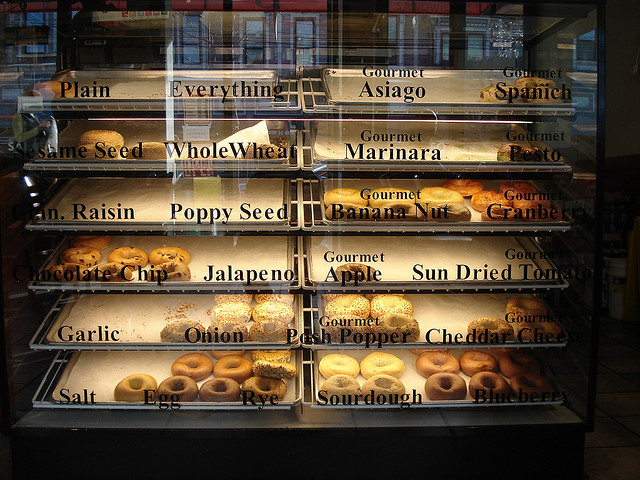 11. Posh Bagel
They may not be the most authentic around, and in fact some of them are just balls-out California with their jalapeno- and occasional pesto-laden tops. But I like these bagels anyway, dammit. They're the correct consistency, chewy and not too bready, and superior to Noah's in every way. Assuming you don't have serious New York snobbery about things like asiago cheese or blueberries in your bagel  and also assuming you don't mind eating delicious things in secret for fear of judgment from your authenticity-obsessed friends  we suggest you try this place. You might be a convert.  Jay Barmann
There are 14 Posh Bagel retail locations located throughout the Bay Area.

(Allegedly) Honorable Mention: Though they've been too rare, pop-up-wise, for SFist to give them a try yet, the bagels from occasional La Lengua neighborhood pop-up Shegetz Bagel (making more appearances at Pizza Hacker, supposedly, at some point) are said to be quite good, according to Sprudge. Take that as you will.

In addition to criminal charges brought against them earlier this month by District Attorney George Gascón, San Francisco Sheriff's deputies who allegedly led forced Fight Club-like matches between inmates, engaging in patterns of

With over 1.5 billion users, Facebook is a teeming digital place. And so it is perhaps unsurprising that it teems with posts that piss other users off. This fact, which likely comports

—
The 11 Best Bagels In The Bay Area, Ranked
Share this