As St. Patrick's Day approaches, we at SFist thought you needed a primer on the best of many places around San Francisco to indulge in traditional Irish pub grub (and baked goods) whilst drinking your Guinness and Harp. San Francisco has, of course, long been home to legions of Irish expats, immigrants, and J-1 visa visitors  the Irish Times reported last year that a third of traveling Irish students every year—2,800 or so—come to California, most of those to the Bay Area  and most of the city's neighborhoods still boast one or two Irish pubs, if not three or four. Below we bring you the top spots for Dublin-style eating, before or during your St. Paddy's pub crawls.


Andytown
While Outer Sunset coffee shop Andytown is known primarily for their caffeinated beverages, their homemade pastries and authentic Irish soda bread, adapted from recipes by co-owner Michael McCrory's dearly departed granny, also draw raves. "The difficult thing about Irish baking," McCrory says, "is knowing how to hold back," and that's why the bread is typically served with little more than a side of butter or a bit of jam. Why embroider on perfection? — Eve Batey
3655 Lawton Street at 43rd Avenue 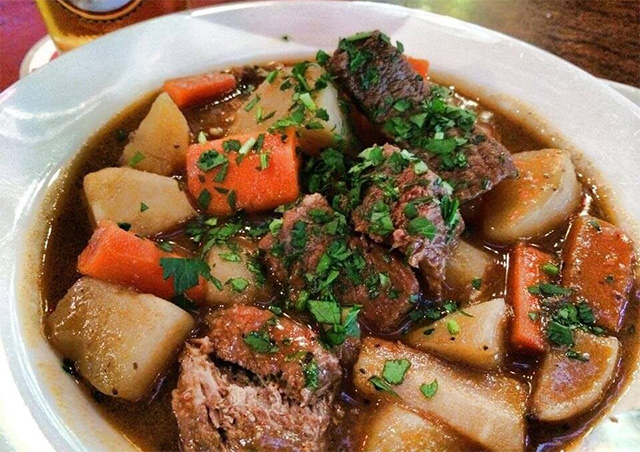 The Chieftain
Clocking in with the highest Yelp rating of any Irish pub in town, this SoMa spot is known for showing soccer games year round and serving up some fine shepherd's pie and Irish stew. If there's a big conference in town at the nearby Moscone Center, you could have some trouble getting a drink at the bar, but the place still maintains pretty reasonable prices despite the location.
198 Fifth Street near Howard 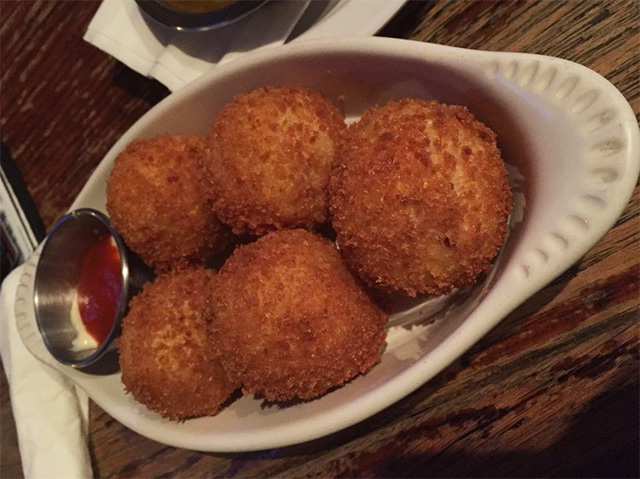 Durty Nelly's
This Outer Sunset favorite haunt is the place to go for Ulster Fry on a hungover Sunday, and they also make their own homemade sausage rolls, and some delicious deep-fried mashed potato balls (with cheddar and bacon), dubbed Durty Balls. Also, they serve another Dublin specialty, curry fries  kind of like poutine but with curry sauce  and some nicely fried fish and chips.
2328 Irving Street at 24th Avenue 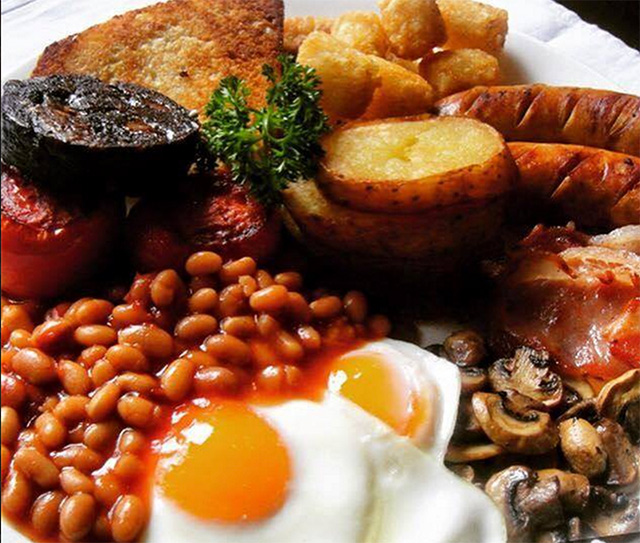 Ireland's 32
At this most Irish spot in the Inner Richmond (besides The Plough & Stars, that is, which does not serve food), you'll be treated to traditional fish and chips, corned beef and cabbage, and a good Irish breakfast (when available), in addition to a solid burger and plenty of American fare. Also, there's often live music at this all-day establishment, and you can expect a raucous scene that's heavily populated with USF students in their early twenties come Thursday, Friday, and Saturday nights.
3920 Geary Boulevard at Third Avenue 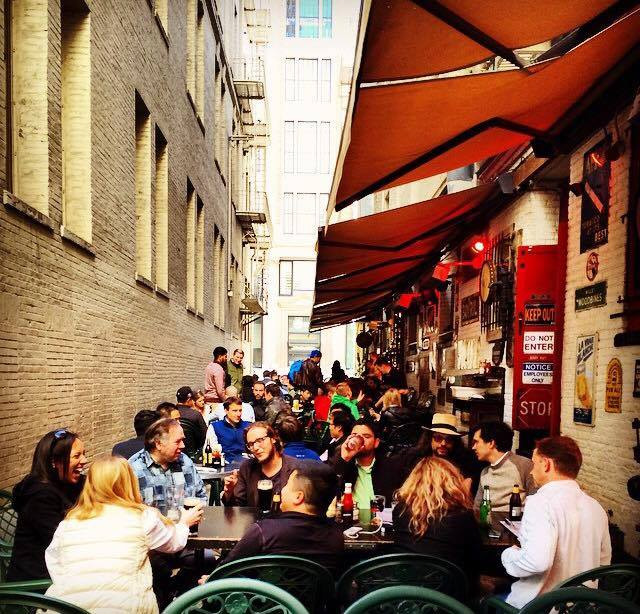 The Irish Bank
Along with the standards like Irish stew and some solid fish and chips, the Irish Bank in the Financial District does both beef and vegetarian versions of shepherd's pie, as well as ribs, bangers, and a Malay-style chicken curry. And this place, with its quaint historic alley, is the place to be both on St. Patrick's Day and the Saturday of the parade, when they host their own raucous block party, with live Irish music all day. More details here.
10 Mark Lane, off Bush between Grant and Kearny 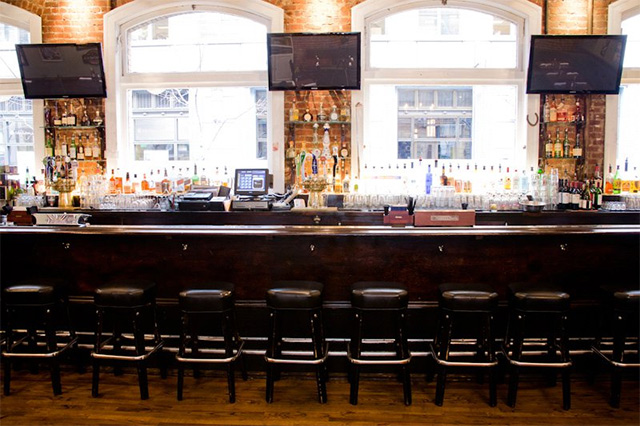 Irish Times
While you'll find plenty of Americanized stuff like fish tacos and nachos at this Financial District pub, the core of the menu remains the Irish specialties which includes both a traditional shepherd's pie with lamb, and a cottage pie with ground beef and a potato crust, as well as bangers 'n' mash and, of course, fish and chips. And, for the St. Patrick's Day parade, they always open at 8 a.m. serving a full Irish breakfast, beans, sausage and all.
500 Sacramento Street near Sansome 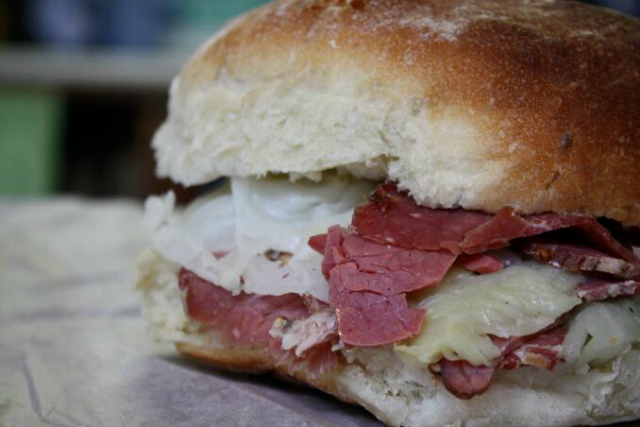 John Campbell's Irish Bakery
In 2007, John Campbell brought his 30 years of experience as a journeyman baker in Belfast to the Outer Richmond, and since then the neighborhood's been lining up for his potato bread, Irish crusty bread, brown bread, and scones just like yer ma (and hers before her) used to make. Their full menu of traditional breads and pastries is mind-blowing, but their savory pasties and rolls are also not to be missed. Campbell even sells a mean corned beef and cabbage sandwich though, according to him, that combo's more of an American tradition. John Campbell's is strictly take-out (there's no seating), so it's a great place to pick up some bread for home, or a sandwich to enjoy at a neighboring pub. — Eve Batey
5625 Geary Boulevard between 20th and 21st Avenues 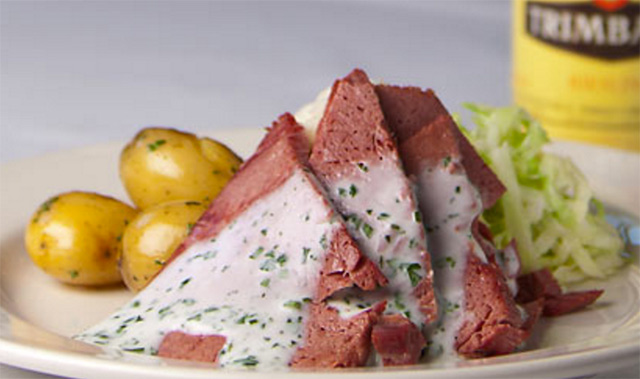 Corned beef and cabbage with boiled potatoes at Johnny Foley's. Photo courtesy of the restaurant.

Johnny Foley's
Traditionally one of the busiest Irish bars in town on parade day, because of its proximity to Market and Powell, Johnny Foley's offers a full food menu that includes corned beef and cabbage (complete with parsley cream sauce), fish and chips, a shepherd's pie-like Cottage Pie, and even a vegetarian version of traditional Irish stew, loaded with portobello mushrooms, asparagus, and spinach. If you're actually headed there on the Saturday of the parade, though, you'd best get in very early, or be prepared for a line around the block.  Jay Barmann
243 O'Farrell Street at Cyril Magnin 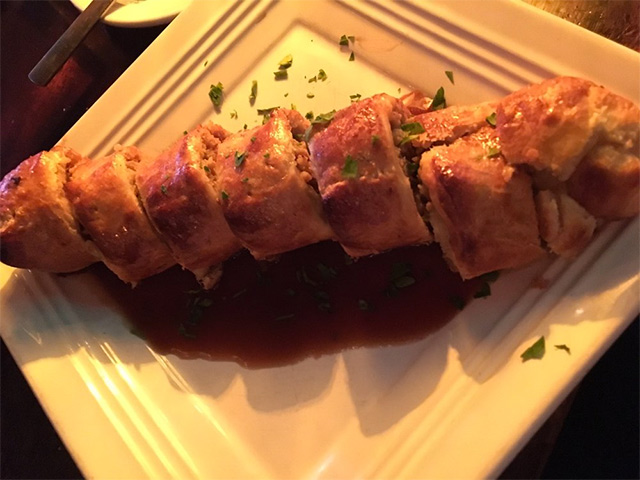 Kells Irish Restaurant and Pub
Rounding out the best Irish outposts in the Financial District is Kells, which has sister spots in Portland and Seattle, and does a more than serviceable Ballycastle Sausage Roll in addition to all the pub standards like shepherd's pie, some really good fish and chips, corned beef and cabbage, chicken pot pie, and Irish stew. The place can get nuts on the weekends, though, and features Top 40s tunes and dancing downstairs.
530 Jackson Street at Columbus 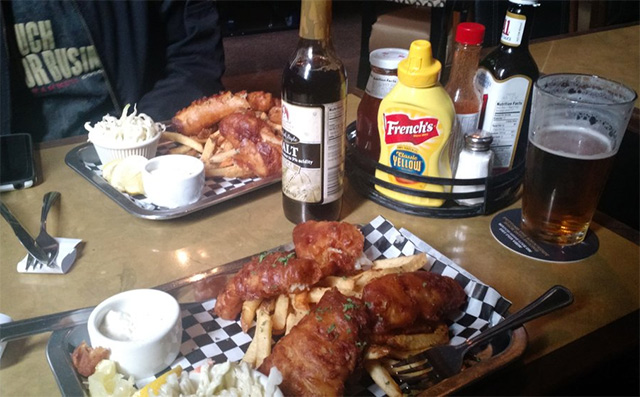 The Napper Tandy
You know what's good at this Mission spot? The Guinness stew. You know what's great? The all-you-can-eat fish and chips deal on Mondays. The excellent beer-battered cod also gets used for fish tacos, and the also do waffle fries and shoestrings, in addition to hand-cut fries  not to mention bacon-cheddar fries, and Disco Fries, which is just poutine. And, because this is an Irish spot in the Mission, they've got a unique mashup item that works pretty well: a corned beef quesadilla.
3200 24th Street at South Van Ness 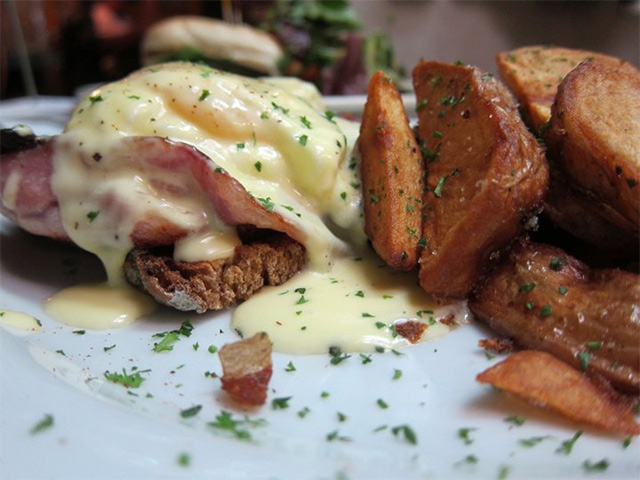 The Phoenix Bar & Irish Gathering House
Also in the Mission is this popular spot, which is perfect for a cold night when some hot stew and soda bread are all that will hit the spot. They're also known for a spot-on corned beef Reuben, and for the fact that unlike most of the restaurants in the neighborhood, they serve until 11 p.m. Also notable is their brunch, which features some good corned beef hash, and Bacon Boxty  a potato cake topped with Irish bacon, poached eggs, and Hollandaise.
811 Valencia Street at 19th
The Chieftain's Irish stew. Photo: Facebook

Though buying cigarettes might soon become a 21-and-over activity for any smoking Californian, San Francisco isn't content to wait for Governor Jerry Brown to decide if he's gonna OK the package of tobacco

You can still lounge to your heart's content across an entire row of BART seats — at least for now. The vote on whether or not to impose fines of up to $500 on