It appears that while in prison, convicted dark web purveyor and Silk Road creator Ross Ulbricht, a.k.a. Dread Pirate Roberts, has been making some art. We got an email, possibly from Ross's mom Lyn Ulbricht (in her role as spokesperson for the Ross Ulbricht Legal Defense Fund), describing a "unique fundraiser" that is apparently step one in bankrolling Ulbricht's appeal in federal court.

Ulbricht received a life sentence for his crimes last May, which included trafficking drugs on the internet, narcotics-trafficking conspiracy, running a continuing criminal enterprise, computer-hacking conspiracy and money-laundering conspiracy, all in connection to the creation of the Silk Road marketplace. The site was shut down, and Ulbricht's San Francisco home raided by the FBI, in 2013. The federal judge who heard Ulbricht's case said that the underground site, and his actions therein, were "terribly destructive to our social fabric."

Ulbricht has tried to claim that he was not seeking profit through the site, but was merely making a political statement and creating an exchange for contraband because "people should have the right to buy and sell whatever they wanted so long as they weren’t hurting anyone else."

Now, Ulbricht has created an original pencil drawing called "The Trial I Saw," which is being revealed one small square pixel at a time here. The idea is, donors pay a dollar per square, with a grid of 9,156 squares that will ultimately reveal the full drawing.

Here's what it looks like so far. (Bet it won't be as fun as Susie Cagle's paintings from the trial!) 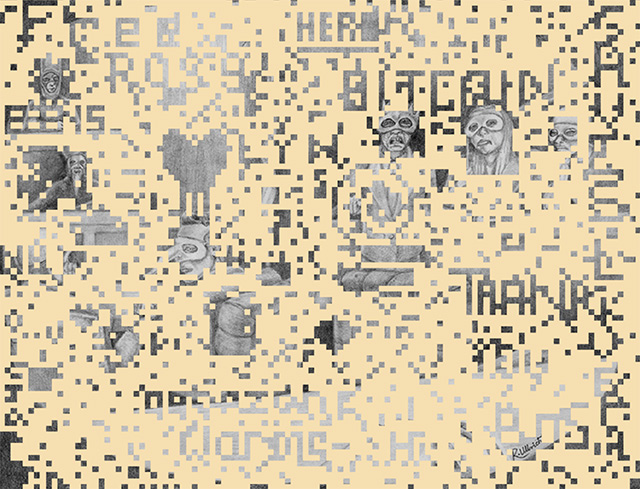 As a bonus, Roberts and Roberts Brokerage has donated 21 one-gram gold bars that are scattered throughout the grid. Lucky players who land on the right squares will win a gram of gold.

Finally, once the art is revealed, the original art piece is will be auctioned to the highest bidder, while posters will be for sale in the FreeRoss.org store.

Did I mention there was also evidence that he paid a guy $150,000 to murder a Silk Road user who threatened him with extortion, and he kept a journal about all of this?

Remember those renderings we showed you last month of The Light House, the converted and luxuriously renovated former Second Church of Christ Scientist that has long laid vacant and condemned next to Dolores