Mid-Market diners craving the royal taste of a Whopper will have to go a little further to scratch that itch these days, as the Burger King at Market and Grove Streets has been closed for health code violations — but has allegedly removed the legally required signs saying as much.

According to a notice posted to the front of the building on February 19 and reported on by Hoodline Monday, SF's Department of Public Health ordered the closure of the Burger King at 1200 Market Street for the "identified existence of imminent health hazard(s)."

Though the hazard(s) themselves weren't listed, the DPH says that whatever it was could cause (all random capitalizations are by the DPH, not SFist) "Food Intoxication, Food Infection, Disease Transmission, Vermin Infestation, or Hazardous condition that requires immediate correction or cessation of the operation."

This Burger King is no stranger to health code violations, as you can see from these citations on the DPH's site. Their previous inspection (August of 2015) still got them a score of 84, which the DPH classifies as "needs improvement" due to "Multiple violations observed...Typically, several high-risk violations." However, last year's score was a 10-point improvement over 2014's score of 74, after (among other things) a "high risk (of) vermin infestation" was noted.

That Burger King also sports a total of two stars on Yelp. According to a review posted by one Scott H. on February 20, the Burger King's staff removed the DPH notification (a violation in and of itself, as those notices can only be removed by a health inspector) and replaced it with a sign claiming they were just closed for remodeling. 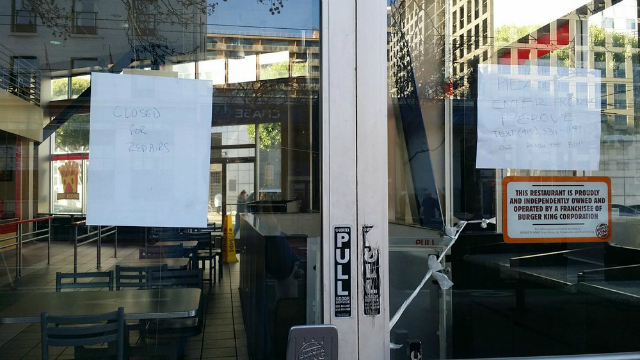 "Shut down by the health department of San Francisco. Filthiest Burger King on earth," Scott H's one-star review reads  though that superlative is likely unwarranted given a few Burger Kings in New York and Chicago that might win that prize.

"Even though the health department shut them down, they took down the signs. Today handwritten signs in the windows simply explained closed for remodeling. Not to be fooled, this place was shut down by the Health Department for filthy conditions."

Related: Health Department In Violation Of Own Standards As Restaurant Inspections Lapse
The 25 Best Burgers In SF And Oakland

The SFPD is seeking an adult — and apparently quite aggro — soccer player who brutally beat the referee who ejected him from a game. The Chron reports that the fateful adult-league game was played

San Francisco-based mobile games-making something something unprofitable Zynga has one trick left up its sleeve: the sleeve itself, which the company now plans to sell. As Bay Area real estate blog The Registry