"Love thy neighbor" isn't typically the guiding principle on Nextdoor.com, the private, free social network for neighborhoods which launched in San Francisco in 2011. Since then it's raised, per Crunchbase, over $200 million in funding as well as thorny questions like: How much racism — coded and explicit — can you pack into one website?

Nextdoor has fairly readily copped to the fact it has a racial profiling problem. The company's CEO even promised changes to the site's rules and guidelines back in October — and now those seem to be falling into place. "Don't be racist" is obviously not much of a credo, so after meeting with Oakland city officials, according to ABC7, Nextdoor announced in a blog post that it's introduced an option for flagging a post as "Racial Profiling."

Here's an example, provided by Nextdoor:

"Suspicious car in neighborhood: Black male in blue ford sedan doing drive-bys on Shelby Street, near my house at 52 Shelby. Didn't get a photo of the car. Never seen this car before. Keep eyes open."

"If you saw this post," Nextdoor asks, "how would you know who to be on the lookout for?" Exactly. "1. It doesn't give your neighbors much to go on (and) 2. It casts suspicion on every person of that sex and race who may legitimately be in or live in your neighborhood."

Now when you move to post about suspicious behavior in a neighborhood on Nextdoor, you'll be encouraged to focus on activity rather than vague, often racial descriptors. “Focus on behavior, not appearance” reads a new pop-up you see before you post. But perhaps most efficacious will be the option to flag posts. 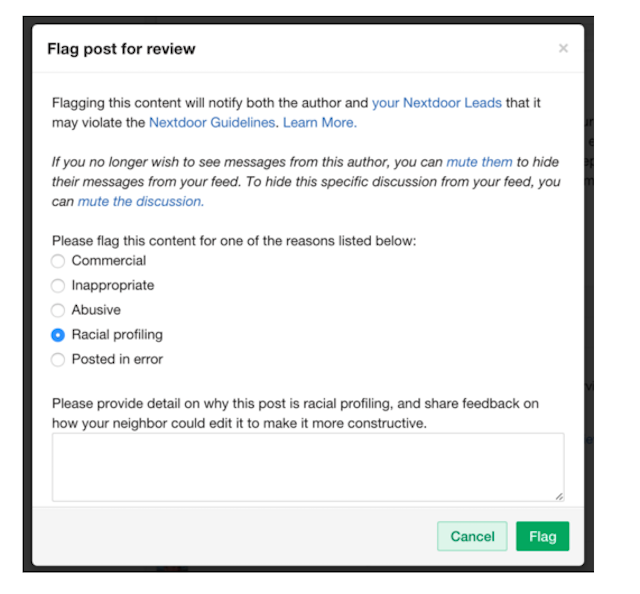 "When a post is flagged as 'racial profiling,' it is immediately escalated to the Neighborhood Lead and Nextdoor Support Team so that offensive content can be removed."

So, got that? Don't engage in racial profiling, and flag it when you see it. As they say, good Nextdoor posting etiquette makes good neighbors.

Dolores Park is already full of garbage! pic.twitter.com/lXINISx09h— Peter Lawrence Kane (@WannaCyber) January 28, 2016 Well that didn't take long. As you no doubt know, the south side of Dolores

As taxpayer costs related to Super Bowl City continue to increase, we learn today that at least one city department is working hard to keep expenses off the books. SFMTA officials, it seems,

—
Now You Can Flag Nextdoor Posts For Racial Profiling
Share this