We heard a couple weeks ago that the first national tour of the wildly popular Broadway musical Hamilton would be kicking off this fall in Chicago, with definite stops in San Francisco and Los Angeles, and today we get clarification about the dates. The show will be coming to SF first, in the spring of 2017, but these are extra-long engagements that aren't typical for Broadway tours: They are all upwards of five months long.

The Chicago opening is set for September 27, 2016, as earlier reported, but the show won't move on to SF's Orpheum Theater, under the SHN umbrella, until March 2017. It will be a 21-week engagement here, and then the tour moves on to LA's Pentages Theatre, opening on August 11, 2017, as the LA Times reports.

As the New York Times explains, "The New York production will continue to run indefinitely, and Hamilton is also exploring a likely production in London."

The show, if you somehow haven't heard, uses pop, R&B, and hip-hop song styles as well as a multicultural cast to tell the story of Alexander Hamilton, the founding father, right-hand to George Washington, author of The Federalist Papers, and the nation's first secretary of the Treasury, as well as his nemeses Aaron Burr and Thomas Jefferson. And if that somehow sounds like dry material, the score by Lin-Manuel Miranda, who plays Hamilton in the Broadway cast, keeps it anything but. As the NYT's Ben Brantley wrote that the show is "is making its own resonant history by changing the language of musicals," and is "proof that the American musical is not only surviving but also evolving in ways that should allow it to thrive and transmogrify in years to come." 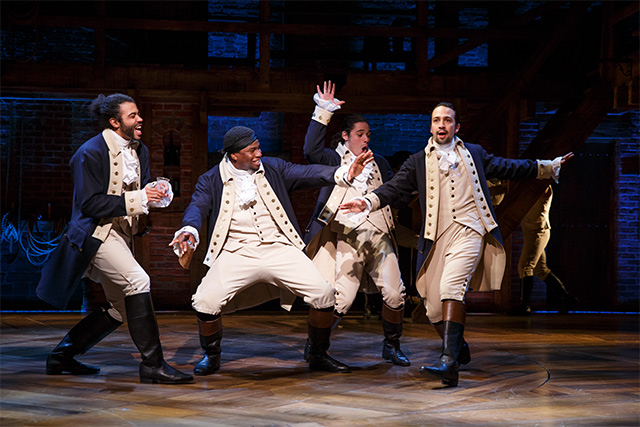 Producer Jeffrey Seller previously assured us that he's going to recreate the Broadway experience inasmuch as he possibly can, saying, "When we come [to these cities], it won't just be a tour. The entire creative team will come [t]here, live [t]here for a month to give this show the same tender loving care they gave it in New York."

Today he announced that the decision to kick off the tour in these cities is based on the previous success of shows like Wicked in both SF and LA. "We make these decisions based on the size of the market and the power of the market to sell tickets for long periods of time,” he said. “Both cities have accommodated shows for even longer stays."

The casting of this tour is likely to get a lot more attention that other national tours as well, with the show breaking Broadway records and earning more national buzz than probably any other show since Rent. No casting decisions have yet been made public, though both Broadway and Hollywood talent will likely vie for a few of these parts.

San Francisco theater fans are encouraged buy subscription packages for SHN for next year to assure themselves seats  otherwise single tickets will go up for grabs later and likely sell out as fast they have been in New York  and perhaps faster than Book of Mormon, which has already sold out several tour engagements here over the last few years.

Otherwise, as the Onion AV Club explains, the first time you may see the show will be when NBC eventually airs it on TV in a few years  because network chairman Bob Greenblatt is an investor in the show.

Note: SHN SF is an SFist advertiser, but this was not technically a sponsored post or directed in any way by the advertiser.

Previously: Hamilton The Musical Will Be Coming To SF And LA, Possibly By Fall

Will Shegetz end SF's bagel nightmare? [SFist] I don't read Japanese, but if Bloomberg reporter [Yuji Nakamura/Twitter] isn't pulling our legs, maybe Jay needs to take a trip to Japan for a

—
'Hamilton' Comes To SF For Five Months Starting In March 2017, LA After
Share this