The narrow lots located on Octavia Boulevard between and Oak and Fell Streets could soon be a lot more crowded as plans to develop the 18-foot-wide parcels have been submitted to the Planning Department.

SocketSite reports that the two lots would become home to two identical buildings designed by Envelope A+D, and would each include four two-bedroom condos and eight studio condos in addition to ground floor retail space.

The proposed buildings would even come with a sliver of a green roof, for all the lounging needs of future tenants.

Will it cast a shadow over nearby Patricia's Green, you can practically hear the NIMBYs thinking. SocketSite notes that the San Francisco Recreation & Parks Department has deemed a potential sunshine decrease to be "insignificant."

Expect to see more and more proposed infill projects like this one as resourceful developers continue to search for new plots in a place that ain't getting any bigger to the North, East, or West. 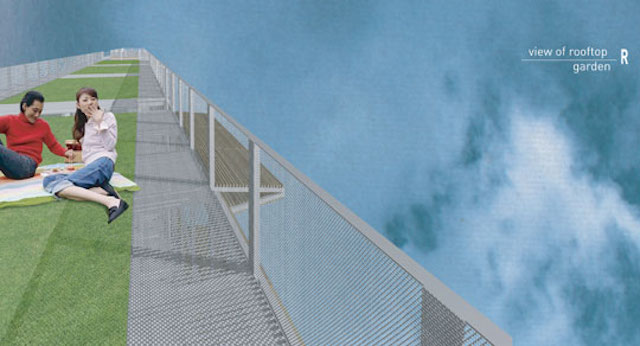 A 22-year-old man was with a female friend in Dolores Park Tuesday evening when the pair was approached by a group of male suspects, one of whom asked if they wanted to buy

Recently SFist ran two stories about Facebook users who reported outrage at that company's "real names policy" — really a policy of disabling accounts when they're reported by other users as fake. The first