Multiple generations of San Franciscans have gotten their holly-jollies every December at the Tom & Jerry House, an unbelievably huge and fantastically tacky Christmas display at 21st and Church Streets in Dolores Heights. Nominated for San Francisco landmark status, featured in annual local and national media reports and delivering a yuletide shock-and-awe campaign to rival every house on The Great Christmas Light Fight to mindblown passersby, the display is nearing its 30th annual iteration. SFist spoke with the decorative duo behind the display, who have busted out their illuminated icicles, oversize gifts and stockings, roller coasters, dancing dolls and ferris wheels since the 1980s — and handed out hundred of thousands of candy canes in the process

Tom Taylor and Jerry Goldstein have been together for 43 years, and the live Christmas tree that centers the display has been with them since before they moved to Dolores Heights. Jerry, a neurologist, recalls buying it in 1970 and putting it in their living room as a houseplant. Tom, a display expert who's worked for major retail chains and on the Rainbow flags used annually on Castro and Market Street, recalls it getting so big he had to plant it outside. “Then it got really big and the roots found the sewer pipe and went crazy,” he said. 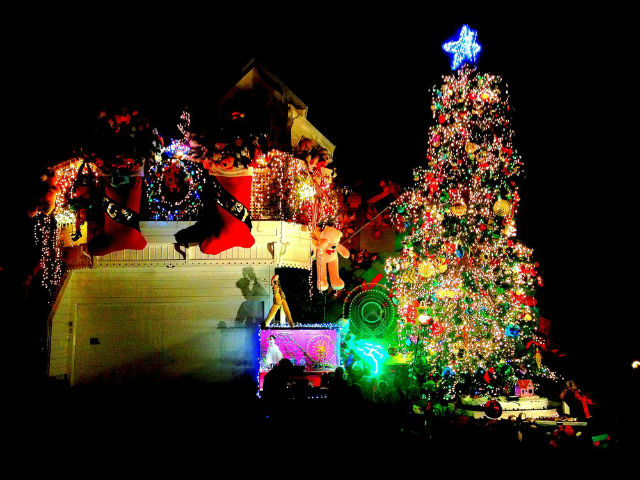 The tree is a Norfolk Island Pine and is very much alive. The boys bought it in 1970 at Cost Plus Nursery and by 1973 it was living in their yard. “Like Audrey, it grew and grew and grew, and now it’s 60 feet high,” Jerry said. “People always ask ‘where did you bring it in from?’ and I say the North Pole, which is South of Market.”

The Christmas displays started around 28 years ago, though neither Tom nor Jerry is exactly sure what year. “I decided I would make it look like the average Christmas tree in an average home, which is about 6 feet high,” Tom said. “It has all types of ornaments on it, it’s not like Macy’s with all one type. I don’t do ‘theme’ things, that’s for the department stores. The scale just got bigger as the tree got bigger.”

“It got so big that I couldn’t just throw lights on it anymore,” he remembered. “I wanted it to be like what you experience when you were a child, because the most important thing to you when you were a child was the presents, the toys and the stuff you’re going to get.”

Tom would reuse the displays he’d made for various professional organizations’ holiday events. “The gifts I did right away because the tree had missing limbs, so I had to put some boxes in,” he said. “They asked me [to design] a big dinner at the Pacific Stock Exchange, ‘make some big red ribbons for us’ they said. So I made those and they had some holes in them but whatever. I used those to cover where the poor tree didn’t have limbs. And then I started doing the presents and the kids loved that.”

The neighborhood adults ate it up too. “Everyone got after me about doing it, it was really my old straight friends who’d come by and they’re the ones who really got after me about it,” Tom said. “After I realized what an impact that it really had, then it really took a life of it’s own.” 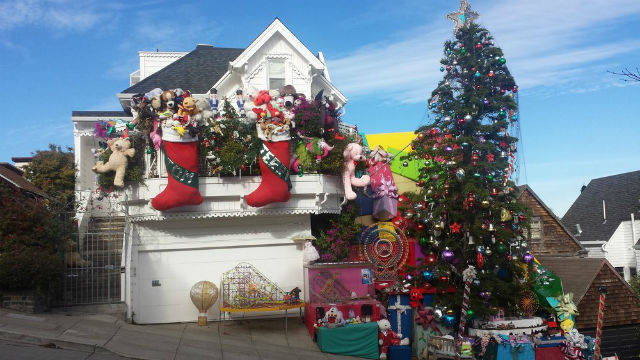 Attendance swelled, and Tom & Jerry introduced a Santa Claus to hand out candy canes. But foot traffic gave way to car traffic with passage of California’s car seat laws. “Before we had the car seat law, we would go through up to 10,000 candy canes [each year],” Tom remembered. “The car seat law really changed the amount of kids who were outside, because it was so much work [for parents] to unstrap them.”

The holiday display took on another life after being featured in a 2011 Wall Street Journal article. “Many executives come with their limos and people they have taken to dinner to show them the tree”, Jerry said.

Being on a ridiculously steep incline, the humongous display presents major technical challenges. “We’ve certainly had problems with the weather,” Tom said. “We have all types of rods that go down to the concrete retaining walls to support the tree and hold everything in place. We started a month ago getting the structural steel ready. Everything is tied down. Because you have the winds come through here and it is a real problem.”

Foot and car traffic also cause inconvenience for the neighborhood, and the guys ask that you please not honk car horns and avoid parking on their block of 21st Street. “One of our neighbors who’s a little fussy had a penchant for calling the police repeatedly because of the noise and the inconvenience of the tree,” Jerry remembered. “And then his mother came to visit from Florida. And she told him, ‘You are so fortunate and lucky to be living across the street from that beautiful tree. Isn’t that a joy to you?’ And she said it in front of us. And we haven’t heard a peep from him since then.”

A documentary film about Tom and Jerry and their tree played at Frameline in 2011 and is now available for sale on DVD at the tree's concession stand.

As the creators of San Francisco’s unofficial official Christmas display, Tom and Jerry see the annual holiday creation as a form of philanthropy not unlike the charitable donations of their new nearby neighbor Mark Zuckerberg. “Some people like to write checks. We like to do good deeds,” Jerry said. “I don’t want any fucking legacy put after my name after I’m dead. I want it now.”

The Tom & Jerry House holiday display remains a public attraction until New Year’s Day, illuminated from 6-10 p.m. each night. Santa Claus will be there to hand out candy canes each night from 6-10 p.m. through December 24.

Image: Ed U. via Yelp

In today's edition of "how Super Bowl 50 might actually hurt San Francisco businesses and taxpayers" we hear from the Castro Merchants Association. The organization last week expressed concerns that the Super Bowl

A debate has been raging all year surrounding class-action lawsuits against sharing-economy companies like Uber, Lyft, Instacart, Postmates, and others about whether their drivers/personal shoppers should be considered employees rather than independent

—
The Tom & Jerry House: Inside SF's Most Insane Christmas Display
Share this