As Daisy noted among the doings of her bedraggled 49ers who this week suffered a somewhat less than grim defeat to Arizona, the writing was on the wall — or rather, in the sky — regarding team owner Jed York. 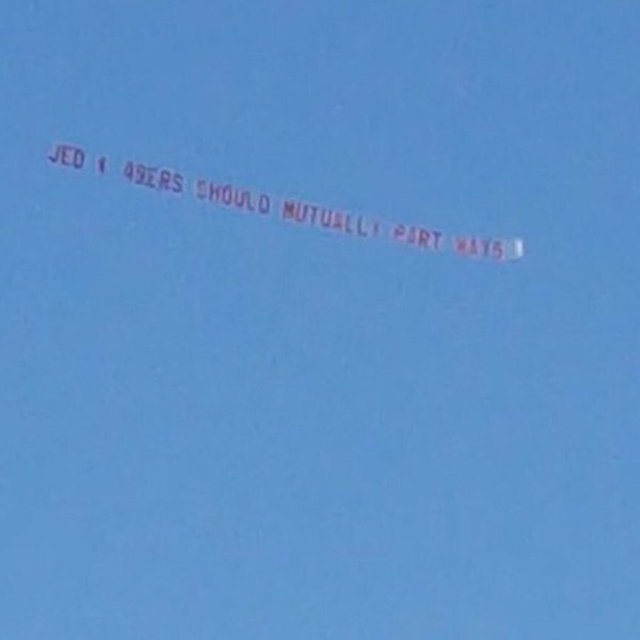 “We didn’t want to come off as whiny fans," banner co-creator Jack Harrington told CBS SF, "but we felt the message was pretty strong [and] still respectful at the same time."

The literal airing of the common sentiment among 49ers faithful cost $1,000, which Harrington split with two others. Correction: This cost was split among 50 donors.

“I absolutely expect a reaction from Jed about this,” said Mark Scannell, another of the saboteurs. At that price — perhaps they were paying for each letter? — a note might be nice.

The banner was considerably more decorous than previous insults leveled at York — most notably an inflatable penis bearing his name that some held aloft during a previous game this season.

As no one will let him forget, York, who sees himself in the vein of Silicon Valley CEO and technically serves that role for the team, forced out coach Jim Harbaugh at the end of last season. That move fanned the flames that currently engulf him, or that fans wish would, and it's likely calls for his leave-taking will be less politic going forward.

Previously: Daisy Does The Niners: SF Manages To Not Get Pummeled In 19-13 Loss To Arizona
Photo: Here's What You Do With An Inflatable Penis At A 49ers Game

A vital new addition to SF's Best Burgers list this year, the delicious pimento cheeseburger at Mission bar ABV, is reportedly under threat of removal from the menu as recently promoted sous chef

The SFPD sent out an update statement Monday regarding the status of Officer Chris Kohrs, who stands accused of two counts of felony hit-and-run after his car plowed into two pedestrians in North