This month’s fire at 16th and Shotwell again revved up suspicions that the Mission District residential fires, now at least eight and counting so far this year, are suspicious malfeasance by profiteers in the stratospheric SF real estate market. A full 67 percent of the comments on SFist's breaking news article about that fire were devoted to debating the conspiracy theory that landlords might be burning their own buildings to vacate rent-controlled tenants or to try and sell the properties for, say, a cool $20 million.

“It’s a question that I get asked repeatedly,” Mission District supervisor David Campos (D-D9) told SFist. “Given what’s happening in the neighborhood, given the fact that there is a history of arson in the Mission going back to the 70's where there was actually evidence of arson, I think that we have to do a better job of providing information to the public because this question keeps coming up.”

So we decided the chart out the San Francisco fires of recent years to see if there are patterns in certain neighborhoods related to those neighborhoods’ real estate value. This article has no inside information or new evidence on any specific fire. Instead, we take a broader approach and analyze data on the frequency of San Francisco fires, their locations, and any possible correlations between property value increases and fire incidence.

Does The Mission Have More Fires Than Other SF Neighborhoods? No

Here we see SFFD call distribution by supervisor district from 2012-14. (Clarification added: This chart includes all SFFD calls, including those for fires, heart attacks, drug overdoses, kittens in a tree, etc. For 'fire only' data, see the chart below "Working Fires and Greater Alarm Fires".) That big spike in the middle is not the Mission District!

That big spike in the middle is District 6 — SoMa, the Tenderloin and Mission Bay. The Mission is District 9, third one from the right, with far fewer SFFD calls than District 3 (Financial District, North Beach, Chinatown) and District 5 (Hayes Valley and the Haight).

There is significant statistical noise in that chart, since as previously noted not all calls to SFPD are for fires. But the statistical noise would apply equally to all districts, so the overall trends appear valid.

And the Mission does have old buildings. “The Mission District is comprised in large part of older, wood-framed buildings,” Fire Department spokeswoman Lt. Mindy Talmadge told SFist. “Many have not had the electrical work updated, let alone any structural updating.”

Conspiracy theorists can still point out that SoMa and Mission Bay are also seeing a lot of luxury condo development, hence District 6’s frequency of fires, and that the fire locations do loosely correlate with the sub-areas seeing the steepest rent increases. They can also note correctly that a higher percentage of San Francisco’s fires are occurring in the Mission these days, as you’ll notice below.

Have Fires Become More Frequent in the Mission During This Boom? Yes 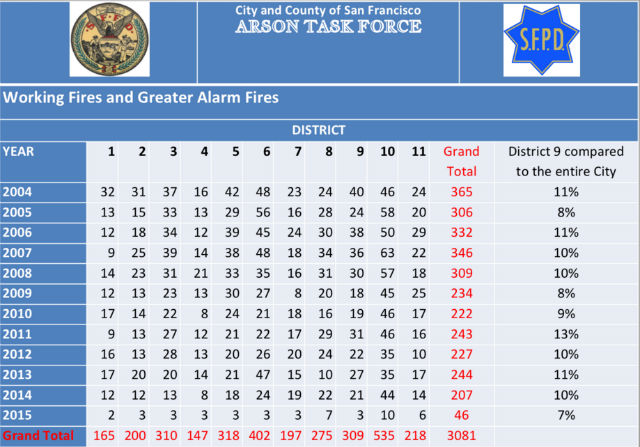 Since the start of this current tech and property-value boom, the Mission has seen a larger percentage of San Francisco’s fires than before the boom. Above we see fires by district by year, going back to 2004 (the data only goes up to March 2015). Notice how the uptick in the percentage fires in District 9 coincides with the beginning of the tech boom in 2011.

Sure, that percentage is a return to 2006-era levels. And maybe 3 or 4 percentage points is just standard deviation. But certainly SFFD trucks are leaving fire stations for Mission District fires at a higher rate than they were back in 2009 when unemployment was at 9%.

But Do Fires Increase When SF Property Values Rise? No

Again referencing the above Arson Task Force chart, notice how the grand total of all San Francisco fires has decreased most years since 2004. That period covers a crash (2008) and a boom (2011-2015). San Francisco fires have decreased consistently over the last ten-plus years, regardless of property values or economic conditions.

Arson is serious and scary business. What these charts do not show you is the 70 people who died in those fires between 2004 and 2014, plus however many we will end up losing this year.

These numbers could still either support or debunk the landlord arson conspiracy theory, depending on your perspective. Debunkers can note that fires have historically decreased and that Mission District fires are less common than SoMa/Mission Bay fires or Financial District/North Beach fires. Conspiracy theorists can point out that Mission District fires are indeed on the rise in the current real estate environment. So both sides have legitimate points to argue over our Thanksgiving get-togethers. But when having these arguments, please don’t leave stove burners unattended or allow grease to drip on open flames.

The headline says it all, you guys! The dog days are over, and Muni has transformed into a swiftly-moving chariot, according to the San Francisco Municipal Transportation Agency. Did you notice? In a

I should have known better from the quotes he gave, but the story of the Australian-Vietnamese man named Phuc Dat Bich being repeatedly banned from Facebook turns out to be a hoax. The

—
Are Mission Landlords Really Burning Their Own Buildings?: An Analysis
Share this