By the time Carol Doda died from complications of kidney failure in San Francisco on Monday, the woman who described herself as having "started a sexual revolution that spun as fast as twirling tassels" had lost her hearing, struggled with debt, and reportedly shrank to a mere 60 pounds over a long period of dialysis.

But the stripping pioneer whom Chronicle columnist Herb Caen once called “the Susan B. Anthony of this particular liberating movement” was "never an old lady," according to Ron Minolli, the man behind the bar at Doda's preferred North Beach watering hole Gino & Carlo.

"[Carol] wasn't just a dancer that would show her breasts," he said, his 62-year-old face lighting up like a boy's as we discussed his friend of four decades. "We're losing more than just the woman who started the topless thing. She was a comedian, she was a dancer, she was a showperson, and she was a fun person."

Near the end of her life, when she had gone completely deaf, Carol "had a guy that would write things down for her, and everything else. And somehow she would take over the conversation. She could pitch and catch with the best of us, meaning that if you joked with her, she would joke back with you."

One of Doda's jokes concerns her infamous 1964 "debut." A cocktail waitress and somewhat-clad go-go dancer, Doda descended on a hanging piano to perform an impromptu topless number at the Condor. Even in liberal San Francisco, the act of "indecency" was unheard of and technically illegal. But Doda cared not a whit, writing that "The owner and I ended up in the slammer... [and] I was back slamming on stage in two shakes of a stripper’s tail."

Outside the Condor Club Thursday night, a man in a top hat and fur overcoat who calls himself Norman the Doorman said, "Not a night goes by when I'm out here that at least one but usually something like two or three people come ask me if Carol Doda is here.They say things like 'When I was in the army, I came here to see Carol Doda.'"

But Doda's relationship with the Condor Club, whose enormous sign long bore her name, was strained. Sitting in the Condor's darkened "champagne room," club manager Francis Huinh told me, "For a long time she had a little bit of animosity toward this place. We did our 50-year anniversary here, but she wasn't a part of it."

Whatever it did to social mores, Doda's move to the "monokini," as she called her garb, likely improved her fortunes. Payment and tips reportedly went up across the board for the dancers who followed suit up and down Broadway, which nearly all of them did within months of Doda's topless debut. Just a month prior to the 1964 Republican National Convention, delegates heard the news, arriving in North Beach in droves. Soon enough, the movement spread across the country. The New York Times' obituary for Doda reveals that at one time, Doda was likely earning today's equivalent of $4,000 a week from her act.

But references to Doda in Herb Caen's columns over many years reveal a woman constantly negotiating and renegotiating her value, likely out of necessity. In 1972, he wrote that "Carol Doda signed a new one-year contract at the Condor, having got the raise she was threatening to hold in for." Later, as she exited her job as a cheeky spokesperson for KICU in San Jose, she quipped that the channel "is so cheap they make the Condor... look like the Ford Foundation."

When Doda left the Condor for good in 1986, having danced her way to age 49, she did so feuding. Even after her departure, the Club left her name on its sign, so Doda "commanded her lawyer, Haig Harris Jr., to file suit against Condor owner David Benson," Caen wrote. 'It's not fair to the tourists,' pouts Carol. 'They want the real things.'"

Inside the Condor, a poster of Doda remains, the largest of several. In black and white, she bares her 44DD breasts and smokes a cigarette."I began my chilly dancing career as a 19-year-old with modest but perky 34Bs," Doda wrote candidly. "My horizons expanded. I have no secrets. The procedure involved direct silicon injections, which are now banned because the plastic tends to migrate... [but] I never experienced any problems." 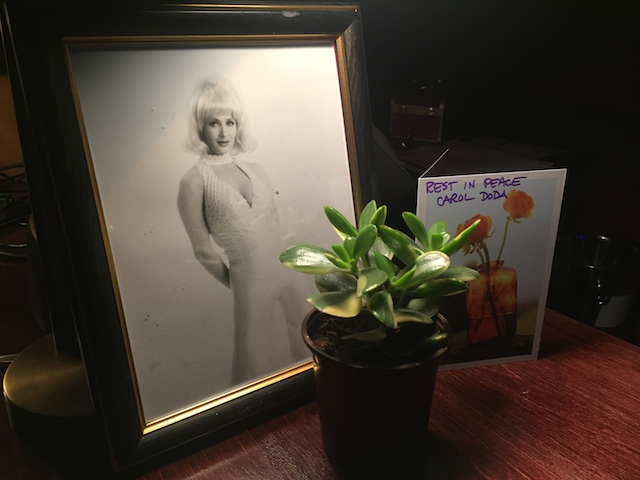 In The Pump House Gang, Tom Wolfe referred to Doda's breasts as "great blown-up aureate morning-glories." That's nice, Tom. Others called them the Twin Peaks, referencing those twin parts of San Francisco's geography. Somewhat inescapably, these are terms of objectification. But there's an argument that Sarah Katherine Lewis voices on Alternet that goes like this. "If a woman chooses to objectify herself — shedding her clothes to obtain power through money — is she helping to eliminate gender inequality or simply degrading herself?"

But to the question "Can stripping be a feminist act?" Lewis basically responds "Well, should it have to be?" As she writes, "the unglamorous truth about my experience as an adult entertainer is that I felt empowered — as a woman, as a feminist, and as a human being — by the money I made, not by the work I did.... I find it interesting that the very people who complain about the objectification of women's bodies are the ones who have little to say about the objectification of poor people's bodies, of all genders."

Until 2013, down the block from the Condor was the Lusty Lady, something of a unicorn as America's lone unionized strip club. The "Lusties," as they called themselves, owned their means of production — and, of course, the business itself. Lily Burana wrote of her experience working there in the Atlantic, "For an enterprising artist, social reformer, or student who was willing to dive into the sex industry but didn’t want to feed her soul to it, the Lusty was a reliable, companionable choice."

Though Doda's image at the Condor serves as a reminder of the Club's past (and, as some dancers told me, an inspiration, though none I talked to had met her) the club today is lurid, not louche. Let's just say it doesn't pass a feminist smell-test. But to be specific, there was the music. Doda was well known for her singing, which could be heard as recently as last year at Tupelo on karaoke nights (they paid her for it, as presumably she insisted). In the 1980s, she was even the frontwoman for a rock band, the Lucky Stiffs, which performed throughout the Bay Area.

"We keep up the musical tradition here," Huinh said of the Condor, and live bands play on weekends. But the typical background soundtrack is nothing short of depressing. A dancer humorously rolled her eyes when Dave Matthews' "Crash" played.

"It's definitely modern compared to what [Doda] was used to," Huinh continued. That's one way to put it, but retro and regressive might be more accurate. The Condor in 2015 struck me as a slightly sickening kaleidoscope for the most leering male gazes, and it likely had to have felt similar in Doda's era, at least on some nights.

Not being an aficionado, I don't have a lot to compare the place to. And the Condor is known, by official city plaque, as "where it all began."

My feelings aside, and although Huinh wouldn't discuss how much dancers at the Condor make, I got the sense that everyone was doing alright for themselves and no one was unhappy to be there. I imagine that's something Carol would have liked to see.

"It's this great mix of classy but also dirty and fun," one young dancer told me, adding that she has no trouble with her rent in the Lower Haight. As far as the clientele, "I try to make connections with the guys, if I can," she said, something which she seemed to have no trouble doing.

"You can’t go on stripping forever," Doda herself acknowledged, but neither can one go on doing anything forever, I'd add. Of Doda's finances, Minolli says "she didn't have a lot of money, I know that for a fact. She may have been in debt, but she was paying her bills. Your beauty and your breasts can only go so far," he said, and Doda no doubt cannily pushed them as far as they might go.

She never married, though Minolli tells me she took up with a widower later in life who left her some money when he himself died a few years ago. For her last act, Doda opened Carol Doda’s Champagne and Lace Lingerie Boutique in San Francisco. People love it on Yelp. "I wait on customers personally," she writes. "Big can be very sexy." And sexy, as Carol knew, can be very powerful.

The trial of Raymond "Shrimp Boy" Chow continues today, and yesterday one of prosecutors' first witnesses who was a former Chow associate who struck a plea bargain in exchange for his testimony finished

—
Feminism And Carol Doda, 'The Susan B. Anthony' Of Stripping
Share this