The controversy over children in restaurants is not new  and in a city with so few children as San Francisco, tension over the topic is pretty inevitable. But a kerfuffle has erupted via a Cole Valley neighborhood Facebook group after an owner of neighborhood fave bistro Zazie posted a statement about parents who bring children under the age of three along to dinner.

Says restaurateur Jennifer Bennett, "This may shock you but choosing to have children means you can't go out to eat for roughly 3 years. Please. Accept. Your. Fate."

An outraged SFist reader and obviously a parent sent in screenshots of the controversial posting, saying, "The subsequent backlash has been strong, with parents feeling that what she said was cruel and totally inappropriate." This reader adds, "Two other parenting groups (Haight St Mamas on Facebook and the Golden Gate Mothers Group) are also expressing outrage, with people promising never to set foot in Zazie again." 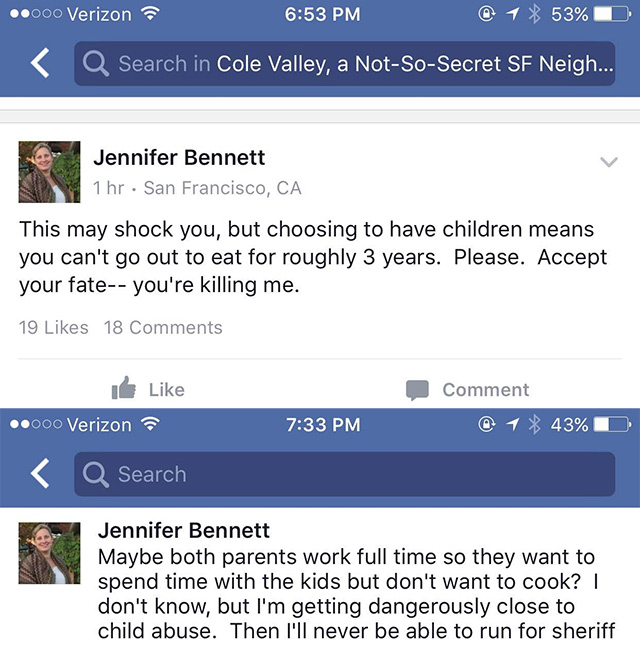 A lot of us are probably going to see Bennett's side of this, too, though, given that outside of Noe Valley, we don't really expect to be dining beside toddlers, and all the noise that that may entail. I feel for the new parents who can not cook, but I also feel for my childless compadres in dining out that I probably don't want to be dropping $60 to $80 on dinner next to the kids' table. Zazie is not, after all, Applebee's.

There are certainly loud and kid-friendly restaurants all over town, they just might not be in walking distances of your new condo? Just saying.

The trend of there being more strollers and tiny babies around town is a real one, though. According to census figures, SF lost about 8,000 school-age children between 2000 and 2010, but gained 3,000 children under the age of 5. The trend has to do with the overall population boom, and middle class families having to flee the city in order to find decent, affordable schools as soon as their kids are out of pre-school.

Update: Ms. Bennett writes in to clarify, "It's taken totally out of context. I NEVER said kids weren't welcome at Zazie." She apparently made the comment, personally, while out at a small sushi bar in her neighborhood. "I was exhausted and annoyed by a table full of toddlers throwing food and screaming. I wasn't at work or posting as Zazie, just as me."

So, to be clear, kids are still welcome at Zazie. However, I think most of us feel her pain, as diners.

Update 2: Via Hoodline, a follow-up comment from Bennett on Facebook surfaced, clarifying that while she may welcome childen at Zazie as she always has, there are (and should be) limits. "Children (6-12 or so) are my favorite guests. They're so curious! And infants are basically ok as long as their parents know they have to take them outside when the crying starts. But toddlers are satanic and it's exhausting."

Update 3: Bennett, whose married name is Piallat, says she's "not sorry" about the comments.

Related: 10 Best Place To Bring The Kids In SF

A San Francisco man was arrested and held without bail Tuesday, after a police raid of his residence uncovered hundreds of images depicting child pornography. According to the Ex officers from the San

A measure that would mandate all pornographic film performers in California wear condoms during shoots will be on the 2016 ballot next November. The Secretary of State yesterday announced that the measure had